MOSCOW: A team of Russian historians and archaeologists have used a Nazi bomber pilot's photograph to help them pinpoint the location of mass graves in Moscow containing the remains of thousands shot by Stalin's secret police. 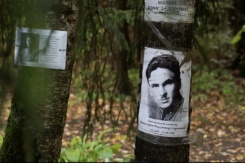 Historians believe some 6,000 people were executed by the NKVD in Moscow's Kommunarka district

The existence of a mass grave in the Kommunarka district in southwestern Moscow first came to light in the dying days of the Soviet Union when the KGB opened up its archives.

It was one of three killing fields in the city used by Stalin's NKVD secret police in the 1930s.

Historians believe at least 6,609 people were shot and thrown into mass graves in Kommunarka between 1937 and 1941.

The gated forested area was once used by NKVD chief Genrikh Yagoda, who had a holiday cottage there.

But he fell foul of the regime and was removed from his post in 1936 and shot in 1938 -- with his body most likely also disposed of in Kommunarka.

Until recently, the mass graves were believed to be located in one area of the forest, where victims' relatives put up a memorial.

But historians now believe the graves' location was misidentified.

No serious archaeological work has been done before in Kommunarka, said Roman Romanov, director of Moscow's Gulag History Museum, who co-led the investigation.

"There was nothing (in Kommunarka) before, people used to pick mushrooms there."

But with a planned opening of a new memorial at Kommunarka, he said historians wanted to check exactly where the bodies were.

Romanov said they used ground-penetrating radar and historic photos to examine the area.

"We had volunteers working to clear the area and a geo-radar following us looking for anomalies in the ground," he said.

An aerial shot of Kommunarka taken by a Nazi pilot flying over Moscow in 1942 -- when the graves were "fresh" -- was key to the investigation.

Crucially, it showed the height of the trees in the area at the time.

Historians came to the conclusion that some of the trees had been planted over fresh graves -- a tactic often used by the NKVD to cover up its executions.

The next step, Romanov said, is to identify in which specific pits the bodies of victims were placed.

Yan Rachinsky, a senior member of rights group Memorial that documents Stalinist crimes, estimates that around 30,000 people were shot in Moscow alone during Stalin's Great Terror between 1937 and 1938.

During a brief period of openness during the Perestroika era in the 1980s, the KGB sent files on Stalin-era victims to journalists and Memorial, Rachinsky said.

In some, the NKVD gives the place of execution as Butovo or Moscow's Donskoye cemetery. Others simply say that the victim's body is "in a pit".

"We believe those with no (marked) place of execution are in Kommunarka," Rachinsky said.

High-ranking officials and scientists were among those shot and hastily buried in Kommunarka.

"Almost the entire Mongolian government is there," Rachinsky said. Mongolia was a Soviet satellite country.

Many officials from the Baltic states of Estonia, Lithuania and Latvia were also executed there after their countries were occupied by the USSR in 1940.

Rachinsky said that over a thousand of those believed to be buried in Kommunarka remain unidentified after the Russian security services closed access to Soviet-era files.

"Suddenly, they stopped sending us the files," he said, accusing the present-day authorities of a lack of interest in uncovering Soviet-era crimes.

"Our country is still not ready to declassify the materials of another country: the USSR," he said.

"The state is responsible for what happened here and it struggles to define its position," said historian Sergei Bondarenko, whose great-grandfather was shot in Kommunarka.

He predicted that only a "middle-ranking" government official would attend the opening of a new memorial this month.

"In my view it should be the president, because this was one of the biggest killing fields in Moscow," he said.

The opening last year of a memorial to victims of political repressions in central Moscow was attended by President Vladimir Putin, he pointed out.

Romanov said he wants other regions to follow the "positive precedent" of Kommunarka to find the "exact borders" of their Stalin-era mass graves.

"These places are still secret. People don't even know where (the bodies) are. Often all they know is that they are inside a huge forest," he said.

The aim, he said, is to identify exactly "who is buried where in all Russian regions."

"This might sound a bit Utopian. But it is necessary."