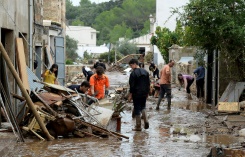 A massive clean-up was under way in the mud-covered streets of Sant Llorenc des Cardassar, one of the worst-hit towns, after intense, driving rain on Tuesday afternoon surprised locals who only had a precious few seconds to react before a torrent descended.

Mangled vehicles, wet mattresses, wrecked furniture and trees torn right out from their roots cluttered the town, 60 kilometres (40 miles) east of the island's capital of Palma, while locals tried to recover lost valuables from the wreckage of their homes with the help of volunteers.

Emergency services in the Balearic archipelago tweeted that six men and four women were killed. A British couple and a Dutch woman were among the dead.

The child was in a car in Sant Llorenc with his mother, who was one of those killed, a spokesman for the central government´s representative in the Balearic Islands said. The boy's sister survived.

A helicopter and heat-sensing drone joined the search once daylight broke, TVE reported.

Muddy waters rushed down roads, houses were flooded and vehicles piled up on top of each other after the Mediterranean island was pounded with rain in just a few hours, video footage showed.

One of the male victims could not yet be identified but is also believed to be a foreigner.

Pedro Sanchez, a Sant Llorenc resident, said he jumped into his car when he saw the murky flood water rise.

"But I saw that the water was taking me away," the 40-year-old told AFP.

"It rose two metres (six feet) in 30 seconds, and luckily the water pressed me against a wall," he said, standing in a road blocked by a jumble of bed frames and debris.

"I got out through the car window and got to safety on the roof of a neighbour's house."

He said he was lucky to survive, and his car wasn't too damaged.

Many people have been sleeping in sports centres since the flash floods.

As emergency vehicles came and went, residents used brooms to chase out water from their homes, or tried to get rid of the thick mud with hoses.

Spanish tennis star Rafael Nadal, who is from the affected area in Majorca, was among the volunteers helping with the cleanup operation.

Pictures and videos posted on Spanish media showed the 32-year-old, wearing boots and white gloves, mopping up the floor of a warehouse on Wednesday.

He helped out for "several hours", said Sanchez.

Nadal also announced on Instagram he was offering to open up his sports centre and tennis academy to people made homeless by the floods.

"Our most sincere condolences to the loved ones of the victims of the serious floods in San Llorenc," he wrote.

Emergency services sent out tweets in Spanish, Catalan, English and German in a reflection of the prevalence of tourists and foreign residents on the island.

Many more foreigners live in the archipelago.

His government is expected to approve later on Thursday financial help for affected zones.

The regional government of the Balearic Islands declared three days of mourning.

Meanwhile in neighbouring France one person is missing near Sainte-Maxime after his car was washed into the sea by floods as violent storms hit the French Riviera, local officials said.