KUALA LUMPUR: Leaning back in his chair and admitting he is feeling every one of his 93 years, the world's oldest leader Mahathir Mohamad says his second stint as Malaysian premier is taking its toll as he grapples with everything from fending off China to paying down a mammoth national debt.

"I should be dead now, actually," joked the nonagenarian leader in an interview with AFP Thursday.

The veteran statesman is as sharp and straight-talking as ever, and not one to shy away from offering frank views on controversial issues, including gay rights and anti-Semitism.

But it's not been an easy ride for Mahathir -- who has suffered increasing health problems in recent years -- since his ramshackle alliance won a shock victory at May elections and toppled the corruption-plagued regime of Najib Razak.

Since then, a host of former leaders have been been arrested for corruption, many linked to the novel-worthy political saga around sovereign wealth fund 1MDB, in which billions of dollars were allegedly looted in a fraud stretching from Singapore to Switzerland.

Aside from the crackdown on corruption, Mahathir is seeking to pay off a US250 billion national debt, and has cancelled a string of costly China-backed mega-projects, risking the ire of the world's number-two economy.

On top of that, his own coalition is an uneasy alliance.

It was cobbled together as a means of ousting Najib and is packed with politicians who once vehemently opposed him, including former nemesis Anwar Ibrahim, now the presumptive successor to the premiership.

"It is exhausting," conceded Mahathir.

"This time around I have to do more work than the first time I became prime minister... the whole government machinery has been destroyed almost." 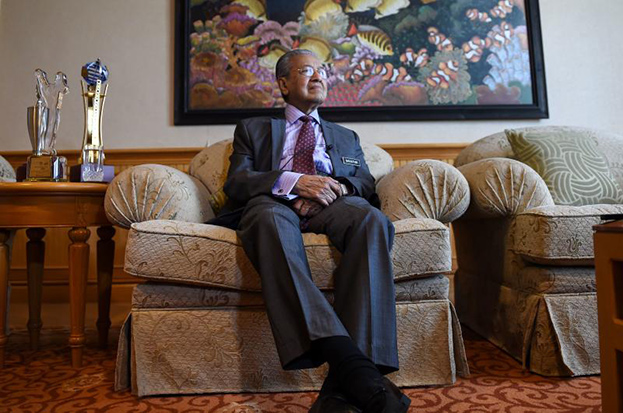 Mahathir's victory took almost everyone -- including his own alliance -- by surprise, and amounted to a political earthquake that ousted the Barisan Nasional (BN) coalition after six decades in power.

After years of graft scandals and divisive racial politics in the multi-ethnic country, voters finally had enough of BN, with the 1MDB scandal the tipping point for many.

Najib's fall from grace has been swift. He and his luxury-loving wife Rosmah Mansor have been arrested -- Najib has now been hit with a total of 38 corruption charges -- and both are likely facing long jail terms.

A stash of cash, jewellery and hundreds of designer handbags worth over $270 million was seized from properties linked to the pair.

Other figures aligned with the previous government, from the central bank chief to the attorney-general, have left their positions, and Mahathir and his team are scrambling to fill big holes in the administration.

"I had to get rid of people who in the past, under the previous government, had... politically been involved with government," said Mahathir in the interview at the office of a foundation that he heads the in administrative capital Putrajaya.

"A lot of things were spoiled by Najib in his effort to use every institution to ensure his winning the election."

Adding to his difficulties, Mahathir has risked souring relations with Beijing by cancelling Chinese-financed railway and gas pipelines projects, which were widely viewed as dubious deals struck by Najib as he sought money to pay off debts.

"We just cannot afford it," Mahathir said of the deals, but insisted relations with China were still good.

Constant speculation about whether Mahathir will stick to a promise to hand power to Anwar within two years of taking office is also proving a major distraction.

The pair's stormy relationship has loomed over Malaysian politics ever since Mahathir sacked Anwar, then a powerful deputy premier, in the 1990s, and Anwar was thrown into jail on questionable sodomy and corruption charges.

Following May's election victory, Anwar was released from jail and pardoned -- he had been imprisoned again under Najib's regime in 2015 -- and earlier this month was re-elected to parliament.

Mahathir brushed off the suggestion that Anwar's return to frontline politics could cause tensions: "I have worked with him before... I have no problem, I can work with everybody."

Mahathir is enjoying a long honeymoon after Barisan National's defeat but critics remain concerned about his own authoritarian tendencies.

During his first stint as premier from 1981 to 2003, he was accused of undermining the judiciary and other institutions, the press came under attack and political opponents were thrown in jail.

He remains unapologetic about some of his more controversial views, such as that same-sex marriage is unacceptable in Malaysia, and that Jews are "hook-nosed".

But as age catches up with him, Mahathir admitted he will have no choice but to relinquish power.

And he insisted he would stick to his pledge to hand power to Anwar: "I have made a promise; I will keep my promise."

Chiang Mai University on Thursday rejected a bid to remove the Sculpture of Light, an art display bearing the likeness of His Majesty King Bhumibol Adulyadej The Great.

DUBAI: The glitzy emirate of Dubai broke the record for the world's largest fountain on Thursday, as the Gulf city seeks to boost its hard-hit tourism sector amid the coronavirus pandemic.

The Transport Ministry has instructed the State Railway of Thailand (SRT) to improve its income-generating capacity to pay off its more than 160-billion-baht debt, Transport Minister Saksayam Chidchob said on Thursday.

Convalescent plasma of limited use for Covid-19: study