US President Donald Trump and North Korea's leader Kim Jong Un walk together before their working lunch during their summit at the Capella Hotel on the resort island of Sentosa, Singapore June 12, 2018. (Reuters file photo)

WASHINGTON: US President Donald Trump said Saturday he hoped to organise a second summit with North Korean leader Kim Jong Un in early 2019, perhaps as soon as January or February.

Trump told reporters traveling home to Washington with him aboard Air Force One from Argentina that "three sites" were in consideration for the meeting, a follow-up to their historic summit in Singapore in June.

When asked about a future meeting, Trump said: "I think we're going to do one fairly (soon) -- into January, February, I think."

Trump had been in Buenos Aires for the Group of 20 summit.

When asked Saturday if he would ever host Kim in the United States, the Republican president replied: "At some point, yeah."

In June, Trump and Kim opened up dialogue on denuclearization of the Korean peninsula after months of trading military threats and pointed barbs.

The two leaders signed a vaguely worded document on denuclearisation of the peninsula, but progress since has stalled as Washington and Pyongyang spar over the meaning of the document.

US Secretary of State Mike Pompeo was due to meet with a top North Korean official in early November, but the meeting was abruptly put off, with North Korea insisting that Washington ease sanctions.

On Friday, Trump discussed the situation with South Korean President Moon Jae-in on the sidelines of the G20 summit.

They agreed on the need for "maintaining vigorous enforcement of existing sanctions to ensure the DPRK understands that denuclearisation is the only path," Sanders said, using the North's official name, the Democratic People's Republic of Korea.

But differences have emerged between Washington and Seoul on how to proceed with Kim, as the dovish Moon has long favored engagement with the North. 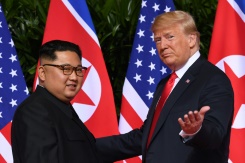 North and South Korea have begun to remove landmines and destroy military bunkers at parts of their common border as part of efforts to improve long-strained relations.

They have also begun work to reconnect a train line and repair another rail link across the border.

Despite the warming ties, it remains unclear whether Kim will make his first-ever visit to the South this year, as Seoul is hoping.

Kim agreed to travel to Seoul after hosting Moon in Pyongyang in September for their third summit this year.

But prospects of a fourth Moon-Kim meeting have recently dimmed, with negotiations on denuclearising the North grinding to a halt.

In his talks with Trump in Argentina, Moon earned some support for the Seoul summit from the US leader -- perhaps in a bid to entice Kim to make good on his pledge.