MADRID - The violence-hit Copa Libertadores final between Boca Juniors and River Plate will finally conclude in Madrid on Sunday, thousands of miles away from Argentina and 15 days later than planned. 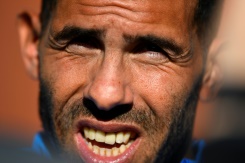 After postponements, bitter rows and court action that have tarnished the reputation of South American football, Argentina's two greatest football rivals will kick off the second leg in Real Madrid's Santiago Bernabeu stadium at 1930 GMT.

The teams' good-natured training sessions in Madrid this week have been a world away from the rocking Bombonera stadium in Buenos Aires that was packed for an open training session before the original fixture was due to be played last month.

That game had to be postponed twice after River fans attacked the Boca team bus. CONMEBOL, the South American football federation, chose to relocate to Spain.

A final for the most prestigious prize in South American club football should have been something to savour, but players have made clear their sense of regret that events have forced them far from home and their supporters.

"It is a weird final," said Boca striker Carlos Tevez, once of Manchester United and Manchester City.

"To play a match between Boca and River in Madrid, it's weird."

River goalkeeper Franco Armani said: "We would have liked to play the game at home, on our pitch, in front of our fans, who deserve it, but the decision is made. We have to make the best of it."

CONMEBOL chose Madrid as a "neutral" host city, pointing to the largest Argentinian community outside Argentina. The city's other major stadium, the Wanda Metropolitano, will host the Champions League final in June.

For many, however, the decision to displace the most important club match in Argentina's history is a national embarrassment -- after all, the Copa Libertadores was named after those that secured independence from countries like Spain in the early 19th century.

"Unfortunately for me, this match has lost importance in my heart," Real Madrid's Argentinian coach Santiago Solari said on Wednesday.

Boca and River had initially refused to come. Boca believe River should have forfeited the trophy and took their case to the Court of Arbitration for Sport, but their appeal was rejected on Saturday.

River, meanwhile, have lost the home advantage enjoyed by Boca in the first leg, which finished 2-2, not to mention economic benefits, despite CONMEBOL pledging to compensate them for any lost revenue.

River continue to blame the security arrangements for failing to stop their fans from attacking the Boca bus as it travelled to the Bombonera. Several Boca players needed hospital treatment for eye injuries caused by glass shards and others said they suffered from smoke inhalation.

"It was the security system that failed, absolutely and totally," River's club president Rodolfo D'Onofrio told El Pais on Friday. "River are the victims."

The real losers, however, are probably the thousands of fans let down and now left at home in Argentina.

Some have travelled, including Agustin Giacone, a Boca supporter who arrived in Madrid on Wednesday. "It's going to be a great party," he said. "Argentinians don't want to spoil the name of Argentina anymore."

"We need time," he said. "We need matches of this quality played in Argentina or South America to show that we have matured.

"Today we should be talking about how River and Boca made Argentina proud," Schelotto said. "Again, we have lost to violence."

For each club, the 20,000 tickets allocated to fans in Spain and elsewhere sold out within hours but some of the 5,000 for residents in Argentina remain available. The cost, and short notice, is likely to have put them off.

Inside the Bernabeu, a vacant block of seats will act as a buffer between the two sets of supporters. Outside, the road that runs from the city centre to the stadium will be closed from 9am local time, as police seek to keep them separate. Around 2,500 police officers will be on duty.

If the match goes off peacefully, CONMEBOL will claim success in at least ensuring it has been played.

For Spain, there would be a boost to their 2030 World Cup bid, at the direct expense of the Uruguay-Argentina-Paraguay ticket, another lead contender.

For River and Boca, the winner will join their hosts, Real Madrid, at the World Club Cup in the United Arab Emirates later this month. River would also qualify for next year's Copa Libertadores.

Toxic PM2.5 dust levels in Bangkok and surrounding provinces from Monday to Saturday are likely to improve thanks to the rather strong southerly wind that will blow away the dust, according to the Pollution Control Department's Sunday press release.