HANOI - Two girls sprint from a hair salon into a car that will lead them back to safety in Vietnam -- a snapshot of the daring rescues taking place each month to free women and girls from forced marriages or sex slavery in China. 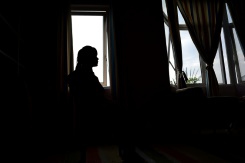 Vu, whose name has been changed, knew trying to escape could mean being beaten or even killed by her pimp

Filmed on a shaky camera phone, the successful rescue saved the Vietnamese teenagers from a brothel in China, where a huge surplus of males has fuelled the lucrative trade for brides and sex workers.

"No one wants their business to be broken," says a rescuer from Blue Dragon, a Hanoi-based non-profit.

Blue Dragon has helped bring about 400 trafficked women and girls home from China since 2007.

They are among tens of thousands trafficked into China from impoverished pockets of Vietnam, Cambodia, Myanmar and Laos.

They are tricked, lured or kidnapped and sold as wives and prostitutes across the border, some ending up deep inside the tightly-controlled Communist country.

Rescues are a complicated and all-consuming job, says the Blue Dragon rescuer whose identity has been concealed for safety reasons.

The stress is constant and the phone buzzes around the clock.

"But I couldn't walk away," the rescuer says.

"Imagine your child didn't come home at dinner time. What would you do?"

Victims reach out via Chinese messaging services like WeChat and QQ or call the non-profit -- if they can get their hands on a phone.

"I was trafficked to China please help me," reads one text. "I'm praying for a miracle," says another.

But most girls -- especially sex workers -- are barred from contact with the outside world; an escaped girl means thousands of dollars lost for traffickers.

With risks high, each rescue can take months to plan and execute.

One girl faked illness and checked into hospital where she called Blue Dragon rescuers, leading them to a remote corner of China where she had been trafficked as a bride.

Another who had been sold into a brothel secretly used customers' phones to contact rescuers before evading bouncers by escaping via a back door.

Blue Dragon helps to bring home up to eight people a month and gets one or two desperate pleas for help each day.

The organisation keeps photos and videos of successful missions -- weeping mothers reunited with daughters, teenaged girls grinning widely after being saved -- morale-boosting reminders of their work.

"If we don't get her out of there she's stuck, she's in slavery," said Michael Brosowski, the Australian founder of Blue Dragon, which also rescues and rehabilitates street kids, sexual abuse victims and other kids in crisis.

Le Thi Vu knew trying to escape could mean being beaten or even killed by her pimp, who kept her in a brothel for four months in China's Guangxi province where she was forced to sleep with up to 12 men a day.

Traumatised and fearing pregnancy, she secretly bought a phone and got in touch with her family who connected with Blue Dragon.

She had no idea of her location and could not read the Chinese street signs outside, but Vu -- whose name has been changed -- found a phone number for a hotel across the street and relayed it.

She went into a hair salon next to the brothel with another Vietnamese woman and suddenly made a dash for the waiting car, praying not to get caught.

Within days the pair were back in Vietnam.

"I felt like I had come back to life again, I was so happy to see my mother," said Vu, now 21 and training to be a spa technician.

Rescues have helped Blue Dragon prosecute 76 traffickers over the past five years in Vietnam, where the maximum sentence for selling people outside the country is 20 years.

Vu's traffickers -- her friend and her friend's boyfriend -- were both jailed.

Nguyen Trang was saved last year, eight months into a forced marriage to a poor Chinese labourer in Hunan province.

She slipped out of the house early one morning to meet a Blue Dragon contact, who guided her onto a bus bound for the border.

She was offered $2,100 not to testify against her trafficker -- a former boyfriend who sold her to brokers in China.

But Trang, also using a pseudonym, refused and her ex was jailed in August for seven years.

Today, the slight 20-year-old works in a Hanoi restaurant and has tried to put the dark chapter behind her.

"In Hunan my spirit hurt... now I can live again," she says.