WASHINGTON - President Donald Trump is due to meet Friday afternoon with China's top trade negotiator, as talks continue to try to defuse the escalation of the tariff war between the world's economic superpowers. 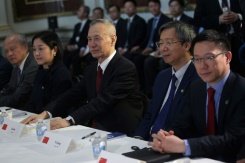 Chinese Vice Premier Liu He (L) and Chinese central bank Governor Yi Gang during negotiations on Thursday in Washington. Liu is due to meet US President Donald Trump on Friday, February 22, 2018

Global stock markets were higher as the two sides continued to project optimism, with Trump's personal involvement a likely signal of the White House's confidence in a successful outcome.

Just a week remains to avoid a sharp increase in US duty rates on more than $200 billion in Chinese exports -- though Trump has suggested he could extend this deadline if needed.

The fourth round of talks have been underway all week, with senior officials meeting as of Thursday. The White House said Trump would meet with China's Vice Premier Liu He, who is leading the delegation from Beijing.

The harder parts -- structural changes to China's economy including an end to Beijing's massive intervention in markets and scaling back its ambitious industrial strategy for global preeminence -- are another question.

William Reinsch, a former senior Treasury official for trade in the administration of President Bill Clinton, told AFP it was unclear if Trump would seek to force Beijing to make such deep concessions.

"Will he hold out for the whole loaf? I don't think anybody knows whether he'll do that. I don’t know if he knows," said Reinsch.

A risk for Trump, said Reinsch, is whether any agreement holds and the Chinese honor their commitments.

"If it unravels and we have a string of unmet commitments and then US retaliation right before the election, we're kind of right back where we started," he said.

In a sign of how high the stakes could be, Christine Lagarde, head of the International Monetary Fund, called the US-China trade tensions a "major risk" to global economic growth.

Since July, the countries have hit out with tariffs on more than $360 billion in two-way trade.

By themselves, Lagarde told the US radio broadcast Marketplace, the tariffs are having "minimal" effect on global trade but they are also damaging business confidence and weighing on stock markets.

The two sides are working towards memorandums of understanding to formalize their commitments ahead of a possible meeting between Trump and Xi.

China may have to remove its tariffs in order to increase purchases of US exports while Trump may feel no pressing obligation to lower the tariffs he imposed on Chinese imports last year, he said.

Global stock markets have been battered since last year through the ups and downs of the trade war but have tended to react positively to signs relations at least will not deteriorate further.

Word of progress had Wall Street in a cheerful mood, with the benchmark Dow Jones Industrial Average up 0.6 percent at 1600 GMT.