MILAN - British designers on Saturday presented fashion collections for two Italian houses at Milan fashion week, with one inspired by shoes as key items, and the other by tiger motifs. 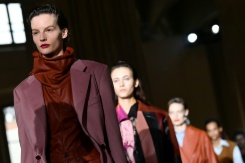 How would Salvatore Ferragamo be designing now?

Andrew, who joined the group in 2016 and previously headed up the women's wear division, told AFP he had been inspired by plunging into the group's archives.

"Everything I do in Ferragamo is dressing from toe to head: the shoe dictates everything," he said.

"I started from this particular shoe made with patchwork of colour and material from 1942 and it inspired the colour palette," he added.

"Given that it's a shoe from 1942 but it looks much more modern than that, Salvatore was so ahead of his time," said Andrew, referring to the founder of the brand.

"I thought, 'How would he be designing now?"

The full range of the Florence-based fashion house was on display, presenting a simple, unpretentious luxury range: suede leather, nappa, lizard or snake on trousers, jackets, coats and shirts.

Monochrome trousers were zipped around the body, while cashmere blankets and handmade wool sweaters conveyed a sense of simple and spontaneous luxury.

It was only on Thursday that Andrew was appointed creative director. Under his direction, French designer Guillaume Meilland will continue to run the creative output of the men's collection.

The Ferragamo autumn/winter collection was presented in the Rotonda della Besana, a desanctified church from late Baroque period.

Surridge, who has been creative director at the Florence-based fashion house since 2017, told AFP his inspiration had been "instinctive".

"I started to look at the idea of status in general and the memory of status of the idea of refinement, of beauty to make something exquisite."

He went back to print and underline print, "not just on silk dresses but on coats with jacquards" to "maximise the pattern" without making it feel heavy, he added.

"I wanted to define a new modern beauty," Surridge added.

Surridge carries on the style started by Cavalli in the 1970s combining eccentricity and glamour.

Surridge made the tiger motif in various permutations a recurring theme in this collection, reinterpreting it in a variety of contexts: midnight blue, bougainvillea, mustard on one side and in a variant of pastel colours on the other.

The same pallette informed the whole collection, including coats, jackets and trousers.

The python motif, another element dear to the Cavalli brand, appeared as jacquard hand-painted or embroidered in sequin.

Evening dresses, with their ultra-feminine and fluid silhouettes, evoked the 1920s.