TOKYO - The former high-flying head of collapsed bitcoin exchange MtGox will learn his fate Friday as a Tokyo court hands down its verdict on charges of faking digital data and embezzling millions of dollars. 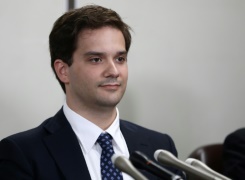 Prosecutors have called for a 10-year jail sentence for French-born Mark Karpeles, 33, who denies the charges.

Karpeles is alleged to have repeatedly manipulated computer data over several years while embezzling a total of 341 million yen ($3 million) of clients' money deposited at the company.

Prosecutors claim he splashed the embezzled money on a 3D-printing software business unnecessary for MtGox, as well as on personal expenses, including some six million yen ($54,000) for a canopy bed.

He also spent millions of yen on arranging overseas trips for his estranged wife, as well as utility bills and cleaning services at his luxury apartment that he reportedly rented for $11,000 per month, prosecutors allege.

MtGox was shut down in 2014 after 850,000 bitcoins (worth half a billion dollars at that time) disappeared from its virtual vaults, a mystery that remains unsolved.

The disappearance left a trail of angry investors, rocked the virtual currency community, and dented confidence in the security of bitcoin.

At one point, MtGox claimed to be handling around 80 percent of all global bitcoin transactions.

The spectacular failure of the exchange caused a dramatic slump in the value of bitcoin but the cryptocurrency rallied to an all-time high of near $20,000 in December 2017 before dropping off sharply.

Japan issued new regulations after the MtGox case, but the exchange Coincheck was forced last year to refund customers more than $440 million in virtual currency that disappeared from its holdings.

During the trial, Karpeles apologised to customers for the company's bankruptcy but denied both data falsification and embezzlement.

"I swear to God that I am innocent," Karpeles, speaking in Japanese, told the three-judge panel hearing when his trial opened.

Karpeles has said the bitcoins were lost due to an external "hacking attack" and later claimed he had found some 200,000 coins in a "cold wallet" -- a storage device not connected to other computers.

"Most people will not believe what I say. The only solution I have is to actually find the real culprits," he told reporters after the hearing.

The charges against the former CEO are not directly related to how the MtGox losses came about.

Satoshi Mihira, chief attorney at Mizuho Chuo law firm, said: "If it was an outside hacker who stole the currency, it's a problem. But if he stole even part of the money, it would be embezzlement."

"His defence counsel needs a high level of evidence to win an innocent verdict," he told AFP.

"If he's found guilty, it is possible he will get a jail term considering the significant money losses (suffered by customers)," said the lawyer, an expert on cryptocurrency issues.

The odds are stacked against Karpeles as the vast majority of cases that come to trial in Japan end in a conviction.

The Frenchman was first arrested in August 2015 and, in an echo of another high-profile case against former Nissan chief and compatriot Carlos Ghosn, was re-arrested several times on different charges.

Karpeles eventually won bail in July 2016 -- nearly a year after his arrest -- reportedly paying 10 million yen to secure his freedom pending a trial, which began in July 2017.

During his time on bail, Karpeles has been active on social media -- notably voicing doubts about bitcoin and replying to some media questions about conditions in Japanese detention centres.

However, he has largely avoided commenting on his case in detail.

The court is expected to issue a verdict Friday and, if it finds Karpeles guilty, will likely hand down a sentence at the same time.

However, even if he were to lose the case, he has the right to appeal, which would keep him on bail.

100 days after military seized power in Myanmar, neighbouring country has plunged into chaos as army struggles to control widespread opposition to its rule.