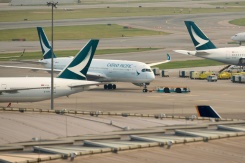 Cathay Pacific has embarked on a massive overhaul as it looked to end two years of losses.

The recovery, which compares with a $160 million loss in 2017, also came in a year that saw it suffer an embarrassing data breach that dented its reputation and could prove costly.

The result was in line with a preliminary announcement last month that the airline was back in the black as investors took comfort in the turnaround after two grim years for Asia's largest carrier.

"Overcapacity in passenger markets resulted in intense competition with other airlines, particularly those from mainland China," said chairman John Slosar in a statement with the latest report.

Shares in the firm jumped 1.8% in Hong Kong after the announcement.

Cathay has been overhauling its business after posting its first losses for eight years in 2016, firing more than 600 workers and paring overseas offices and crew stations as it faced stiff competition from budget rivals in China.

It also added international routes and better on-board services in a bid to compete with well-heeled Middle Eastern long-distance carriers.

Slosar said "the forecast strength of the US dollar and uncertainty due to geopolitical discord and global trade tensions" are expected to dampen passenger and cargo demand in the coming year.

However, he added the company remained "confident" in its transformation programme.

Cathay confirmed earlier this month it was in talks to buy a stake in Hong Kong Express as it competes to counter the growth of budget carriers in the region, but the report on Wednesday did not mention the potential acquisition.

Hong Kong Express -- the city's sole budget carrier -- is owned by HNA Group, a struggling Chinese conglomerate that has been looking to lower its debt pile. The group also owns Hong Kong Airlines, another Cathay competitor that has found itself in financial difficulties in recent months.

Despite the turnaround, the year was not without trouble for Cathay.

In October it sparked outrage when it admitted to a massive breach five months after hackers made off with the data of 9.4 million customers, including some passport numbers and credit card details.

The airline faces potentially steep payouts in Europe, which boasts strong protection laws and financial penalties for companies that do not swiftly own up to data breaches.

British-based law firm SPG Law has already launched a group action against the carrier over the breach to help customers seek compensation.

This year Cathay's website mistakenly offered first and business class flights for a fraction of their value in two high-profile and costly blunders.