HONG KONG: Asian markets plunged on Monday after a sharp sell-off on Wall Street fuelled by concerns about the global economy and a possible recession in the United States. 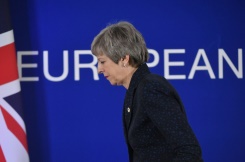 Theresa May is facing a crunch week as she tries to push through her Brexit deal for a third time, with reports that some of her cabinet colleagues are plotting to oust her.

There appeared to be very little reaction to news that an investigation found no evidence of collusion between Donald Trump's election campaign and Russia, which observers said removed some uncertainty from markets.

After a broad-based rally since the start of the year built on hopes for China-US trade talks and a more dovish Federal Reserve, dealers have been spooked by signs of a worldwide slowdown.

"It's pretty clear we've seen a shift in momentum," said Michael McCarthy, chief market strategist at CMC Markets Asia Pacific. "What changed Friday was that there was a strong response to the weakness in growth."

US and European equities went into reverse Friday as the yield on three-month US Treasury bonds fell below those for 10-year notes -- the first time this had happened since before the global financial crisis in 2007.

The yield curve is closely watched since it has inverted prior to recessions in recent decades.

The rush to the 10-year US bond market followed weak manufacturing data out of the US, eurozone giant Germany and France.

That came days after the Fed's announcement that it was unlikely to lift interest rates this year owing to unease about the US and global economy.

"Realistically, the European data has generally been poor for most of the year anyway, so this in itself isn't news," said OANDA senior market analyst Jeffrey Halley.

"The US data has been middling, but both confirm what everyone already knew, the global economy is slowing down after a 10-year quantitative-easing-induced bull run," he added, referring to the massive programme of post-crisis stimulus.

All three main indexes on Wall Street ended sharply down, while London and Frankfurt were both 2%off.

The losses filtered through to Asia, where Tokyo was hammered 3.2% by the break owing to a surge in the yen, which is considered a safe haven in times of turmoil.

There was also heavy selling in Wellington, Manila, Taipei and Jakarta.

"Investor pessimism is growing as are recessionary indicators from the bond markets," warned Nick Twidale at Rakuten Securities.

The pound was facing fresh pressure with Prime Minister Theresa May's political future hanging in the balance as she looks to push her Brexit deal through parliament for a third time.

She has been given by EU leaders until April 12 to win backing for the agreement or find a viable alternative that could include a lengthy extension to the final divorce.

However there are reports that members of her own cabinet are plotting to oust her and were planning to confront her at a crucial meeting later Monday.

On oil markets, the prospect of a global slowdown dug into prices, with both main contracts extending the losses of more than one percent suffered on Friday.

The losses sent regional energy firms tumbling, with Hong Kong-listed CNOOC diving 3.3%, while Inpex in Tokyo was 4.4% lower and Sydney-based Woodside Petroleum 3% off.