Facebook to deploy new transparency tools ahead of European elections

PARIS - Facebook announced on Friday changes to the way political advertisements are handled on the social media site ahead of the upcoming European Parliament elections. 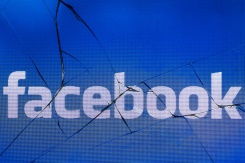 "We are introducing some new tools to help us deliver on two key goals that experts have told us are important for protecting the integrity of elections: preventing online advertising from being used for foreign interference, and increasing transparency around all forms of political and issue advertising," said Richard Allen, vice president for Global Policy Solutions at Facebook, in a statement.

The tools have been used since last year in other countries where elections have been held, including the mid-term polls in the United States, and votes in Brazil and India.

Here are some of the key measures that will be applied on Facebook or on Instagram during the campaign for the May 23-26 European elections:

- All EU advertisers will need to be authorised in their country to run ads related to politics and issues, a move intended to be a barrier to potential election interference from outside a country.

- All ads related to politics or issues must be clearly labelled, including indicating who is paying for the ad, and for any business or organisation, their contact details.

- Facebook will block all political or issue ads that have not been properly registered from mid-April.

- A new tool will be available called Ad Library where all the ads that have been classified as relating to politics or issues will be kept for seven years. Clicking on "See Ad Details" will reveal the number of times the ad was viewed and demographics about the audience reached including age range, location and gender.

Allan noted, however, that these changes would not entirely prevent abuse.

"We’re up against smart, creative and well-funded adversaries who change their tactics as we spot abuse, but we believe that they will help prevent future interference in elections on Facebook," he said.