Space at a premium: Shelters at a refugee camp in Bangladesh’s Cox’s Bazar are crammed on slopes.

The Rohingya crisis, a mass exodus of Muslims in Myanmar prompted by the government's bloody crackdown in 2017, has been a difficult issue for the international community to tackle.

Thailand, the 2019 chair of the Association of Southeast Asian Nations (Asean), a grouping of which Myanmar is a member state, is expected to play a constructive role in creating an atmosphere more conducive to negotiation, and bringing superpowers like the US and China to the negotiating table.

"The United States and China have greater leverage in negotiating with Myanmar," said Pithaya Pookaman, a former Thai ambassador to Bangladesh.

According to Mr Pithaya, Thailand must know how to play the role of a non-intrusive facilitator to help Bangladesh and Myanmar work together.

"The Asean charter stipulates that members must not be involved in one another's internal affairs. As the current Asean chair, Thailand should not raise the issue of the Rohingya crisis in the Asean meetings to avoid embarrassing Myanmar in front of other members, which will ruin our relationship," he said during a press trip sponsored by the Bangladesh government, which was held between April 13-18 in Cox's Bazar, the coastal town which hosts one of the largest refugee camps for Rohingya Muslims.

Mr Pithaya also advised the government not to raise the issue during the Bay of Bengal Initiative for Multi-Sectoral Technical and Economic Cooperation (Bimstec) because "it will run the risk of hurting its members Bangladesh and Myanmar".

It does not mean that Thailand must stay silent, however, just to avoid upsetting its close neighbour. 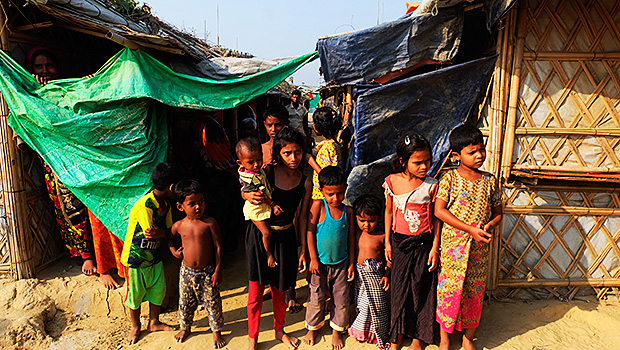 A welcome smile: Rohingya children smile as a group of foreign journalists visits their shelters at the refugee camp.

"If Thailand wants to discuss the Rohingya crisis with Myanmar, it can do so informally. If need be, leaders or foreign ministers can have a private conversation," he said, adding that Thailand must be considerate of its neighbour.

For Mr Pithaya, the Rohingya issue is complex as it involves three stakeholders, each with its own needs.

"The Rohingya want to return to their homes in Myanmar. Bangladesh also wants to see these refugees returned, but it will never send them back home involuntarily. As for Myanmar, it has its own internal security needs," he said.

The way Myanmar's government is handling the issue might not please the international community, but the stance of the government reflects the overall sentiments of local people towards the Rohingya, said Mr Pithaya.

"The root cause of the problem is that the Muslim Rohingya in Myanmar cannot assimilate. Unlike other ethnic minorities, they adhere to their own religion and cannot integrate into a Buddhist majority. Most importantly, their militant extremists threatened local people and intensified the conflict," Mr Pithaya said.

"Myanmar leader Aung San Suu Kyi has faced harsh criticism, but I think she is trying to save the majority. What is the point of the government if it fails to maintain national security? What sparked genocide in Myanmar? We should give a fair hearing to all sides," he said.

ASEAN SHOULD PLAY A ROLE

Critics have called for Asean to exert more pressure on the Myanmar government.

"The Asean bloc is not involved in politics, but it has become involved with the Rohingya crisis because Myanmar is a member country," Mohammed Mizanur Rahman, the deputy secretary of the Additional Refugee Relief and Repatriation Commissioner (RRRC), told the Bangkok Post.

Since 2015, over a million Rohingya have fled from their homes in Rakhine state to nearby Cox's Bazar. Currently, the area around Cox's Bazar is classified as the world's largest refugee settlement, with over 1.1 million Rohingya who have settled in southeast Bangladesh. Over the past few years, Bangladesh and Myanmar have formed a Joint Working Group (JWG) to facilitate the repatriation of the Rohingya.

"We are negotiating with Myanmar. We have signed many agreements. The Myanmar government is now building the repatriation infrastructure," said Mr Rahman, adding the JWG will hold a meeting on Friday in Nay Pyi Taw to follow up on the repatriation of the Rohingya. 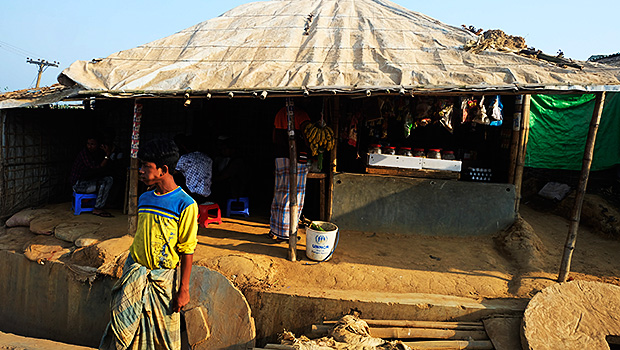 Getting in supplies: A makeshift shelter has been turned into a grocery store at a refugee camp in Cox’s Bazar of Bangladesh. (Photo by Thana Boonlert)

The Bangladesh government has felt the burden of hosting the refugees.

"The sheer bulk of refugees has become a burden to our land. Bangladesh is one of the world's most populated countries. Besides, the Rohingya strain has afflicted our tourism industry," Hasan Mahmud, Bangladesh's information minister, told the Bangkok Post.

AK Abdul Momen, the foreign minister of Bangladesh, admitted the lingering problem will have a negative impact on Bangladesh and the whole region. However, he is still hopeful the Rohingya can be successfully repatriated. "We still trust Myanmar because it promises to take them back," he said.

With the start of the monsoon season, Mr Momen is worried about the safety of Rohingya refugees in Cox's Bazar. Last September, at least three Rohingya died there after extreme monsoon rains hit the refugee camps, causing lethal mudslides.

For this year, Bangladesh's prime minister Sheikh Hasina has started to prepare an island, known as Bhasan Char, and has provided a budget to build new campsites for refugees to move to for safety reasons.

WE WANT TO GO HOME

According Arakan Rohingya Society for Peace and Human Rights (ARSPH) data, over 10,000 people have been killed, 2000 have been raped and 75,000 houses have been burnt, with damages totalling over $679 million between October 2017 and July 2018. 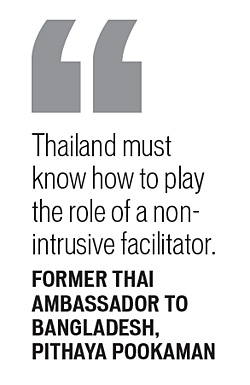 Such an atrocious crackdown has forced over a million Rohingya who lived in the northern Rakhine state to cross the border into neighbouring Bangladesh. Mohib Ullah, the chairman of ARSPH, is among a group of refugees who fled what he called ethnic cleansing. Since fleeing, he has lived safely in a refugee camp site in Cox's Bazar.

He told the Bangkok Post that although Rakhine is a place that holds painful memories, he and many refugees still want to go back. Despite the brutal crackdowns and an uncertain future, Mr Ullah feels that Myanmar is his home and that the Rohingya are part of Myanmar's society.

"We lived in the Rakhine area long before the British rule in 1824. But then the British colonised us, drafted their own new map and made us part of Myanmar. Nobody can erase our history," said Mr Ullah.

Although their homes were destroyed during the Myanmar government crackdown, these refugees are still staying hopeful that they will be able to return. They also keep evidence to verify their identities, such as their grandparents' cards showing their full citizenship, land ownership documents and family registration lists. Returning home is not enough for these refugees, who are also demanding that the government moves to restore their full citizenship.

In 1993, the border immigration forces withdrew their citizenship cards and gave them Temporary Registration Cards, calling them Bengali people. The Rohingya people were banned from owning property, getting an education, applying for civil service positions and travelling freely.

Sawdah Ullah, another refugee, said the Rohingya people want to return to Myanmar with dignity. He said the international community can help the dreams of Rohingya come true by exerting more pressure on the Myanmar government to make sure that they live safely and have their civil rights fully restored.

"What we want is not humanitarian aid. We just want to go home."

Will Baldwin shooting lead to criminal charges or lawsuits?

Kiwi boffins aim to clear the air on livestock emissions