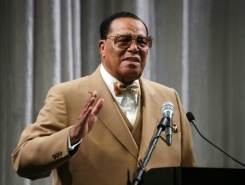 "We've always banned individuals or organizations that promote or engage in violence and hate, regardless of ideology," Facebook said in a statement.

The most prominent to be banned were Farrakhan, head of the Nation of Islam, accused of being anti-Semitic and black supremacist; and Jones, the far-right conspiracy theorist best known for calling the 9/11 attacks an inside job and describing the Sandy Hook school massacre as a hoax. Jones's organization Infowars was also banned by Facebook.

Facebook announced the bans on the grounds they violated policies against dangerous individuals and organizations.

"Individuals and organizations who spread hate, or attack or call for the exclusion of others on the basis of who they are, have no place on Facebook," a spokeswoman for Facebook said.

Such bans typically include prohibiting others at the social network from using the platform to post praise or support from those no longer welcomed.

"The majority of the newly banned figures -- Yiannopoulos, Loomer, Watson, Jones, and Nehlen -- owed their influence to the massive reach they were allowed to cultivate through Facebook and Instagram."

Banning the accounts should help limit the spread of radical and often violent far-right ideology, according to Lopez.