Cambodian rivals use noodle ploy to get message across
World

Cambodian rivals use noodle ploy to get message across

PHNOM PENH: The bitter decades-long rivalry between Hun Sen, Cambodia's strongman leader, and Sam Rainsy, his self-exiled chief political rival and critic, has sometimes played out in deadly violence. But on Sunday, soup rather than blood was likely to be spilled.

The two titans of Cambodian politics, who normally agree over nothing, made stunningly similar calls to their followers this past week. On Sunday, they said, all Cambodians should gather with their neighbours and sit down for a meal of num banh chok, a popular Cambodian rice noodle soup usually consumed at breakfast.

From his prime minister's perch of unchallenged authority, Hun Sen promoted eating “the Khmer (Cambodian) noodles of unity and solidarity.” Sam Rainsy, co-founder of the country's only credible but now disbanded political party, called for “eating Khmer noodles for the sake of friendship in the framework of the entire, giant Cambodian family.”

Both encouraged sharing with folks from the other side of the political fence.

It sounds like a utopian scenario, but its roots are in hard-nosed politics.

The Cambodia National Rescue Party was dissolved by the Supreme Court in November 2017, in what was widely seen as a political manoeuvre to ensure victory by Hun Sen's Cambodian People's Party in the 2018 general election. The 118 opposition lawmakers were kicked out of Parliament and banned from contesting the polls and any other political activity for five years.

Former party members were left at loose ends. Many of its leaders fled the country, fearing arrest. Even those in local political positions were booted from their jobs.

Sin Rozeth had been an admired young CNRP commune chief in the northwestern province of Battambang. Forced out of politics, she opened a shop selling Cambodian noodles. Her old colleagues would drop by for a meal and chat about politics, and she and others would post their thoughts on Facebook.

Their comments about Sam Rainsy drew the attention of authorities. A court called in Sin Rozeth and about three dozen colleagues for questioning, citing their noodle soup meals as political gatherings in violation of the Supreme Court ban on political activity.

According to Human Rights Watch, authorities this year have issued at least 147 arbitrary court and police summonses against members or supporters of the Cambodia National Rescue Party. “Summons seen by Human Rights Watch lacked legal specifics, containing only vague references to allegations that the person summoned may have violated the Supreme Court ruling that dissolved the CNRP in November 2017,” the rights group said.

Soon, word spread that the former CNRP leaders wanted their party members nationwide to gather where they could on Sunday and eat the kind of noodles Sin Rozeth sold in her shop -- a novel act of political solidarity. 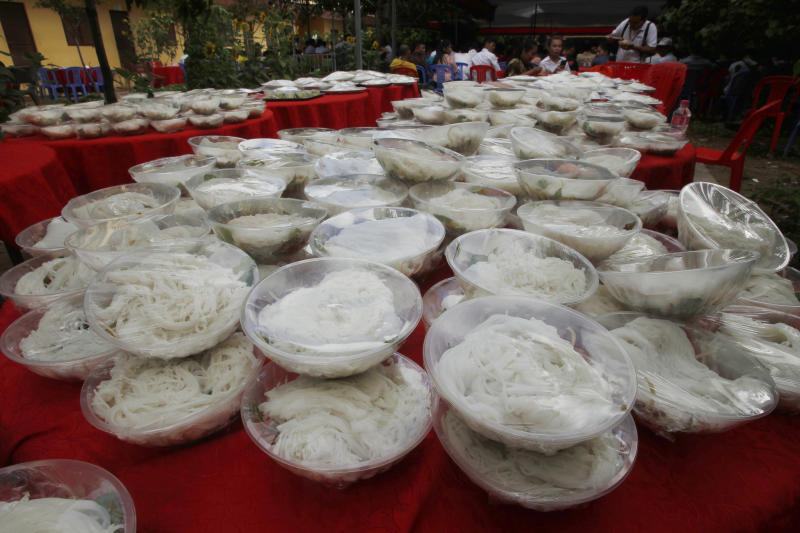 Bowls of noodle are placed at a Buddhist pagoda for garment workers at outside Phnom Penh, Cambodia, on Sunday.

Hun Sen, known for his prowess in chess, quickly countered, sending word down to his party members that they should also gather on Sunday to eat noodle soup: “Please don't forget to eat Khmer noodles together. These are the Khmer noodles of unity and solidarity, not destructive noodles.” Hun Sen also suggested that the activity could kick off a campaign to promote Cambodian food and culture.

Effectively co-opted, Sam Rainsy, interviewed by The Associated Press in Paris, said his party had forced Hun Sen's hand with its bid to make a show of strength.

“Since people eat noodles all over the country, Hun Sen may first accuse them of being opposition supporters, but after seeing such a tide, so many people joining the noodle parties, Hun Sen said no, we cannot stop these noodle parties. If you can't beat them, join them,” Sam Rainsy said.

At a Buddhist temple in Phnom Pehn, Hun Sen's party set up tables on a stage for about 300 people. As they eagerly slurped the breakfast noodle soup and chatted with one another, some confessed they were unaware of or didn't care for the event's political undertones. Others quoted the prime minister's message of solidarity and national unity.

“I have been eating the Khmer noodles since I was young,” said Pov Tha, 43. “I did not hear their appeals but I saw many people eating for free and then I joined them.”

Sam Rainsy speculated that the action might improve the political atmosphere.

However, Hun Sen denied any such prospect.

“Please don't take what I said to be analysed outside the intention of eating Khmer noodles, as some people think that it is a step toward negotiations (with the CNRP),” Hun Sen said at a graduation ceremony Thursday in Phnom Penh, Cambodia's capital, according to a report in the English-language Phnom Penh Post.

“Don't be confused,” he said. “I'm talking purely about Khmer noodles and solidarity, about national unity through the eating of Khmer noodles on June 9.”

A balloon clouds US view on Xi's China