"All the eight rai I planted were all heavily infested," said the 42-year-old from his farm in Ban Nong Tor town in Pak Chong district, 180km northeast of the capital Bangkok.

"The worm ate the whole field in three days, leaving so much damage that it wasn't worth saving."

Fall armyworm, a caterpillar that got the name because it invades croplands in droves, much like an army, has rapidly spread across Asia since it was detected in southern India late last year. Fields in Bangladesh, Myanmar, Vietnam, Indonesia and Taiwan have fallen victim. In Thailand, it has badly affected the country's corn crop, much of which is sold to the animal feed industry.

In recent months, the pest has also been found in 18 of China's 33 provinces and regions and is now threatening to spread across the key corn region in the northeast. China is the world's second biggest corn consumer and producer.

"It is a major issue for crops. It could pose a food security threat," said Phin Ziebell, an agribusiness economist at National Australia Bank. "Management cost is an issue for small farmers."

Marjon Fredrix, an agricultural officer at the UN Food and Agriculture Organisation (FAO), said some countries have reported damage to crops hit by the pest at 1.2% to about 10%, while others had put the figure at 20% to 40%.

"Once the fall armyworm has arrived, it can't be eradicated, and farmers will have to manage it," Mr Fredrix said.

A dip in the production of corn, largely used in Asia to feed animals, could force hog, poultry and cattle growers to rely on expensive imports and dent incomes of millions of small farmers.

The fall armyworm invasion comes against the backdrop of planting delays in the United States which lifted benchmark Chicago corn futures by nearly a fifth last month.

Asia's millions of smallholder farmers — many with less than an acre of land — are likely to take a bigger hit from the pest than larger growers given their reluctance to adopt new technologies to combat production threats.

"There is an inertia about new technologies," said Paul Voutier, Singapore-based director at Grow Asia, a World Bank funded organisation that works with small farmers and other stakeholders to improve productivity. 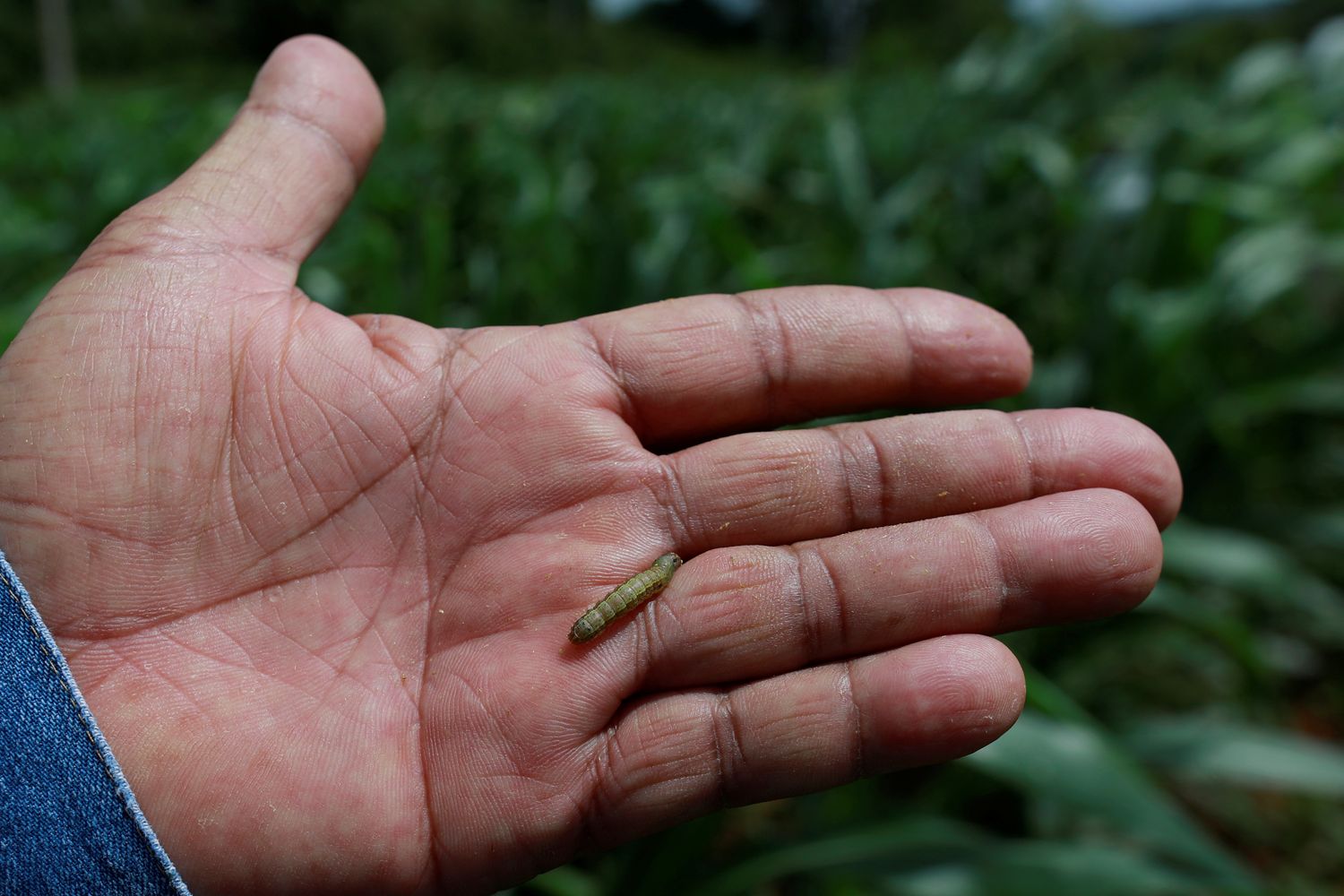 A farmer shows a Fall Army Worm in a maize field at Pak Chong district, Nakhon Ratchasima province, on Wednesday.

"And the treatment for fall armyworm has the awful combination of being both costly and difficult," he said, noting the pest's tendency to burrow low into the stem of the crop made it hard to combat with traditional pesticide sprays.

Asia is the world's biggest consumer and importer of corn. The region accounts for 34% of global corn imports and nearly 36% of world corn consumption, according to the US Department of Agriculture data.

The pest, which has been known for almost 200 years in the Americas, was first reported in Africa in 2016 and has since spread across the entire continent, according to FAO.

The armyworm has been detected in more than 50 of Thailand's 76 provinces, and is concentrated in six western provinces with large maize areas. It has a preference for corn, but can attack 80 crops, including rice and sugarcane.

The pest thrives in tropical and sub-tropical climates. Its life cycle is 24 days to 40 days, and so two or three generations of it can feed off a single crop during a growing season before moving on.

"Fall armyworm attacks the corn crop in all stages, right from the germination of seeds and early establishment of the crop, which is the most vulnerable stage, till the harvesting stage," said Prasanta Patra, who heads the corn and row crops market in Asia for global agrichemicals firm Corteva.

"As the fall armyworm larva prefers to stay in the central part of the young corn plant, a very specific application technique needs to be applied to ensure that the insect comes in contact with insecticide."

China has seen corn and sugarcane crops damaged by the pest, according to a government official at one of the provinces hit by armyworm.

"It is very challenging. Corn farmers don't use much pesticide usually as corn is considered easier to grow and manage, compared with other crops," said a manager at a pest-trapping equipment producer that works with the Chinese government on fighting the armyworm.

The invasion of fall armyworm has hit China at a time the world's most populous nation is battling African swine fever which has resulted in culling of millions of pigs.

Demand for animal feed in China will therefore fall, and a drop in the production of corn may not immediately impact local prices, people in the industry said.