A barricade set by protesters at the entrance to a campus is pictured at the Chinese University in Hong Kong, China, on Wednesday. (Reuters photo)

A territory-wide obstruction protest has caused traffic chaos and school suspensions in Hong Kong for the third consecutive day Wednesday.

Protesters set up makeshift roadblocks and scattered debris on major thoroughfares in various districts in the early hours, seriously affecting rush-hour road traffic and forcing the cancellation of bus services.

Two major subway lines were closed and other services were partly suspended in the morning. A carriage sustaining extensive damages was stopped at the University Station, which leads to the Chinese University where a serious clash between police and protesters happened late Tuesday.

Protesters clashed with police for hours on a road entrance to the university. They threw bricks and Molotov cocktails at police, who fired tear gas and rubber bullets in return. As many as 1,000 tear gas canisters were fired and some 60 protesters were injured, local media reported.

In the downtown business district of Central, protesters staged a lunchtime demonstration, blocking off traffic on the major roads there. Some of the crowd rallied at the building where the Hong Kong Stock Exchange is located. Police arrived and detained at least three people, including a man who was seen bleeding from the head.

Police left after reopening the roads, but they were blocked by protesters again.

Although government leader Carrie Lam said Tuesday schools would not be suspended so as not to give in to the protesters, the Education Bureau said Wednesday parents should decide on their own whether to send their children to school. It later announced that all school classes will be suspended Thursday.

Wednesday night horseracing was also suspended due to safety concerns.

"We have witnessed violent damage to rail carriages, a petrol bomb attack on a moving rail car, arson and road blockages at some 30 areas (Tuesday)," Chief Secretary for Administration Matthew Cheung told reporters. "The government is highly concerned about the current situation and we urge the citizens to stay away from, reject and cut ties with violence."

"Whatever your beliefs are, whatever you are pursuing, resorting to illegal acts like violence, destruction or random attacks on people is not the way and is doomed to fail. The government stresses again that we are dedicated, confident and capable of stopping violence and we fully support the police force in strictly enforcing the law," he said.

The latest (all times local):

A group of about 50 people, some black-clad hardcore protestors wearing masks and others seemingly passers-by, some with bicycles, screamed abuse at a phalanx of Hong Kong police in full riot gear as they advanced across the bridge over the Shing Mun river close to the city centre of Sha Tin in the New Territories. After about 15 minutes, the police raised the black flag warning of tear gas, and most of the protestors dispersed shortly before it was fired, still yelling obscenities. Police then advanced across another bridge, hoping to hem the protestors in. 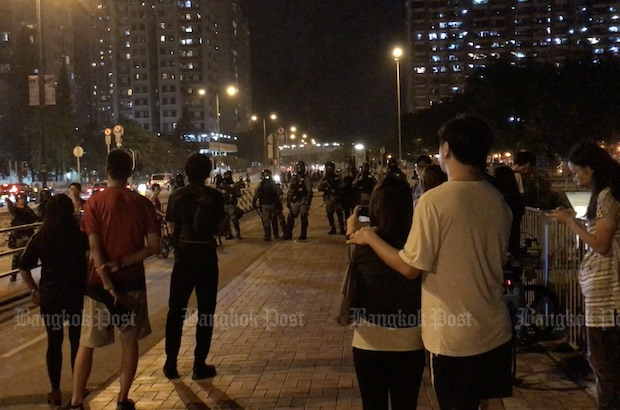 Riot police confront an assortment of protestors and passers-by yelling abuse on a bridge in Sha Tin, Hong Kong on Thursday night. (Screen capture from video by Dave Kendall)

In Central, Hong Kong’s business and retail centre, riot police moved in on roads to clear out protesters in the early evening. Several people were seen being subdued by the police, while others reported pepper spray being used. Officers with helmets, face masks, batons and shields were seen guarding the streets at around 8 p.m. Very few pedestrians were seen in the normally busy area.

The “unpredictability of the situation in Hong Kong” also led to the Association of Asia Pacific Airlines and Cathay Pacific Airways Ltd. to cancel the 63rd Assembly of Presidents event scheduled to take place next week in the city, the companies said in a joint statement.

Rumours are circulating in the online messaging apps used by protestors that Hong Kong police are planning some kind of operation at the Sha Tin campus of Hong Kong Chinese University at 9pm tonight. The campus was the scene of a protracted battle between police and protestors on Tuesday night. There are also unconfirmed rumours that protestors may attack Hong Kong's power grid tonight in a bid to cause blackouts.

Taiwan's President Tsai Ing-wen is calling on Hong Kong's government to cease “acts of repression,” saying such acts are threatening freedom and the rule of law.

Commenting on the police assault on students at the Chinese University of Hong Kong, Tsai tweeted that police in Taiwan used similar tactics during the years of martial law, which was lifted in 1987.

She wrote. “Our dark past, which we have worked so hard to put behind us, has become the present reality for Hong Kong.”

She says, “I solemnly call on the Hong Kong government to stop these acts of repression before it is too late.”

Hong Kong police have defended their actions, saying they were acting in self-defense and asserting that campuses are not a refuge for lawbreakers.

Tsai called on all democratic nations to “stand with Hong Kong” and express concern over developments there.

She says, “Right now, authoritarianism is eroding freedom and the rule of law in Hong Kong.”

A Danish technical university is urging its 36 students in Hong Kong to pack up and return to Denmark.

Anders Overgaard Bjarklev, head of the Technical University of Denmark, says the decision came after some of the riots have moved to the campuses and “some of our students have been forced to move from their dormitories because they put on fire.”

Overgaard Bjarklev told Danish broadcaster DR Wednesday that DTU, as the university is known, took the decision late Tuesday for the students “to come to Denmark in an orderly fashion.”

DTU would also solve “any academic challenges associated with the interrupted course.”

Hong Kong police say they raided a university campus to make arrests because they strongly suspected it was being used to make gasoline bombs to attack police.

Police have been criticised for entering the Chinese University of Hong Kong on Tuesday, which some called an attack on higher education and sign of deteriorating relations between police and the public.

Police spokesman Tse Chun-chung said at a briefing Wednesday that the action was taken after riot police guarding a pedestrian bridge next to the campus came under repeated attack.

He questioned how protesters and students could obtain hundreds of gasoline bombs and deploy them quickly in the area, saying it raised strong suspicions that they had been assembled there.

“Nowhere in Hong Kong is lawless land,” Tse said, adding that police would pursue lawbreakers wherever they seek refuge. “No excuse, no political motives can justify or glorify this madness.”

Police said across Hong Kong on Tuesday, they fired 1,567 tear gas canisters, 1,312 rubber bullets and 380 beanbag rounds. A total of 142 people were arrested and 10 people were taken to hospitals with injuries.

China's foreign ministry has again warned the United States not to interfere with Hong Kong's affairs, saying the city is part of China.

Ministry spokesman Geng Shuang said at a daily briefing Wednesday that members of the US Senate should stop trying to promote bills on human rights or democracy in Hong Kong.

“I want to reiterate that Hong Kong is China's Hong Kong. Hong Kong affairs are purely China's internal affairs and cannot be interfered by any external forces,” he said.

Mainland Chinese students fleeing violent protests in Hong Kong are taking advantage of a program that offers them a week of free accommodation in hotels and hostels in the neighbouring city of Shenzhen.

Chinese media reported that one hostel had received more than 80 applications for rooms as of 10am Wednesday.

The “Grads Home” service was established in 2013 to provide short-term accommodations to recent graduates looking for jobs in the tech hub.

The Beijing Evening News reported that mainland students have said in online posts that protesters have broken into their dormitories, spray-painted insults on walls and banged on their doors.

Hong Kong police said Wednesday that they had helped a group of mainland students leave their campus after it was barricaded by demonstrators.

Hong Kong's Education Bureau has suspended classes at primary and secondary schools because of violence and described the situation in the city as "chilling''.

The bureau also appealed for "school children to stay at home, not to hang around in the streets, to stay away from danger, and not to participate in illegal activities.''

Many of the masked people taking part in the protests are thought to be high school and university students.

The bureau said schools would still be open while classes were suspended Wednesday and Thursday and teachers should show up at work in case some parents sent their children to classes.

It added that schools should ensure the safety of children who did attend.

Police have increased security around Hong Kong and its university campuses as they brace for more violence after sharp clashes overnight with anti-government protesters.

Many subway and rail stations were closed Wednesday after the protesters blocked commutes and vandalised trains. Classes were suspended at schools and universities.

Police and protesters battled on multiple fronts overnight at the Chinese University of Hong Kong. Gasoline bombs and fires lit the night-time scene, and the situation remained tense in the morning.

A police official said protesters were carrying out insane acts and Hong Kong was on the brink of a total breakdown after more than five months of protests.