The comet 2I Borisov as captured by the Gemini North telescope in Hawaii, in November. The comet is the second known interstellar object to enter our solar system, passing through at 177,000 kilometres per hour. (Photo: NSF/AURA/Gemini Observatory/NYT)

NEW YORK: It came out of the northern sky, a frozen breath of gas and dust from the genesis of some distant star, launched across the galaxy by the gravitational maelstroms that accompany the birth of worlds.

It wandered in the deep freeze of interstellar space for 100 million years or so, a locked vault of cosmo-chemical history. Then, in early 2019, this ice cube began falling into our own solar system. Feeble heat from the sun, still distant, loosened carbon monoxide from its surface into a faint, glowing fog; the orphan ice cube became a new comet.

Six months later, Gennady Borisov, a Crimean astronomer, saw it drifting in front of the constellation Cancer and sounded the alarm.

On Sunday, the comet that now bears his name,  2I Borisov, made a wide turn around the sun and began heading back out of the solar system. As it departs, it will steadily brighten and grow in size as sunlight continues to shake off the dust from a long, cold sleep. On Dec 28, the comet will pass 180 million miles from Earth, its closest approach to our planet.

This procession is being greeted with hungry eyes by a species only just knocking on the door of interstellar exploration and eager for news from out there.

Humanity’s most distant artifacts, the two Voyager spacecraft, recently punched through the magnetic bubble that closes off the solar system from the rest of the galaxy. Meanwhile, a band of scientists and engineers are developing an extravagantly ambitious plan, called Breakthrough Starshot, to launch a fleet of butterfly-size probes all the way to Alpha Centauri, the nearest star system to our own.

But what’s Out There is already In Here. Nature, generous as ever, has been slinging “Scientific CARE packages,” as Gregory Laughlin, a Yale astronomer, put it, toward us in the form of interstellar comets.

Two years ago, astronomers discovered an interstellar rock called Oumuamua cruising through the solar system. It caused a sensation, exciting talk of alien probes until further study concluded that it was actually a comet with no tail — albeit a comet from reaches unknown. Now 2I Borisov has astronomers tingling again, ready to follow its outbound run with their telescopes.

“I think the sense of excitement stems in part from the timing of these discoveries,” Laughlin said. Oumuamua and Borisov, he added, augur well for a new telescope the National Science Foundation is building in Chile called the Large Synoptic Survey Telescope, which will sweep the entire sky every few days, producing in effect a movie of the universe.

That telescope will be superbly positioned to find more interloper comets, perhaps even in time to send probes to greet them with Deep Impact-style missions. “The situation is reminiscent of when the first exoplanets were detected,” Laughlin said. 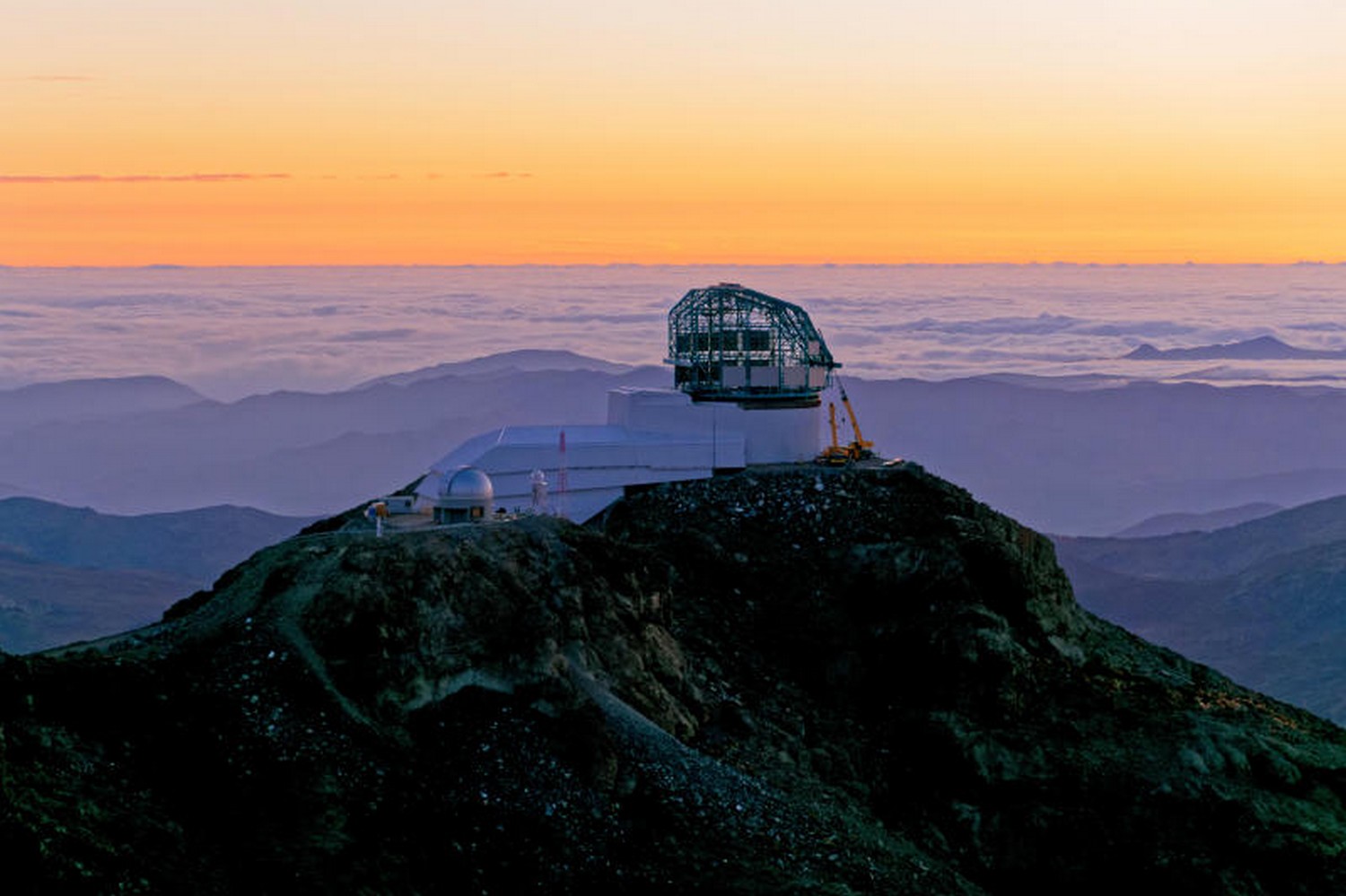 Thus far, the two examples of interstellar comets that humans have observed could not be more different. Oumuamua was mistaken for an asteroid at first because it had no cometary cloud of gas and dust around it, at least that could be seen. But as it was traveling out of sight, small perturbations in its motion suggested that in fact the rock was actually a comet, being pushed around by jets of gas shooting from its surface.

Estimates of the object’s shape -  long and cigarlike - spurred speculation that it could be an alien probe or even a solar sail. Recent analysis by Sergey Mashchenko, an astrophysicist at McMaster University in Ontario, has concluded that Oumuamua was less a rod than a thin slab rocking back and forth as sunlight and radiation wore it away.

“It was vanishing as it went away, like a

Borisov, in contrast, is thriving, sprouting a typically bushy, radiant tail. As a comet, it would be utterly ordinary if not for its origin. “Nothing about Borisov is weird,” Laughlin said. “With Oumuamua, everything was weird.”

Borisov looked like a comet from the start, enveloped in a cloud of gas, which is what enabled Gennady Borisov to recognize it so quickly. And everything the visitor has done since then has suggested that at least some comets out there are more or less like our neighbourhood comets.

Borisov’s comet underwent an astronomical rite of passage of sorts in October, when the Hubble Space Telescope got a good look at it: a white knuckle at the head of a bluish fan of light.

Subsequent observations by telescopes on Earth have confirmed the presence of alien water and carbon monoxide as well as a growing list of chemicals from another part of the universe. As of Nov 24, the comet’s tail had grown to 160,000 kilometres long. The comet’s nucleus is only about 1.6km across.

Early in November, the Gemini observatory spotted the wanderer passing about 1 billion light-years in front of a spiral galaxy “romantically known” as 2dFgrS TGN363Z174, said Travis Rector, an astronomer from the University of Alaska Anchorage who was involved in taking the photograph. As if to tease us humans with a reminder of places unknown and unvisitable, the backdrop to the portrait is speckled with faint smudges of even more distant galaxies and stars.

When December began, 2I Borisov was drifting through the constellation Crater. Its brightness in astronomical terms was magnitude 16, far too faint for the naked eye or even binoculars, but accessible to a modest telescope and a CCD camera. (You can track it in real time at SkyLive.)

The comet is expected reach a peak brightness of about magnitude 15 around Dec 20, plus or minus a week, according Quanzhi Ye, an astronomer at the University of Maryland and another in the network of observers following the comet.

The comet came from the general direction of Cassiopeia and will exit the solar system through the southern constellation Telescopium, Ye said.

But this is only the beginning of comet-tracking season, he added. Astronomers will be following Borisov through at least the end of next year. Anything could happen on this watch. As comets approach the sun, geysers of vaporized ice, gas and dust can spring forth. Subsurface gas can heat up and explode, ejecting huge plumes of dust, which would make the comet much brighter and more visible.

“Solar system comets often (but not always) display outbursts near perihelion,” Laughlin said in a recent email. “But so far Borisov has been ‘boring’ in this regard.”

One of the astronomers waiting for action is Cheng-Han Hsieh, a colleague of Laughlin at Yale, who has been monitoring the comet daily with a worldwide network of robotic telescopes called the Las Cumbres Observatory, which has its headquarters in Goleta, California. The network includes a set of radio antennas, at Green Bank Observatory, the Submillimeter Array on Mauna Kea in Hawaii and the ALMA array in Chile, standing by for an outburst.

Radio observations might be particularly revealing, Hsieh said. They could shed light on an age-old issue of whether this comet, as it tracks through our neighborhood, is shedding more than just dust and ice - including, for instance, complex organic molecules that optimistic astrobiologists call “prebiotic.”

The data could also reveal the signatures of the different isotopes of the atoms locked in Borisov’s ice, which in turn might say something about the origin of the comet. What kind of star formed nearby? Was a supernova involved? With luck, we might learn which of those reddish smudges in the cosmic background our visitor once called home.

A slight majority of people believe their opposition will produce telling blows in its planned no-confidence debate against the government, according to the result of an opinion survey by the National Institute for Development Administration, or Nida Poll.

PARIS: French carmaker PSA on Saturday said it would repatriate expat staff from Wuhan as fears grew that more cases of coronavirus would be found in France.