BORACAY, Philippines: As mobile internet service -- but not electricity -- returned to Boracay, the extent of the destruction to the island cut off by typhoon Phanfone on Christmas Day filtered out to the wider world.

The typhoon -- known in the Philippines as Ursula -- killed at least 47 people, and damaged or destroyed more than 378,000 houses across the Philippines, the Philippine National Disaster Risk Reduction and Management Council said on Monday.

Boracay, one of the country’s premier tourist destinations, was hit hard by the storm.

Arriving at Caticlan airport on Dec 26, there was no electricity, no phone service and no internet signal. The ferry port to the island was mobbed, with many travellers making the return trip after hoping to be able to use ATMs on the mainland, to no avail. 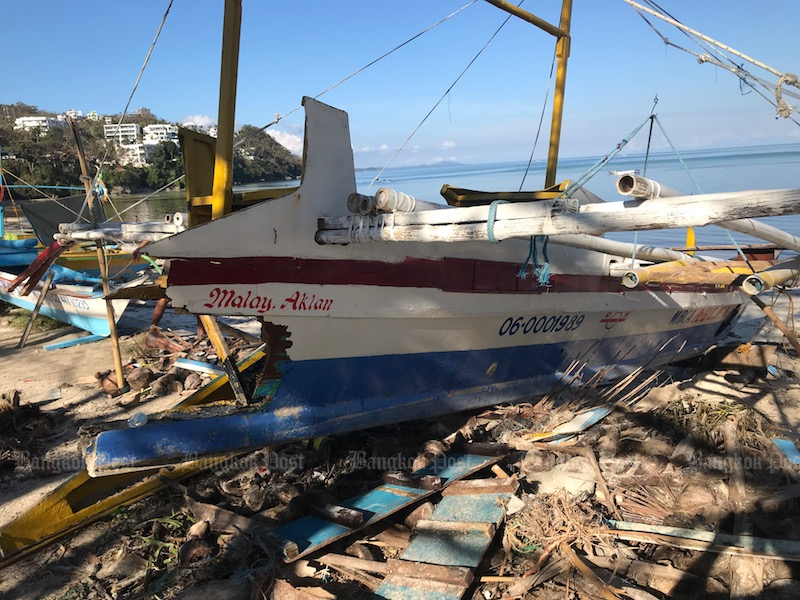 A damaged boat is seen on Bulabog Beach in the wake of Typhoon Phanfone, on Boracay, Aklan, Philippines, on Dec 26, 2019. (Photo: Dave Kendall)

“Nope, nothing works here either,” said a Filipino US Army veteran who wished to remain anonymous. Waiting for the ferry back to Boracay, he showed a video of the typhoon howling in at 9am on Christmas Day. “A lot of wind, a lot of rain, trees falling everywhere.”

He said he had been wounded by an improvised explosive device in Afghanistan, and suffered from PTSD along with physical disabilities that had yet to completely heal. “I’ve been through a lot,” he said. “But this was pretty scary.” 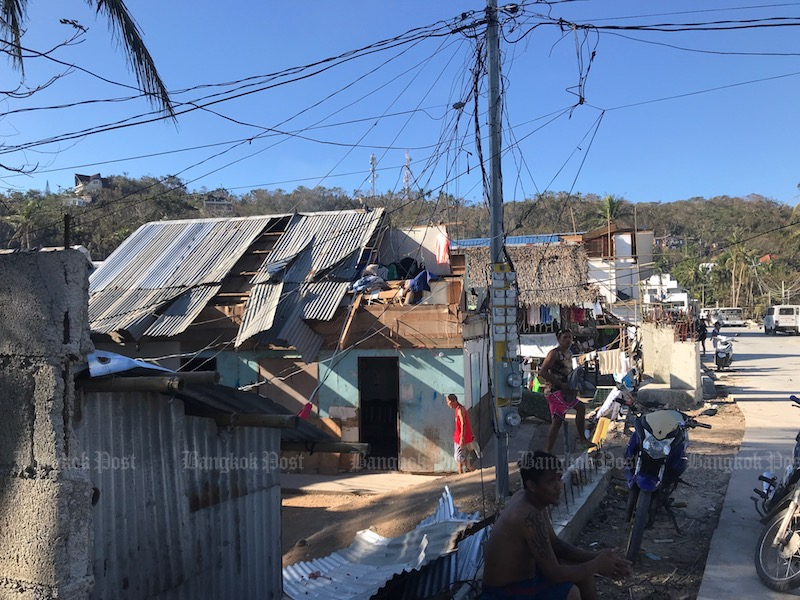 Damaged buildings are seen next to Bulabog Beach in the wake of Typhoon Phanfone, on Boracay, Aklan, Philippines, on Dec 26, 2019. (Photo: Dave Kendall)

After night fell, the island was not completely dark. Because blackouts in the region are not uncommon, most of the larger and many medium-sized businesses have their own generators.

But a trip around the island the following day revealed scenes of devastation. The area around the road up to Mt Luho looked like it had been carpet-bombed.

The concrete structures were mostly intact, but the wooden houses were in ruins, the sheets of corrugated iron that served as roofs nestled among piles of downed tree branches.

In some areas, half of the trees had been toppled, along with many electricity poles, with trailing power cables and debris leaving scant room for vehicles to thread their way through. (continues below) 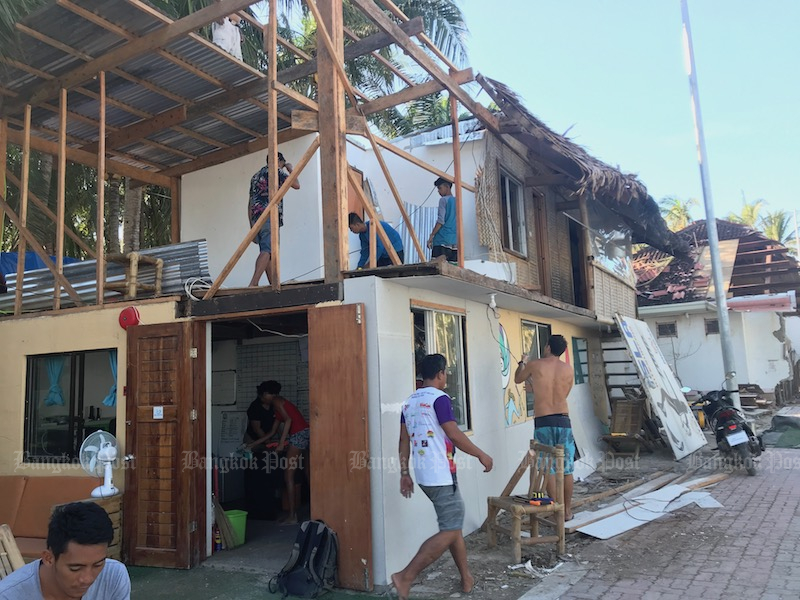 Workers repair the building housing Isla Kitesurfing next to Bulabog Beach in the wake of Typhoon Phanfone, on Boracay, Aklan, Philippines, on Dec 26, 2019. (Photo: Dave Kendall)

About 10 young Filipinos were swarming over the wreckage of Isla Kitesurfing on Bulabog Beach. “The typhoon took the whole front of the building, and the roof,” said the owner, who did not want to give his name. “There’s not much left.”

Asked whether this was the worst typhoon he had experienced, he shrugged. “Typhoon Duterte was worse,” he joked, referring to the Filipino president’s closure of the entire island in 2018 for rehabilitation. “But this was bad.”

“This was the worst experience of my life” said Leya, a freelance massage therapist looking for customers near Station 3 on White Beach. “I was so afraid. A tree fell on the (outside) toilet. If someone was in there, they would be dead. My two children were crying, so I was crying too. Now we sleep under the stars because the roof is gone.”

Leya was also worried because the front door to her rented house was damaged, and could not be locked. Because no ATMs were working, tourists had little money to spend – meaning a collapse in income for thousands of locals. She feared some might turn to crime. (continues below) 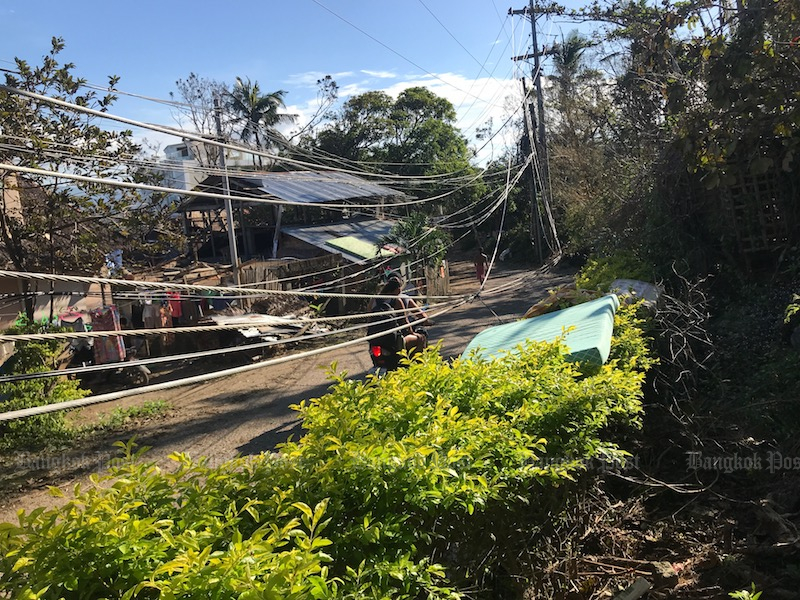 A mattress is seen laid out to dry next to trailing power cables on the Boracay Mount Luho Road in the wake of Typhoon Phanfone, on Boracay, Aklan, Philippines, on Dec 26. (Photo: Dave Kendall)

On Saturday Jill Yvette Alipongan, 26, returned to the island for the second time in three days - this time bringing a generator from her home town of Roxas City, six hours away by bus.

It took six people to lift the bulky equipment into and out of the van and the ferry, she said, but she had no choice -- her family’s business supplies hotels on the island with frozen meat and other goods, and that meat was beginning to thaw.

“I am so hot and so tired and I haven’t slept in two days,” she said. “But many people here have lost their homes. This is life in the Philippines.” 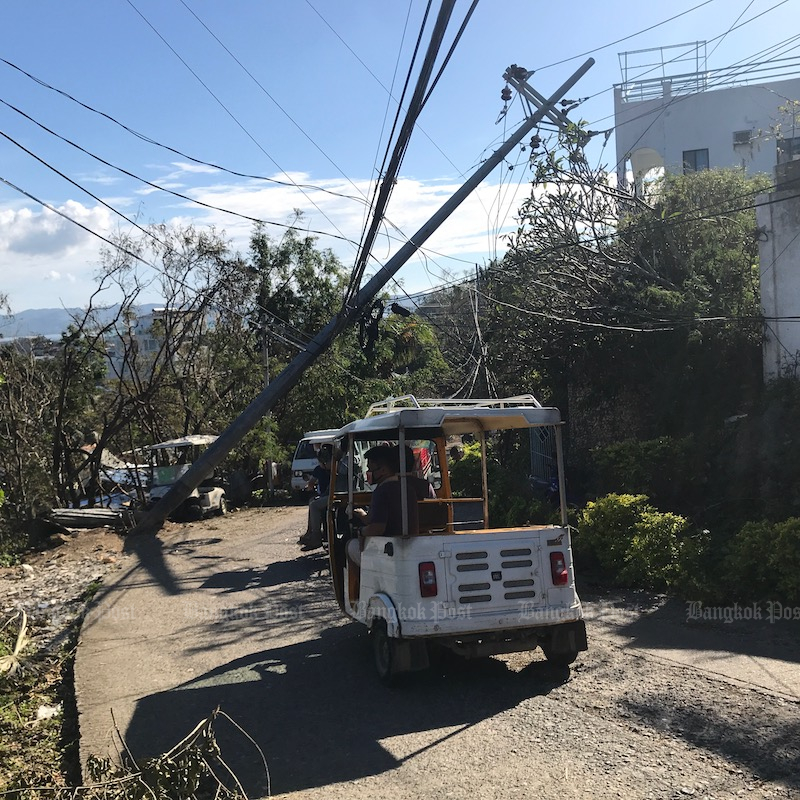 A broken power pole is seen on the Boracay Mount Luho Road in the wake of Typhoon Phanfone, on Boracay, Aklan, Philippines, on Dec 26, 2019. (Photo: Dave Kendall)