The number of South Korean men on paternity leave hit an all-time high last year, an encouraging sign for a country battling one of the world’s lowest birthrates.

Some 22,297 men in the corporate sector went on paternity leave in 2019, up 26.2% from a year earlier, according to the Ministry of Employment and Labour on Wednesday, according to Pulse.

This is the first time that the male tally has topped 20,000. Those who were not registered for employment insurance, such as public servants and teachers, were excluded from the study.

Fathers now account for 21.2% of all parental leave, also the first time for the share to pass a 20% mark.

Paternity leave was, however, more prevalent in big firms. Employees at companies with a staff of more than 300 made up 56.1% of all paternity leave applicants. But businesses with less than 10 employees also reported a 47.5% jump, suggesting that the trend is also catching on with smaller enterprises.

The total number of people taking parental leave rose 6% on year to 105,165, the ministry said.

More parents are also taking advantage of state policies that allow them to work shorter hours. Parents with kids under the age of eight can choose to work fewer hours, with the reduced pay partly subsidised by the government. The total number of applicants surged 48.2% to 5,660 last year. The policy was signed up by 742 males, a 34.9% bump up from the previous year. 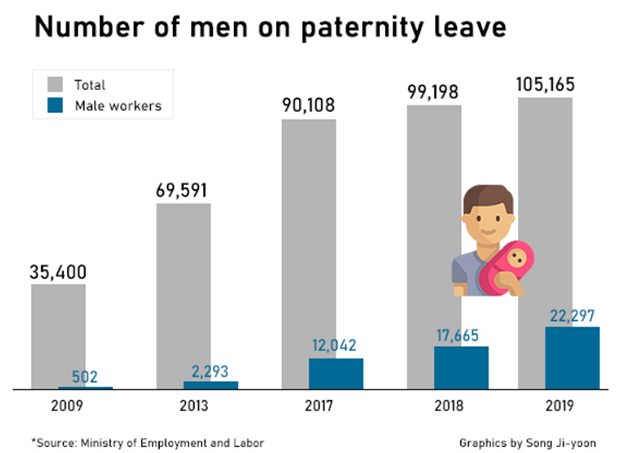 South Korea’s fertility rate, which measures the average number of children a woman will have in her lifetime, hit a record low of 0.98 in 2018, making it the only country in the world with a rate below 1. For comparison, Japan’s fertility rate was 1.42, Singapore’s 1.14 and Hong Kong’s 1.07. The OECD average was 1.68.

Alarmed by the accelerating slump in births, the government has been revising laws and allocating more money to bolster parental benefits. From February, mothers and fathers can both take parental leave at the same time. The same goes for the shorter work hour policy. Plans are also underway to raise the parental leave pay for single working parents in the first half of the year.