A medical worker wearing protective gear takes a rest as he waits for ambulances carrying patients infected with the Covid-19 coronavirus at an entrance of a hospital in Daegu on Sunday. South Korea has seen a rapid surge in infections since a cluster emerged from a religious sect in the southern city of Daegu last week.

SEOUL: The deadly coronavirus epidemic spread further outside China on Monday as a surge of infections in South Korea made it the biggest hotspot abroad, while authorities in Europe and the Middle East battled to curb outbreaks.

The number of fatalities in China also continued to soar, with 150 more confirmed deaths taking the official death toll to nearly 2,600.

Chinese authorities insist they are making progress in containing the virus, citing slowing infection rates thanks to unprecedented travel lockdowns and quarantines in or near the outbreak's epicentre.

But a rising number of new cases and deaths in other parts of the world have deepened fears about a potential pandemic, with South Korea, Italy and Iran emerging over the past week on the frontlines.

South Korea has seen a rapid surge in infections since a cluster emerged from a religious sect in the southern city of Daegu last week.

Another 161 infections and two more deaths were reported in South Korea on Monday, bringing the total cases to more than 700 people -- the most outside China.

South Korean President Moon Jae-in on Sunday raised the country's virus alert to the highest "red" level, to strengthen the government response to the spiralling outbreak.

The government has extended kindergarten and school holidays by one week nationwide and plans to enforce tighter two-week monitoring of arrivals from China.

In Italy, several Serie A football games were postponed, the Venice Carnival was cut short and some runway shows were cancelled at Milan Fashion Week as new cases erupted in the country.

Most cases are confined to the northern town of Codogno, about 70 kilometres (43 miles) southeast of Milan.

An elderly cancer patient became the third person known to be infected with the coronavirus to die in Italy, where more than 150 people have contracted the COVID-19 illness.

More than 50,000 people in about a dozen northern Italian towns have been told to stay home, and police set up checkpoints to enforce a blockade.

Italian Prime Minister Giuseppe Conte urged people "not to give in to panic and follow the advice of health authorities". (continues below) 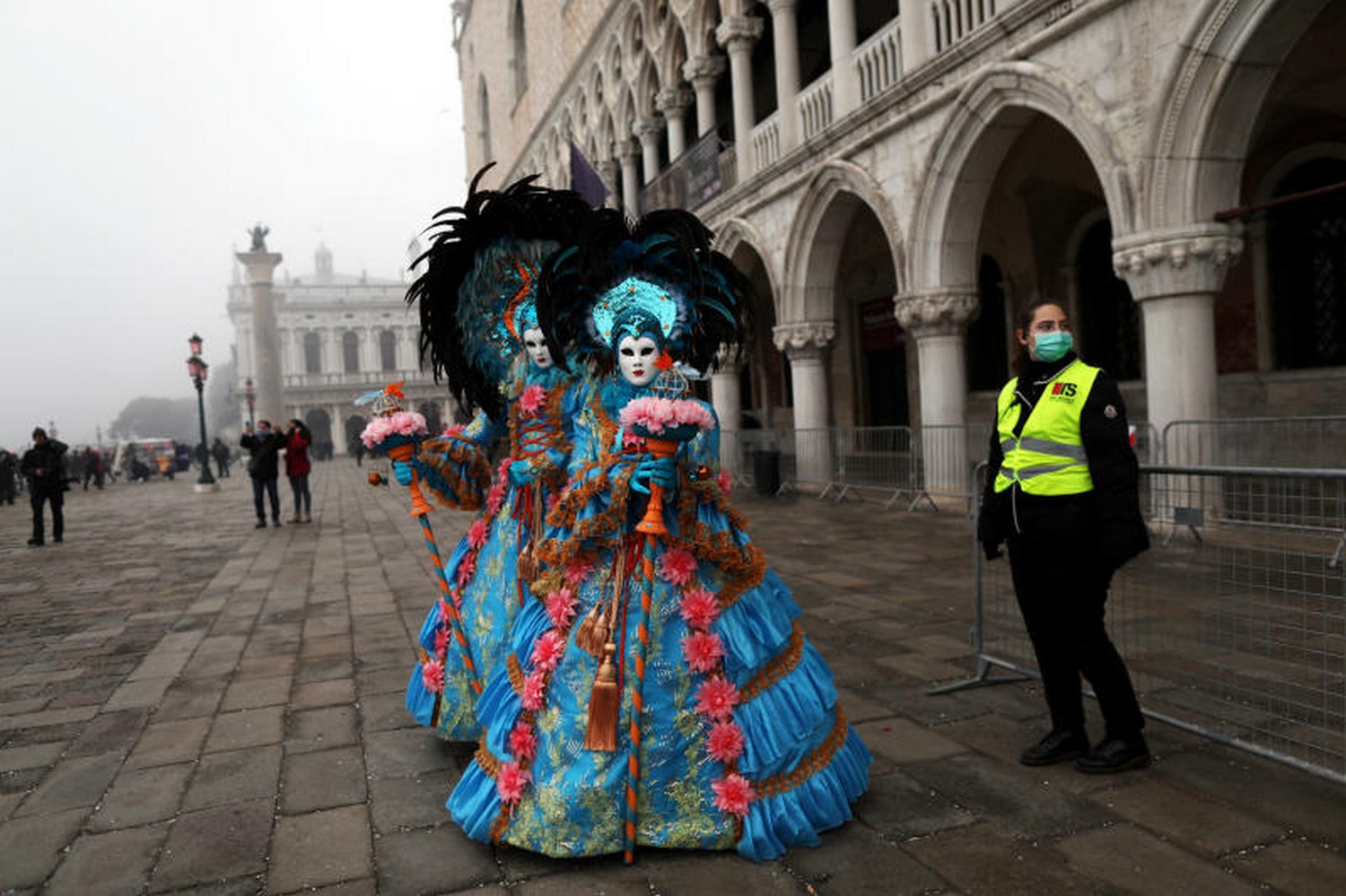 A policewoman wearing a protective mask stands next to carnival revellers in Venice on Sunday, where the last two days of the annual festival were cancelled, including Sunday night, because of an outbreak of coronavirus. (Photo: Reuters)

In Iran, authorities ordered the closure of schools, universities and cultural centres across 14 provinces following eight deaths -- the most outside East Asia.

The outbreak in the Islamic Republic surfaced on Wednesday last week and quickly grew to 43 confirmed infections, prompting neighbouring countries to close their borders.

In total outside China, nearly 30 people have been confirmed killed with more than 1,500 infections in at least two dozen countries.

In China, the confirmed death toll stood at 2,592 on Monday after 150 more people died of the virus.

The number of confirmed new cases fell compared with the previous day to 409, taking the country's total infections over 77,000.

The virus is taking an increasingly heavy toll on the global economy, with many factories in China closed or subdued due to quarantines, and global travel choked.

Stock markets in Asia fell on Monday following the surge in infections in South Korea and weekend developments across Europe and the Middle East.

"While the coronavirus is probably slowing in China, it is speeding up elsewhere," said Charles Gillams, at RJMG Asset Management.

The International Monetary Fund warned Sunday that the epidemic was putting a "fragile" global economic recovery at risk.

G20 financial chiefs also voiced concern about its ripple effects around the world.

Chinese President Xi Jinping acknowledged Sunday that it the virus had become the country's "largest public health emergency" since the founding of the People's Republic in 1949.

"This is a crisis for us and it is a big test," Xi said in comments reported by state television.

Officials are expected to decide Monday whether to postpone China's annual parliament meeting for the first time since the Cultural Revolution in the 1960s.