Vietnamese people who come back from China are seen inside a quarantine area at a military base in Lang Son province, Vietnam, on Feb 20. (Reuters photo)

HANOI: Vietnam has sent tens of thousands of people to quarantine camps as waves of overseas citizens return home to escape a coronavirus pandemic spreading in Europe and the United States.

Even though Vietnam is one of Southeast Asia's poorer nations, its efforts against the virus, praised at home, have ensured its tally of infections is lower than those of many neighbours.

By Thursday, those quarantined numbered 44,955, including nearly half in military-run centres, down about 15% from Monday's figure, official data showed, as many among the first influx to return home early in March were discharged.

"Those with symptoms are taken to hospital, and the rest are sent to quarantine camps, where they will share a room with 10 to 20 others on the same flight."

The official was one of several interviewed by Reuters who sought anonymity as they were not authorised to speak to media.

Vietnam has reported just 148 infections, its health ministry says, with no deaths. Its proven infection rate is lower than any regional nations except Myanmar and Laos, where testing has been limited.

The current phase of the battle against the virus is "decisive", Prime Minister Nguyen Xuan Phuc has said, in an effort government statements describe as the "spring general offensive of 2020".

Vietnam took a textbook approach in its early response strategy, based on its experience as the first country outside China to be hit by the Sars outbreak of 2003, said Todd Pollack, an infectious diseases specialist at Harvard Medical School.

"Quarantine of individuals who have contact with a case or are coming from a high-risk area is definitely a key strategy, especially since people infected seem to be infectious at the very start of symptoms," added Mr Pollack, who works with a Harvard initiative in Hanoi, Health Advancement in Vietnam (HAIVN).

Vietnam began its mass quarantine programme on March 16, when it began compulsory testing and quarantine measures for arrivals from virus-hit areas.

Singapore and Taiwan are among the other nations to have quarantined thousands of people, although most have been confined to their homes rather than camps. China also sends new arrivals to designated sites for compulsory quarantine.

Vietnam's aggressive contact tracing has occasionally led to the quarantine or self-isolation of hundreds of people because of just a few cases.

People have been cheered by tales on social media of tired soldiers offering help or sleeping in the forest to provide bed space for arrivals at military-run quarantine centres.

"Quarantine camp can't be like home," said Nguyen Ha My, a student who was sent to a barracks 160km outside Hanoi after she arrived from Hungary on Saturday.

"No place can be like home, but I feel safe here," My, who shares a room with several people, told Reuters. "The soldiers here are very caring. I was given the smallest things such as shampoo, shower gel, and even toilet paper."

My and others in quarantine said everyone practised social distancing, with those showing initial symptoms immediately moved elsewhere in the camp.

Nguyen Nhat Anh, who left Vietnam in February to study in Australia, is another person who returned home on Saturday.

"It's like a vacation, at quarantine camp," Anh told Reuters. "Free Wi-Fi, free meals, free face masks. Just a little heart attack if any of the roommates cough." 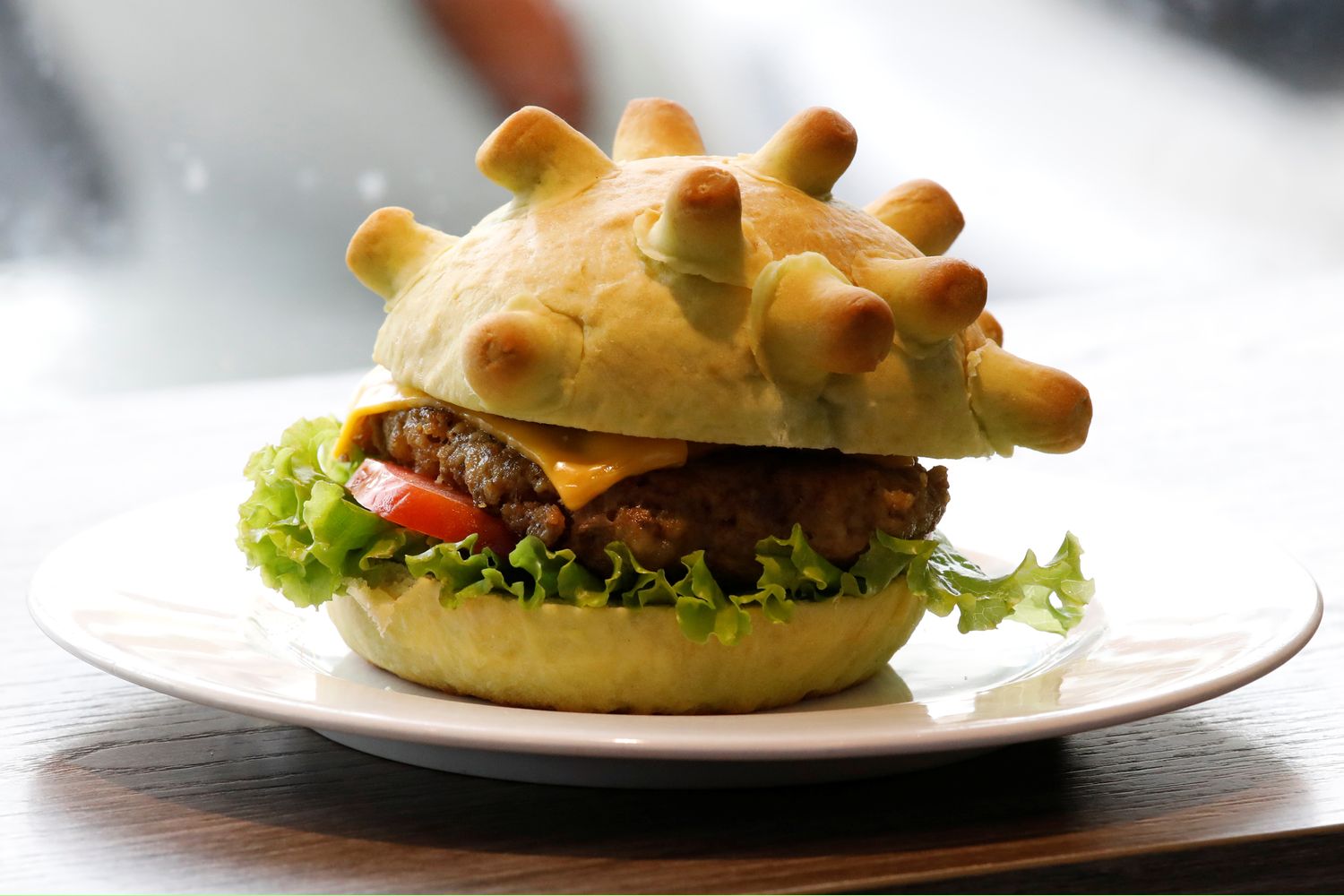 A burger shaped as coronavirus is seen at a restaurant in Hanoi on Wednesday. (Reuters photo)