Remember the drive-in movie theatre? They’re making a temporary comeback in Seoul as a way to enjoy movies while adhering to social distancing. (Reuters Photo)

TOKYO: A total of 58 people, including 26 people with disabilities, have been infected with the new coronavirus at a welfare facility in Chiba Prefecture, east of Tokyo, the local government said on Saturday.

The news added to concerns that Japan, which has had a relatively low number of Covid-19 cases so far, may need to step up its response to the pandemic further.

Prime Minister Shinzo Abe said on Saturday evening that there was no need to declare a state of emergency yet. But he warned citizens that the fight against the pandemic would be a long one.

The group infection occurred at the Hokuso Ikusei-en facility in the town of Tonosho, where people with disabilities engage in crafts, horticulture and other activities.

The 58 cases also include 32 who work at the facility, Chiba prefectural government officials said. The mass infections were confirmed in tests conducted after a female worker was found to be infected Friday.

“It is a grave situation,” Chiba Governor Kensaku Morita told a news conference.

The report came on a day when cases reported worldwide passed 607,000 with 28,000 dead and 132,000 recovered, according to the daily tally by US-based Johns Hopkins University. The United States became the first country to reach 100,000 infections and Spain reported a second consecutive day of record deaths as the pandemic shows no signs of abating. But Wuhan, the city where it all started, welcomed its first inbound passenger train after a two-month lockdown.

Tokyo is halfway through a critical weekend that could determine whether Japan can continue to sidestep the surge in outbreaks that have crippled other rich nations. More than 30 million people in the greater Tokyo metropolitan area are now being asked — though not yet forced — to stay at home.

The big question is whether infection numbers continue to creep higher as they have over the past week, spurring Governor Yuriko Koike to call on residents to avoid unnecessary trips outdoors for two weeks. Surrounding areas followed suit, and told their citizens not to travel to Tokyo.

But the country reported more than 100 new cases on Friday, the largest one-day increase since January. The Defence Ministry sent troops to help quarantine at Narita airport on Saturday, and to transport people entering the country to shelters where they will be tested.

Speaking at a news conference on Saturday evening, he said there was no need to declare an emergency now, but urged the public to remain on guard amid the risk of a sudden, broad spread of the infection.

“I want to take actions that will provide a concentrated, short-term boost in demand,” he said, adding that fiscal, monetary and tax policy would be deployed in unison. Interest-free loans will be made available, including to private-sector financial institutions, he said (story continues below). 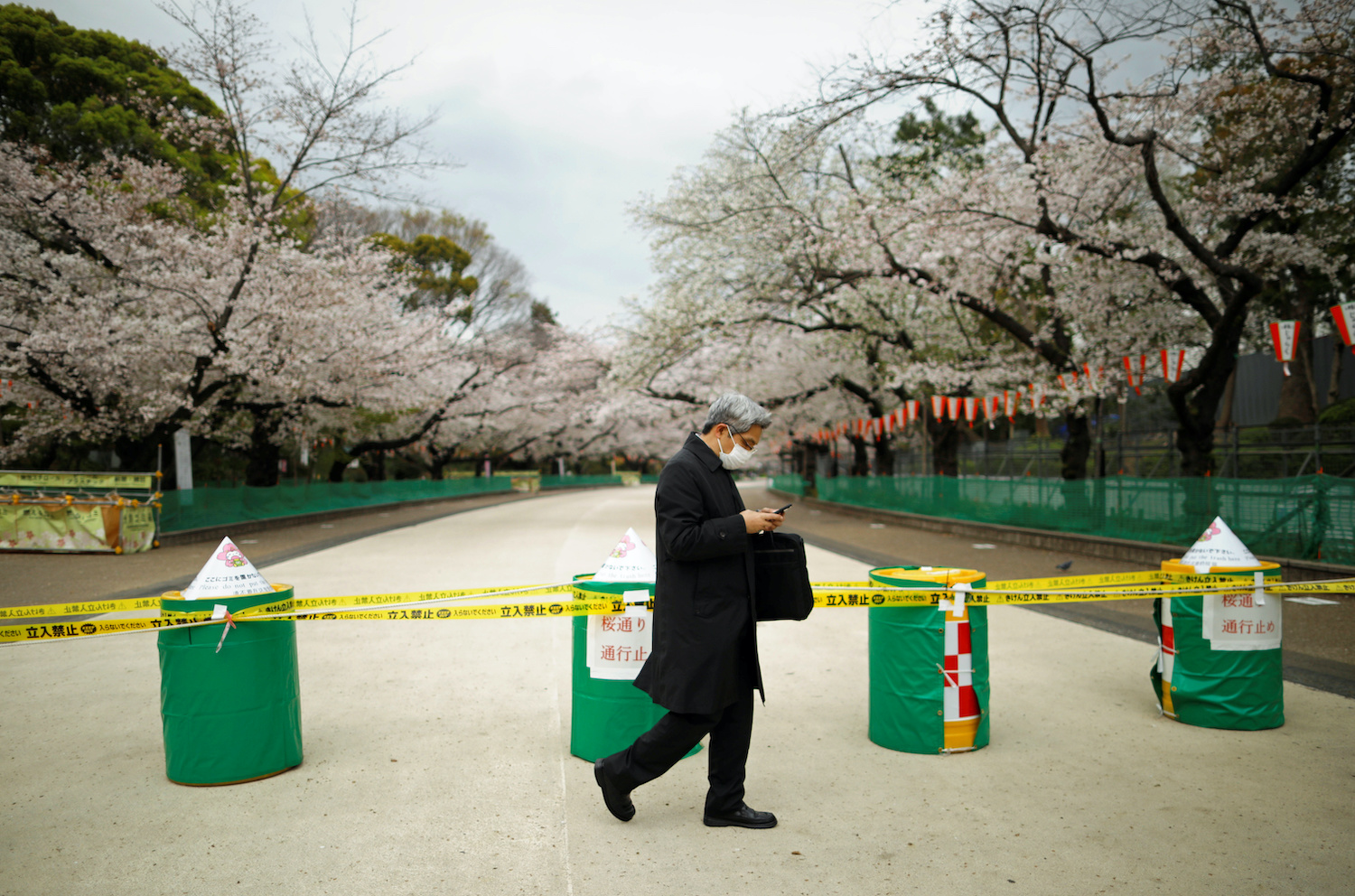 A man wearing a face mask walks past a closed cherry blossom viewing spot in Tokyo on Saturday. (Reuters Photo)

Malaysia expects the number of coronavirus cases to surge in mid-April, a health ministry official said on Saturday, as the country ramps up testing amid a nationwide shutdown.

The number of confirmed cases in the country has nearly doubled in the past week to 2,320, the highest in Southeast Asia, with 27 deaths. It has imposed travel restrictions and a curb on people movement until April 14 to try to contain the spread.

The country can expect a surge in cases by mid-April, said Noor Hisham Abdullah, the director-general of health, citing analysts’ estimates of a peak between 6,300 and 8,900 cases.

“If you can stay at home, break the chain of infection, then we might be able to beat the projections,” he said. “If we can bring it below 5,000, we can achieve our goal.”

Malaysia is considering buying up to 1 million coronavirus test kits from South Korea as it steps up efforts to screen more people.

The figures are “a small achievement that our entire society can celebrate together”, disaster agency official Yoon Tae-ho said.

Once the hardest-hit country outside China, South Korea appears to have brought its outbreak under control thanks to its huge “trace, test and treat” strategy.

It has tested more than 380,000 people in a process that is free to anyone referred by doctors or those who have links to a confirmed case.

Officials in Vietnam ordered one of the country’s largest medical centres to be locked down and demanded thousands of employees and people who recently visited Bach Mai Hospital in Hanoi be tested for Covid-19 after nurses and other staff contracted the disease.

Authorities in the country, which has 169 confirmed cases and no reported deaths, are now working to avert an outbreak that could threaten the lives of many critically ill patients at the hospital as well as a sudden domestic spread of the virus.

In the past 10 days, 14,000 people made outpatient visits to the hospital, the Dan Tri news website reported.

Eight people associated with the hospital, including two nurses who took care of patients, and two food workers, have tested positive for the virus.

Phones but no shoppers

As China reopens its economy after months of lockdown, Apple says its iPhone factories are largely up and running. But with the coronavirus pandemic sweeping the world, the urgent question for the company is how many buyers there will be for current models and the new lineup of 5G phones expected in the fall.

A senior executive at one of Apple’s major contract assemblers said orders for the quarter ending in March are likely to drop 18% compared from last year. The production ramp-up for new phones that work on 5G networks has been postponed, the source said, though it is still possible 5G phones could launch as scheduled in the fall.

“No one is talking about manpower or material shortage (in China) anymore. Now everyone is looking at whether demand from US and Europe could keep up,” said the person, who has direct knowledge of the matter. “The focus now is the demand from consumers in the US and Europe.”

A top Asian security conference that gathers defence ministers — including from the US and China — and senior military officials in Singapore has been cancelled due to the pandemic.

The Shangri-La Dialogue, held annually since 2002, had been scheduled for early June with more than 40 countries set to participate.

But its organiser, the London-based International Institute for Strategic Studies, said it had decided to cancel this year’s event “in light of the serious challenges posed by the global Covid-19 pandemic”.