A dog rests on a deserted road in Yangon, where a 10pm to 4am curfew went into effect on Saturday night. (AFP Photo)

Authorities in Yangon have announced a nighttime curfew in Myanmar’s largest city in a bid to contain the spread of the coronavirus.

The curfew from 10pm to 4am, starting on Saturday night, would affect some 7 million people and would remain in effect until further notice, according to the Yangon Region Government.

Mandalay imposed a similar curfew on Friday, with other major cities across the country expected to follow suit.

Also on Saturday, the Health and Sports Ministry imposed a stay-at-home order in seven townships in Yangon where Covid-19 infections are relatively high. Only civil servants, corporate employees, delivery workers and medical personnel will be allowed to leave their homes.

Anyone who fails to comply faces a jail term of up to six months.

The government has already imposed a countrywide ban on gatherings of more than five people.

Officially, Myanmar has reported just 94 confirmed coronavirus infections as of Saturday morning, 80% of them in Yangon, with five deaths.

The stepped-up measures in Myanmar came on a day when worldwide deaths from the pandemic topped 150,000, with an alarming spike in new cases in Singapore, where hundreds of migrant labourers living in packed dormitories have caught the disease.

In Europe, Spain joined Italy and the US in reporting more than 20,000 deaths from the coronavirus, while deaths rose by more than 800 for a third straight day in the UK and now exceed 15,000. Russia also appears to be emerging as a new hot spot with more than 5,000 people testing positive for Covid-19 in the past 24 hours.

The number of confirmed coronavirus cases in Japan rose to 10,000 on Saturday, just days after a state of emergency was extended to the entire nation.

Prime Minister Shinzo Abe on Friday appealed to citizens to stay indoors as new cases hit a record in Tokyo and amid fears that medical services could fail in rural areas that are home to many elderly people.

Just over 200 people have died from the virus in Japan, but Tokyo remains the hardest-hit area, reporting a record 201 new infections on Friday alone, followed by 181 on Saturday.

Japan conducted about 52,000 polymerase chain reaction (PCR) tests in March, or just 16% of the number carried out in South Korea, according to data from Oxford University.

Japan’s Covid-19 response to date has been bogged down by red tape, staff shortages and the absence of centralised decision-making with no single agency coordinating strategy to fight the disease.

Russian President Vladimir Putin has ordered the government to provide daily forecasts of the spread of coronavirus as his country recorded almost 5,000 new cases in a single day.

The government must “provide a short-term prognosis of the number of citizens who may contract the new infectious disease (Covid-19)” and report its estimates on a daily basis”, the president said, according to an order published on the Kremlin website.

“The disease rate in the city is growing but not exponentially, and far from the worst-case scenario,” he wrote on his website.

“A week ago, Moscow medical institutions were working at their limit. Today, they have switched to a more normal mode with a good stock of capacity.”

Initially declared on March 30, the lockdown regime banned residents from leaving their homes unless they were going to buy food or medicines, get urgent medical treatment or walk the dog.

Authorities and clerics have urged Christians to stay home during the Orthodox Easter weekend, although a senior cleric urged police on Saturday to be lenient on those who still try to make it to their church. (story continues below) 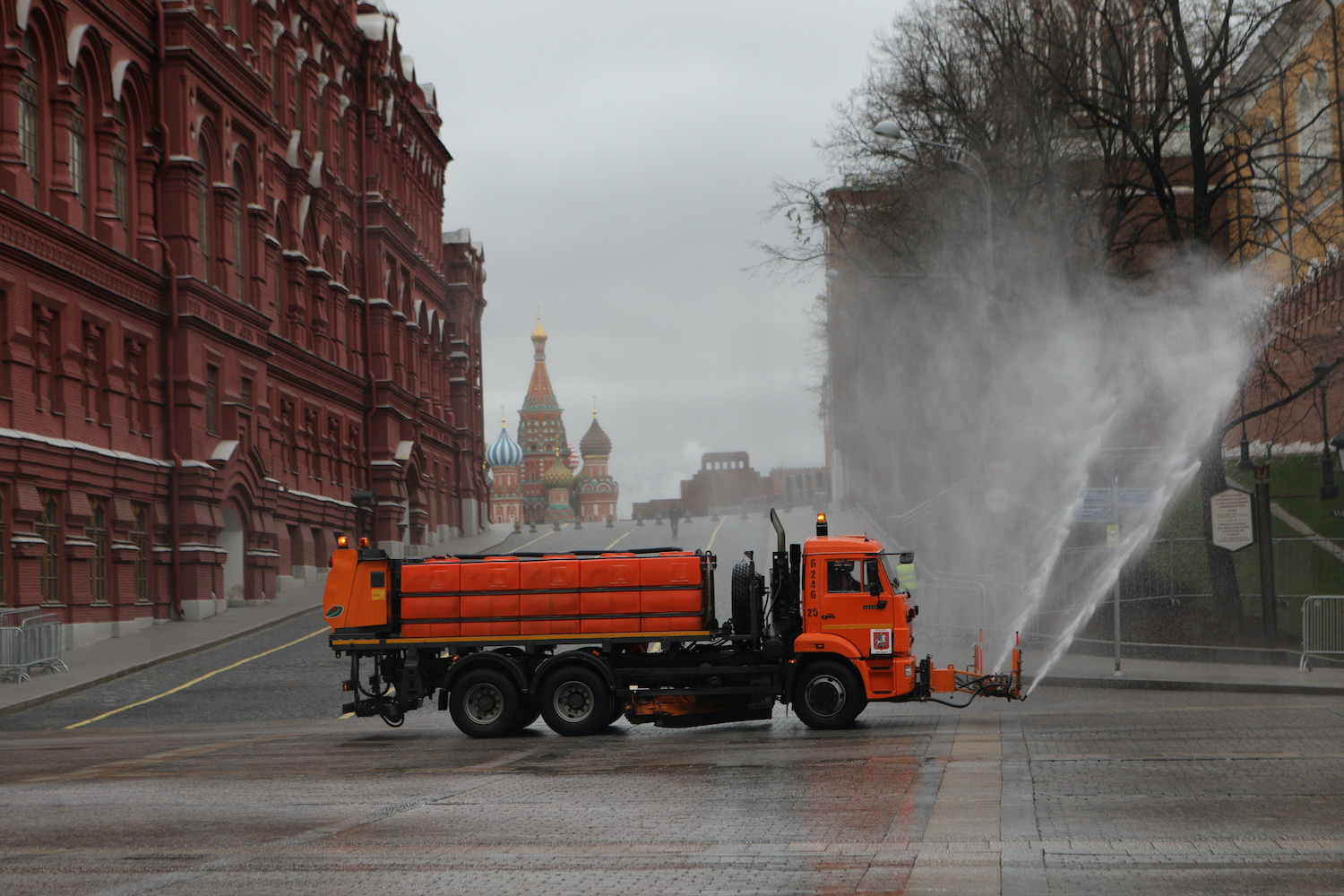 A vehicle sprays disinfectant near Red Square as authorities in Moscow step up their efforts to contain the coronavirus. (Moscow News Agency/via Reuters)

Of the new cases recorded, nine were imported from overseas. There were two more fatalities, raising the death toll to 232, out of total infections of 10,653.

Prime Minister Chung Sye-kyun asked people to refrain from going out and travelling as much as possible during the extended holiday period from the end of April to the beginning of May. (story continues below) 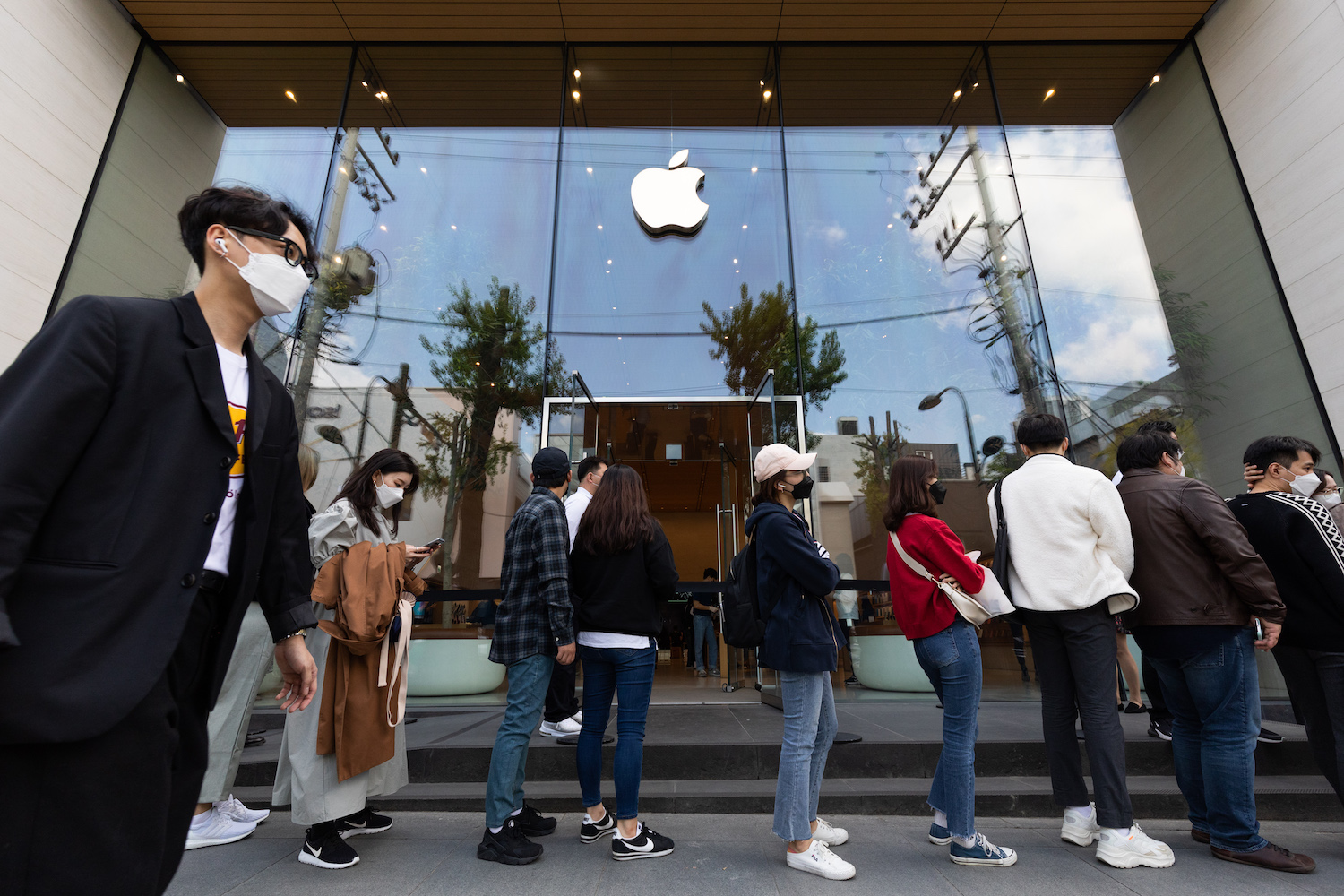 Shoppers queue outside the Apple store as it reopened in the Gangnam district of Seoul on Saturday. It was the first location to come back online since the company shuttered all 458 of its stores outside of China in March. (Bloomberg Photo)

Tens of thousands of people defied a nationwide coronavirus lockdown in Bangladesh on Saturday to attend the funeral of a top Islamic preacher, even as authorities battle a surge in virus cases.

Police had agreed with the family of Jubayer Ahmad Ansari, that only 50 people would attend the funeral in the eastern town of Sarail because of the risk of spreading the disease.

But local police chief Shahadat Hossain said officers were helpless to stop the crowds who came to honour the 55-year-old preacher and seminary head, who died on Friday.

Bangladesh imposed a lockdown on March 26 across the country of 168 million people, where some 2,200 cases and 84 deaths have been reported officially so far.

The prime minister has called on Bangladeshis to pray at home when the Ramadan starts this month. But a group of influential clerics has called on Muslims to turn out in their masses for daily prayers.

Last month at least 25,000 people attended a Muslim prayer meeting in a field in the southern city of Raipur to chant “healing verses” to rid the country of the deadly virus.

China has ordered that anyone in Wuhan working in certain service-related jobs must take a coronavirus test if they want to leave the city where the virus first emerged and killed more than 3,800 people.

People in Wuhan working in nursing, education, security and other sectors with high exposure to the public must take a nucleic acid test before leaving, the National Health Commission said.

People working in other sectors aiming to leave Wuhan are encouraged to take voluntary tests before going.

Within seven days of arrival at their destinations, people who can present test results showing they do not carry the virus, as well as a clean bill of health on a health app, can go back to work.

Everyone else will have to spend 14 days in quarantine before returning to work.

Indonesia has extended stricter social-distancing rules to millions of people living on the main island of Java, and in West Sumatra, as the world’s fourth-most populous nation strives to stem a spike in cases.

Large-scale social restrictions will be put in place across five regions in West Java that collectively house almost 9 million people, Health Minister Terawan Agus Putranto said. A similar order has been given for Tegal, in Central Java, and for the province of West Sumatra, where officials note a significant increase in the spread of Covid-19 cases.

There were 407 new infections in Indonesia on Friday, the biggest daily increase since the southeast Asian country reported its first case, taking total confirmed cases to 5,923. The virus is expected to infect 95,000 people in May and to rise to 106,000 in July, according to government estimates.

North Korean state media reported on Saturday that all foreigners who had been subject to measures aimed at preventing a local outbreak of the new coronavirus have been released from quarantine.

North Korea had as of late February reportedly quarantined some 380 foreigners, including diplomats stationed in Pyongyang.

The country continues to insist that it has no cases of the virus, but some international experts are sceptical.

Taiwan will put 700 navy sailors into quarantine after three coronavirus cases were confirmed among sailors who had been on a goodwill mission to the Pacific island state of Palau.

Three Taiwan navy vessels visited Palau - one of only 15 countries to maintain formal diplomatic relations with Taiwan - in the middle of March, before returning to Taiwan a month later, said Health Minister Chen Shih-chung.

The three confirmed cases had all shared quarters on the same ship, but all 700 sailors on all three ships were being recalled and would be put into quarantine, he said.

The cases are the first reported in Taiwan’s military. The navy is now carrying out a deep cleaning of the three ships.

Taiwan has reported only 398 coronavirus cases and six deaths, a far lower number than many of its neighbours due to strict measures taken in the early stages of the outbreak.

The president of Palau, Tommy Remengesau, told Reuters that his country of 20,000 people had not had a single case of Cocid-19 and he was going to shut it off from the outside world to keep the virus out. 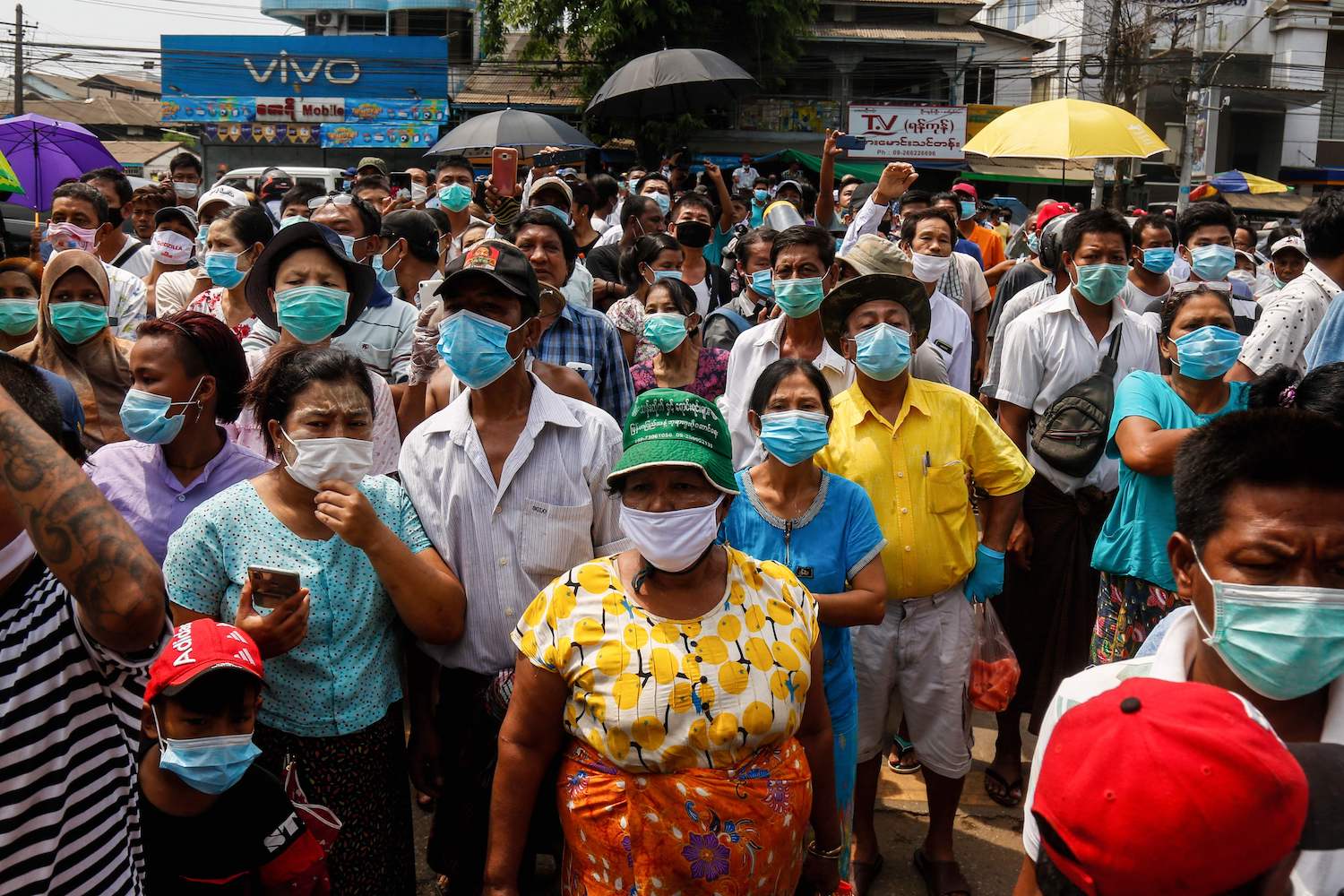 Family members, wearing face masks but not exactly maintaining social distance, wait for relatives to be released from Insein Prison in Yangon on Friday as part of an annual new year amnesty. The president’s office said more than a quarter of the prison population is to be released to ease overcrowding and coronavirus risk. (AFP Photo)

BUENG KAN: A 41-year-old man was arrested as he collected bags of speed pills and crystal methamphetamine worth an estimated 200 million baht left on the bank of the Mekong River in Pak Khat district.

TOKYO: Honda Motor Co is aiming to increase its ratio of electric vehicles (EVs) and fuel cell vehicles (FCVs) to 100% of all sales by 2040, chief executive Toshihiro Mibe said on Friday.