A list of precautions to prevent the spread of Covid-19 is seen at the entrance of a club in Seoul. (Handout Photo via Reuters)

A potential second wave of coronavirus infections could be possible in South Korea after confirmed cases suddenly increased after a lull, with a surge tied to nightclubs in Seoul.

The total number of cases linked to nightclubs in the Itaewon district of the capital had increased to 40 as of Saturday. Seoul Mayor Park Won-soon ordered the closing of all nightclubs, discos, hostess bars and other similar nightlife establishments.

The sudden spike has revived memories of the outbreak among members of a religious sect in late February, which sent daily infections in the nation to almost 1,000.

South Korea, which in early March had the second highest number of cases globally after China, has been able to control the virus spread without having to take severe measures such as imposing a lockdown or banning overseas travel. Instead, authorities have relied on a massive testing and tracing regime.

The country recently began easing its social distancing campaign and earlier this week announced that schools will start reopening on May 13.

As worldwide cases passed 3.9 million and deaths topped 275,000 on Saturday, a top Chinese official admitted the coronavirus outbreak had exposed “shortcomings” in the public healthcare system.

Reforms are under way to improve the country’s disease prevention and control mechanisms, said Li Bin, deputy director of the National Health Commission.

China has faced criticism both at home and abroad for downplaying the virus and concealing information about the outbreak when it first emerged in Wuhan in December.

Beijing has insisted it has always shared information with the World Health Organization and other countries in a timely manner.

But Li admitted the healthcare system had not been adequately prepared, which had left holes in China’s response.

Health authorities, he said, plan to build a “centralised, unified and efficient” leadership system that will allow it to respond more quickly and effectively to any public health crisis in the future, he added.

On Friday Beijing said it would support a World Health Organization-led review into the global response to the outbreak — once the pandemic is over.

The comments came after US President Donald Trump ramped up criticism of China this week, saying the virus “could have been stopped in China”.

Air France will check passengers’ temperatures and could bar anyone from boarding its flights if it is deemed too high when France’s lockdown measures are eased on Monday.

Passengers, crew and staff dealing with customers must also wear masks from Monday, in line with requirements for all public transport, the airline said in statement on Saturday.

Customers with temperatures above 38C “may be denied boarding and their reservation will be changed at no extra charge on a flight at a later date”, it said.

The carrier said it would also try to space passengers as far apart as possible, which is easier given the drop in demand for air travel.

No drinks or food will be served on domestic flights or short trips within Europe.

European Union states should guarantee vouchers for travel cancelled during the pandemic and start lifting internal border restrictions in a bid to salvage some of the summer tourism season, the bloc’s executive will say next week.

Germany and other states have urged a suspension of EU rules that force cash-drained airlines and the hospitality industry to offer full refunds for cancelled flights and trips instead of vouchers for future travel.

The European Commission will tell member states to guarantee vouchers to make them more attractive to customers, according to a strategy document seen by Reuters.

“To provide incentives for passengers and travellers to accept vouchers instead of reimbursement, vouchers should be protected against insolvency of the issuer and remain refundable by the end of their validity if not redeemed,” the document said.

Titled “Europe needs a break” the strategy paper will call for targeted restrictions to replace a general ban on travel and seek a gradual lifting of internal border checks where the health situation has improved.

With Europeans most likely to stay at home or travel shorter distances this summer, peripheral EU regions and islands are likely to be shunned and will take longer to bounce back, it said. 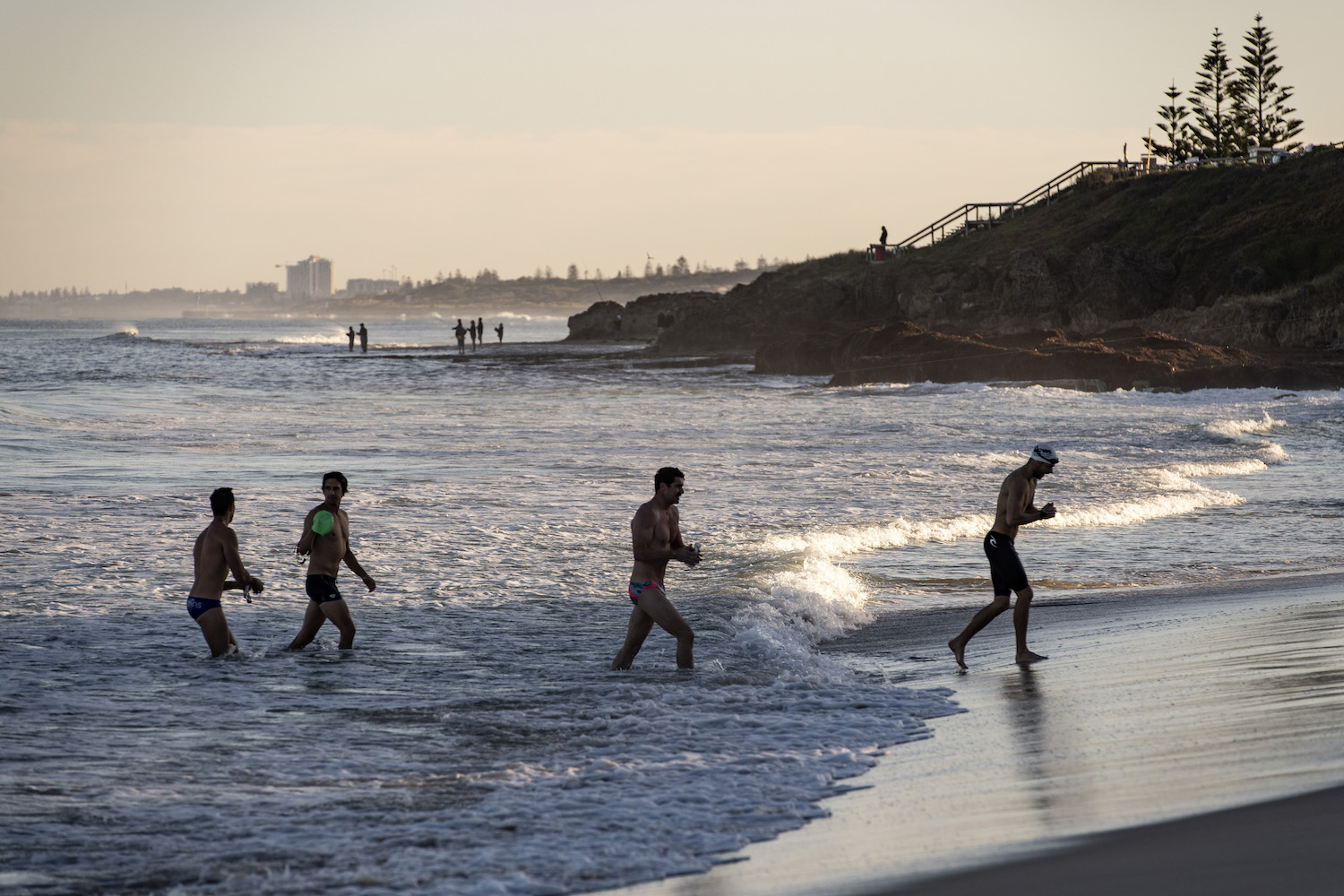 Swimmers emerge from the water at a beach in Cottesloe near Perth in Western Australia, on Saturday. (AFP Photo)

Australia’s most populous states held back from relaxing restrictions on Saturday although other states began allowing small gatherings and were preparing to open restaurants and shops.

Prime Minister Scott Morrison outlined a three-stage plan a day earlier to remove most curbs by July and get nearly 1 million people back to work, given that new confirmed coronavirus infections have fallen to less than 20 a day due to strict lockdowns.

In the capital region, Canberra, and some states people can visit each other again, with indoor and outdoor gatherings, including weddings, of up to 10 people allowed.

In South Australia, outdoor dining at restaurants and cafes will be allowed from Monday seating up to 10 people at a time, and in the Northern Territory, pubs, bars and restaurants will reopen next Friday.

But New South Wales and Victoria, home to Sydney and Melbourne and which account for nearly two-thirds of the country’s coronavirus cases, will only outline plans for easing business restrictions next week at the earliest.

“What we’re doing here, is we very clearly have one country, one direction, different speeds,” Health Minister Greg Hunt told reporters in a suburb of Melbourne.

NSW Health Minister Brad Hazzard said that while the rate of infection in the state had dropped, the government was still working on a plan for getting people back to work. He did not say when that would be ready.

Although visits of up to two adults in NSW are now allowed, Hazzard urged people not to let their guard down on social distancing and hand-washing when visiting on Mother’s Day on Sunday.

“It’s really tough to not be able to hug your mum or kiss your mum, but it would be the wisest course to not do that,” he said.

US legislators have written to nearly 60 countries asking them to support Taiwan’s participation in the World Health Organization, citing the need for the broadest effort possible to fight the coronavirus pandemic.

Taiwan has been excluded from the WHO, a UN agency, due to objections from China.

All countries should “prioritise global health and safety over politics”, the leaders of US congressional foreign affairs committees said in a letter sent on Friday.

Taiwan, which has had one of the lowest Covid-19 infection rates in the world, has argued that its exclusion from the WHO has created a dangerous gap in the global fight against the virus.

Arctic cold 'no sweat' for electric cars in Norway

The Supreme Court upholds the death sentence for three men convicted of the murder of a waitress slain in 2016 for having an affair with a woman singer desired by a police colonel.