Reindeer herders in Sweden's indigenous Sami community say they are having to adapt to fluctuating weather temperatures.

But now Margret Fjellstrom and Daniel Viklund, a married couple from Sweden's indigenous Sami community with hundreds of tawny reindeer, worry about a new threat.

Shifting weather patterns in northern Sweden are forcing them to go further afield to find grazing for their hungry reindeer, pushing up costs and taking more time.

Dressed warmly in jackets and ski pants against the minus 17-degree-Celsius temperatures, the couple watched on a February morning as their animals pawed through deep snow for the lichen they eat.

It's their main food source in winter on the hillsides near Sweden's Baltic Sea coast.

Back when snowfall like this was a regular occurrence, Fjellstrom's herder parents would follow the same migration routes year in, year out, stopping at tried-and-tested spots for food.

But that isn't the case now.

"It can rain in January, it can snow in May, there's no logic to it any more," Fjellstrom, 39, said, sitting with Viklund by their snowmobiles.

Between 1991 and 2019, parts of northern and eastern Sweden saw a rise in average temperature of nearly 2°C to the 1860-1900 period, Sweden's meteorological institute said in a report.

For several days in early January, temperatures in the north climbed about 10°C more than normal, the institute said.

And on January 2, three weather stations in central Sweden reported their highest temperatures for the month since 1971.

Unseasonably high temperatures cause the snow to thaw and freeze again when the cold returns, building up thicker layers of ice that prevent the reindeer from digging down through the snow to the lichen.

To ensure they will find food during the migration, the couple spends two months taking turns to scout out unfamiliar areas, before setting off with the animals.

Moving the reindeer from their summer pasture now often involves navigating them around motorways, windfarms or hydroelectric projects.

The journey this year took nearly twice as long as it would have done in predictable weather, Fjellstrom said.

"The biggest problem today is climate change," she bemoaned. (continues below) 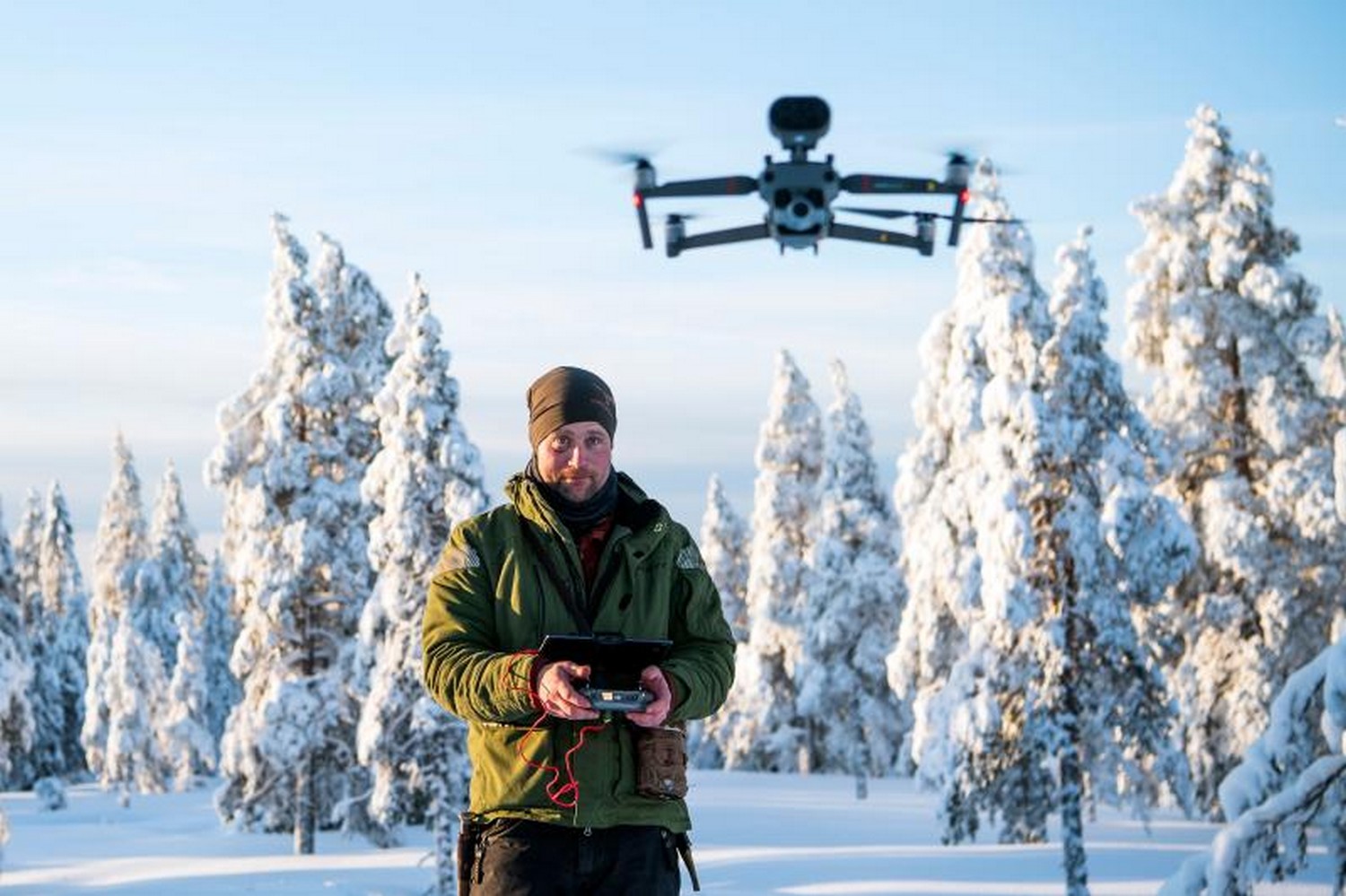 Daniel Viklund from the Vilhelmina Norra Sameby flys his drone in the area where his reindeer herd is located during the winter season on Feb 4, 2020 near Ornskoldsvik in northern Sweden. (Photo: Jonathan Nackstrand/ AFP)

The Sami have herded reindeer across areas of northern Sweden, Norway, Finland and Russia for generations and are thought to number between 80,000 and 100,000, with many living above the Arctic Circle.

In Sweden, only the Sami are allowed to herd the animals, raised for their meat, pelts and antlers.

Fjellstrom and Viklund annually move their herd from Dikanas, a village 800 kilometresnorth of Stockholm, to the plains near Ornskoldsvik.

They transport them first by lorry, then release them and follow by snowmobile, tracking them using GPS collars.

Viklund watched as the reindeer disappeared into the snow-dusted forest, before launching a drone with a speaker attached into the freezing air above.

It allows him to keep track of the animals when poor snowfall makes travel by snowmobile impossible.

He can also herd them on with recordings of his dog barking when they head to areas with little food or hazards like roads or windfarms whose turbine noise scares the reindeer.

"We're getting more and more days that don't look like this, the snow is just a few centimetres," he said.

"It's a way to adapt." (continues below) 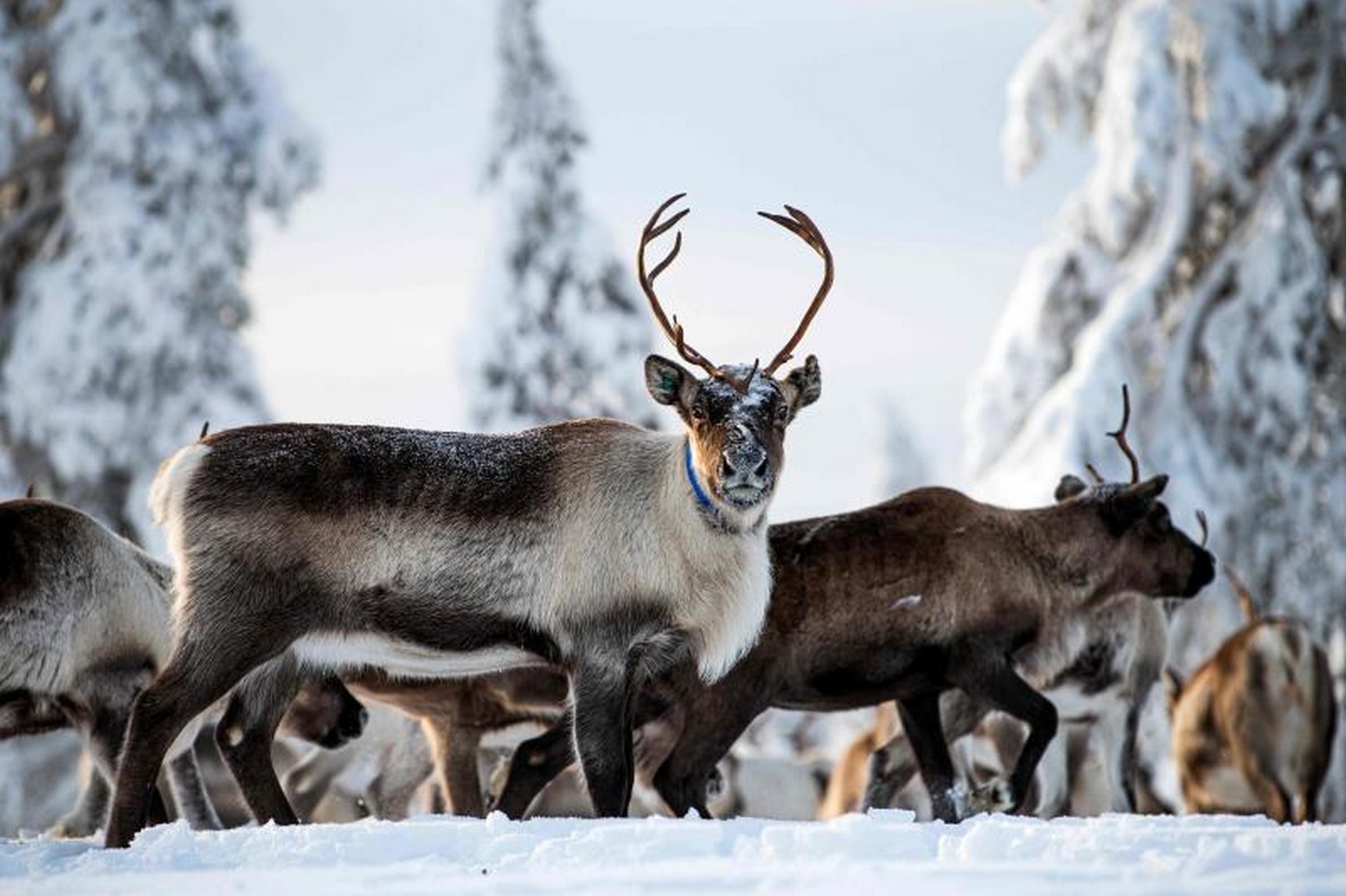 Reindeer from the Vilhelmina Norra Sameby, at their winter season location on February 3, 2020 near Ornskoldsvik in northern Sweden.. (Photo: Jonathan Nackstrand/AFP)

Concerned that the animals get enough to eat, the couple split their herd and asked Fjellstrom's cousin to move the other half.

It's an added expense for 31-year-old Neila Fjellstrom but he understands the need.

"The unusual winter is a normal winter," he said.

The Sami peoples and their reindeer are especially vulnerable to the effects of climate change, according to research.

A "warming climate alters the vegetation conditions and threatens the reindeer's wellbeing and access to food," Finland's University of Oulu and its Center for Environmental and Respiratory Health Research said in a study last year.

Many Sami are more worried about fluctuating temperatures now, than encroaching infrastructure, said Gunhild Rosqvist, a Stockholm University researcher into the effects of climate change in mountain and polar environments.

"I think their awareness of their vulnerability has increased a lot," she told AFP.

At the annual Sami market in Jokkmokk above the Arctic Circle in early February, thousands of Sami mixed with tourists, just weeks before the new coronavirus forced countries around the world to introduce lockdowns.

Reindeer products were proudly on display, from steaming pots of reindeer stew to soft pelts and knives with handles carved from antlers.

"Reindeer herding has been practised for many hundreds of years and it's an important part of Sami culture," Kjell-Ake Aronsson, a researcher at the local museum, said.

"Reindeer meat is an important product," he also added.

"A lot of people are related indirectly to reindeer herding."

Sweden's Sami parliament estimates around 2,000 people are directly dependent on herding the country's 250,000 animals for a living.

Away from the crowds, young Sami activists, in traditional outfits embroidered in blues and reds, gathered for a "climate strike" attended by Greta Thunberg.

Fjellstrom and Viklund's 17-year-old daughter Alva also spoke at the event and hopes to become a herder herself.

But the increased effort needed for herding reindeer now makes Viklund worry about the future.

"I want to give my children the opportunity to do it," he said, the sun casting long, blue shadows across the snow.

"Climate change could destroy that dream."