A girl gets her hair cut by staff wearing protective gear at a salon in Kolkata, India on Friday. (Photo: Reuters)

Modi is due to address the nation in a radio broadcast on Sunday, when he is expected to lay down fresh guidelines after 65 days of lockdown.

In an open letter marking one year into his second term, Modi on Saturday urged people to follow lockdown rules to stop the spread of the pandemic as there was a “long battle” ahead.

“Our country (is) besieged with problems amidst a vast population and limited resources,” Modi said, adding that labourers and migrant workers had “undergone tremendous suffering” due to restrictions.

While fatality rates in India have been comparatively low, experts warned that the pandemic’s peak has not been reached as new infections are increasing.

Earlier on Saturday, the state carrier Air India said it had to recall a plane heading to Moscow to bring home stranded citizens after a crew member tested positive for Covid-19.

Officials are nervous about the pandemic spreading through villages as millions of jobless migrant workers return home from cities.

Rights activists and the opposition have criticised Modi’s handling of the pandemic, accusing him of announcing an abrupt lockdown that left the poor in the lurch and forced thousands to walk or jostle for space on buses and special trains to reach home while fearing infection.

More than 100 migrant workers have died either in accidents or due to starvation as they tried to return to their villages, the home ministry official said.

Thirty-eight of Japan’s 47 prefectures are set to fully reopen their economies on Monday as they seek to strike a balance between rebuilding the economies hit by the virus and imposing measures to prevent a second wave of infections.

Schools will also reopen across the country, a week after Prime Minister Shinzo Abe fully lifted the state of emergency.

With businesses resuming in stages since early May, a total of 38 prefectures such as Hokkaido, Aichi and Hyogo will lift restrictions on operations of shops and leisure facilities on Monday.

Given their small number of infections, Okayama and Tokushima prefectures had not asked businesses to suspend operations.

In the remaining seven prefectures including Tokyo and Fukuoka, such requests will be maintained for businesses with records of having clusters of infection, such as clubs with live music.

With a decreasing number of new infections, Tokyo on Monday will enter the second phase of a relaxation of restrictions, which will include the reopening of most facilities such as cinemas, sports gyms and cram schools.

But the situation remains in the balance in the capital, which has been hit hardest in Japan, after the metropolitan government reported 14 new infections on Saturday.

Although it was down from 22 the previous day and a peak of more than 200 in mid-April, the figure reached double digits for the fifth straight day.

Following Abe’s declaration of the end of the national emergency over the virus, elementary, junior high and high schools will resume classes on Monday.

In Tokyo and other municipalities with many reported infection cases, however, schools are being asked to adopt staggered arrival times and shortened class hours. (story continues below) 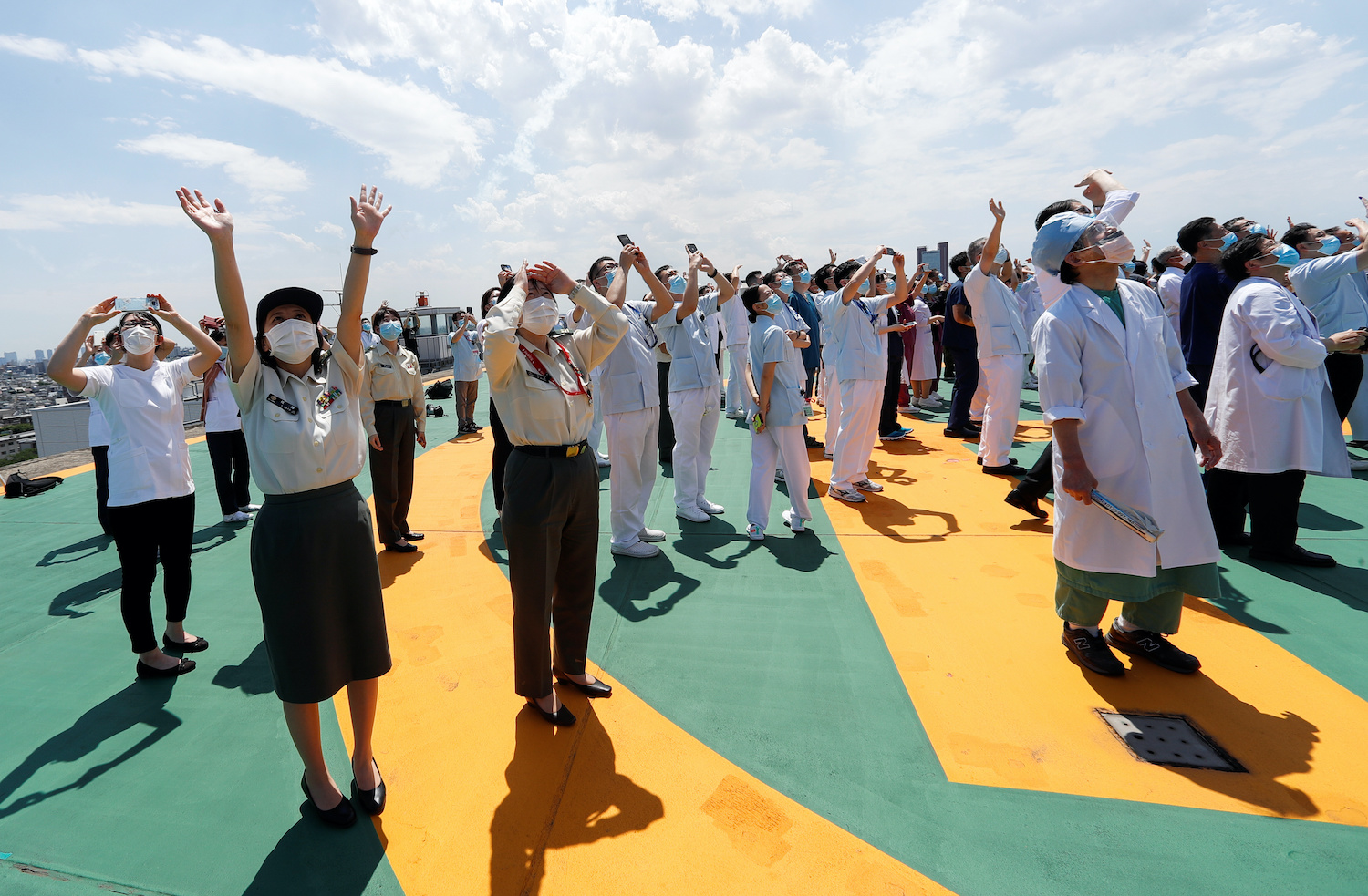 Medical workers watch the Blue Impulse aerobatic team of the Japan Air Self-Defense Force as they fly over the Self-Defense Forces Central Hospital to salute the staff on the front line of the fight against Covid-19 in Tokyo on Friday. (Reuters Photo)

Sanofi has temporarily stopped recruiting new Covid-19 patients for two clinical trials on hydroxychloroquine and will no longer supply the anti-malaria drug to treat Covid-19 until concerns about safety are cleared up, it said.

The moves come after the World Health Organization paused its large trial of hydroxychloroquine, prompting several European governments to ban the use of the drug, also used in rheumatoid arthritis and lupus.

That dealt a major blow to hopes for a treatment, touted by US President Donald Trump, as drugmakers and governments race to find ways to treat patients and control the coronavirus.

Sanofi has been conducting two randomised, controlled clinical trials of hydroxychloroquine for Covid-19.

The first was expected to test 210 patients in United States, France, Belgium and the Netherlands who were not in hospital and suffering from the early stage of the disease while the second focused on hospitalised patients with moderate to severe Covid-19 in Europe. It was planned to include around 300 patients.

The concerns of the WHO centred on a report published by the British medical journal The Lancet, stating that patients getting the drug had increased death rates and irregular heartbeats.

The Lancet on Friday issued a correction to the study regarding the location of some patients following criticism of its methodology, but said the conclusions were not changed. The study was not a randomised trial but rather a retrospective analysis of medical records.

Sanofi and rival Novartis have pledged donations of tens of millions of doses of the drug for Covid-19. Last month, the French company said it had already doubled production capacity at eight sites and was poised to increase further.

Norway and Denmark will allow tourists to travel between the two countries from mid-June, their governments announced on Friday, although border crossings with Sweden, where the number of Covid-19 infections is higher, will remain restricted.

Danish Prime Minister Mette Frederiksen and Norwegian Prime Minister Erna Solberg said in separate news conferences that most restrictions related to travel between the two countries would end on June 15.

“We can’t open too suddenly, that would jeopardise everything we’ve accomplished,” Norway’s Solberg said.

Denmark will also welcome tourists from Germany and Iceland. All foreign visitors will need to book at least six nights’ accommodation before arriving and they will not be allowed to stay in Copenhagen, where most of the country’s coronavirus infections are.

Tourists from Sweden will still not be able to visit. Sweden’s death rate per capita from the disease is many times higher than the combined total of the other Nordic countries.

“We are looking at the possibility of regional solutions, for example opening up the Oresund region,” Swedish Foreign Minister Ann Linde said at on Friday, adding she had been in contact with the Danish foreign ministery.

Meanwhile, Sweden has advised all its citizens against travelling abroad until July 15.

On Tuesday, Linde had said that excluding Sweden from moves to open borders across the Nordic region would be a political decision and not justifiable on health grounds.

She also added that the Covid-19 spread and death rate was higher in the Copenhagen area than in the Swedish region Skane that borders Denmark.

Thousands of people are also exempt from the travel restrictions and commute daily between Denmark and southern Sweden.

The idea of “travel bubbles”, or travel corridors, is gaining traction with governments around the world as a way to restart international travel as the pandemic eases.

Jakarta is anticipating one million vehicles will enter the city as people return to the Indonesian capital from Eid al-Fitr holidays. Traffic, including motorcycles, is projected to peak from Saturday to Monday, according to a Cabinet Secretariat statement.

While the figure is lower compared to the 2.8 million vehicles recorded last year, the flow of so many travellers is raising concern as the nation’s coronavirus cases grow.

Indonesia now has the highest coronavirus death toll in Southeast Asia, with 1,573 people succumbing to the disease as of Saturday. New cases have more than doubled in May, with the total reaching 25,773.

A front-running Covid-19 vaccine being developed in China is expected to be available as soon as the end of this year, according to a report published in the official WeChat account of the State-owned Assets Supervision and Administration Commission.

The vaccine, jointly developed by the Beijing Institute of Biological Products and China National Biotec Group Co, has completed phase II testing and may be ready for the market at the end of this year or early next year, said the report.

The production line for the vaccine will be fully disinfected and closed in preparation for output to start Saturday, and will have a manufacturing capacity of 100 million to 120 million doses each year.

A total of 108 infections are related to the centre, the vice-head of the Korea CDC said. That tally includes 73 employees and 35 people who might have come into contact with the employees.

A separate outbreak related to nightclubs in the Itaewon district of Seoul had increased to 269 infections as of Saturday, officials said.