Protesters participate in a Black Lives Matter rally in Brisbane, Australia on Saturday. (AAP via Reuters)

Thousands took to the streets across Australia on Saturday, as did hundreds in Tokyo and Seoul to support US protests against police brutality, while demonstrations were expected around Europe later in the day.

The rolling, global protests reflect rising anger over police treatment of ethnic minorities, sparked by the May 25 killing of George Floyd in Minneapolis after a police officer detaining him knelt on his neck for nearly nine minutes as fellow officers stood by.

Demonstrations in Asia Pacific, however, were limited by social-distancing curbs aiming at stopping the coronavirus pandemic.

In the United States on Friday, prominent Democratic politicians adopted the slogans of the protests and announced reforms to curb police abuses, as tensions remained high in major cities after days of largely peaceful protests that saw sporadic violence.

In Brisbane, police estimated 10,000 people joined a peaceful protest, wearing masks and holding “Black Lives Matter” placards. Many wrapped themselves in indigenous flags, calling for an end to police mistreatment of indigenous Australians.

Rallies were also held in Melbourne, Adelaide and other Australian cities.

In Tokyo, marchers protested against what they said was police treatment of a Kurdish man who says he was stopped while driving and shoved to the ground, leaving him with bruises.

Organisers invoked the US protests, saying they were also marching in support of the Black Lives Matter movement.

“I want to show that there’s racism in Japan now,” said 17-year-old high school student Wakaba, who declined to give her family name.

She and her friend, Moe, marching in their school uniforms, held a sign saying: “If you’re not angry, you’re not paying attention”.

“No justice, no peace, no racist police,” the crowd chanted.

In Seoul, dozens of South Korean activists and foreign residents gathered, some wearing black masks with “can’t breathe” in Korea, echoing George Floyd’s final words as he lay on the pavement. Others participated in an online “viral photo protest”.

“South Korea is becoming a multicultural society,” organiser Shim Ji-hoon told Reuters. “So I proposed this march to have awareness of racial discrimination and make a world of living together.”

With pandemic restrictions in Bangkok, activists were going online, asking for video and photos of people wearing black, raising their fists and holding signs, and explaining why they “stand united behind Black Lives Matter”.

The Thai protesters plan to gather on the video-meeting platform Zoom on Sunday and observe 8 minutes 46 seconds of silence — the period that Floyd was filmed pinned under knee of the officer, who has been charged with murder.

Around Europe, which has seen an unprecedented wave of anti-racism rallies drawing tens of thousands onto the streets, weekend protests were planned in Germany, Britain, France, Spain, the Netherlands, Belgium and Hungary.

As in Seoul, Paris authorities banned demonstrations in front of the local US Embassy, citing the coronavirus.

Some European demonstrators have been wearing masks and maintaining social distance, but in some places — notably Germany on Friday — large numbers marched closely together.

Banners and slogans have focused not just on George Floyd but on a string of other controversies in specific countries and mistreatment of minorities in general. 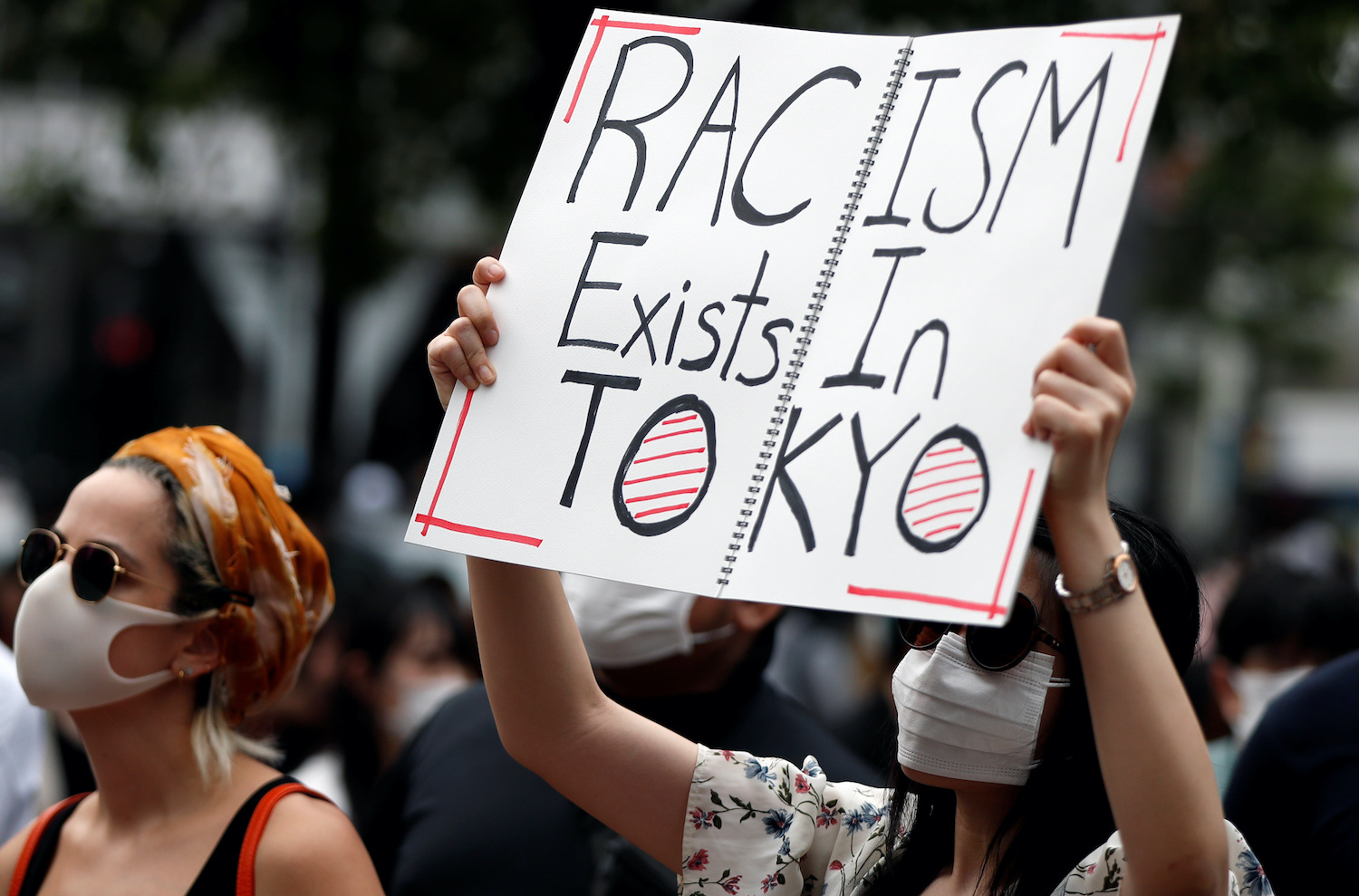 A demonstrator holds a placard during a protest march in Tokyo on Saturday over the alleged abuse by Japanese police of a Kurdish man. (Reuters Photo)