The second blast sent an enormous orange fireball into the sky, immediately followed by a tornado-like shockwave that flattened the port and shattered windows across the city.

The explosions -- which were heard in Nicosia, 240 kilometres away in Cyprus -- were logged by seismologists, registering as the equivalent of a 3.3-magnitude earthquake.

Around 4,000 people were hurt by the blasts, with injuries recorded right across the city.

Lebanon is already reeling from an economic crisis that has left more than half of the population in poverty. The situation has been worsened in recent months by the coronavirus pandemic.

Prime Minister Hassan Diab said 2,750 tonnes of the agricultural fertiliser ammonium nitrate that had been stored for years in a portside warehouse had blown up, sparking "a disaster in every sense of the word".

"What happened today will not pass without accountability," said Diab. "Those responsible for this catastrophe will pay the price." 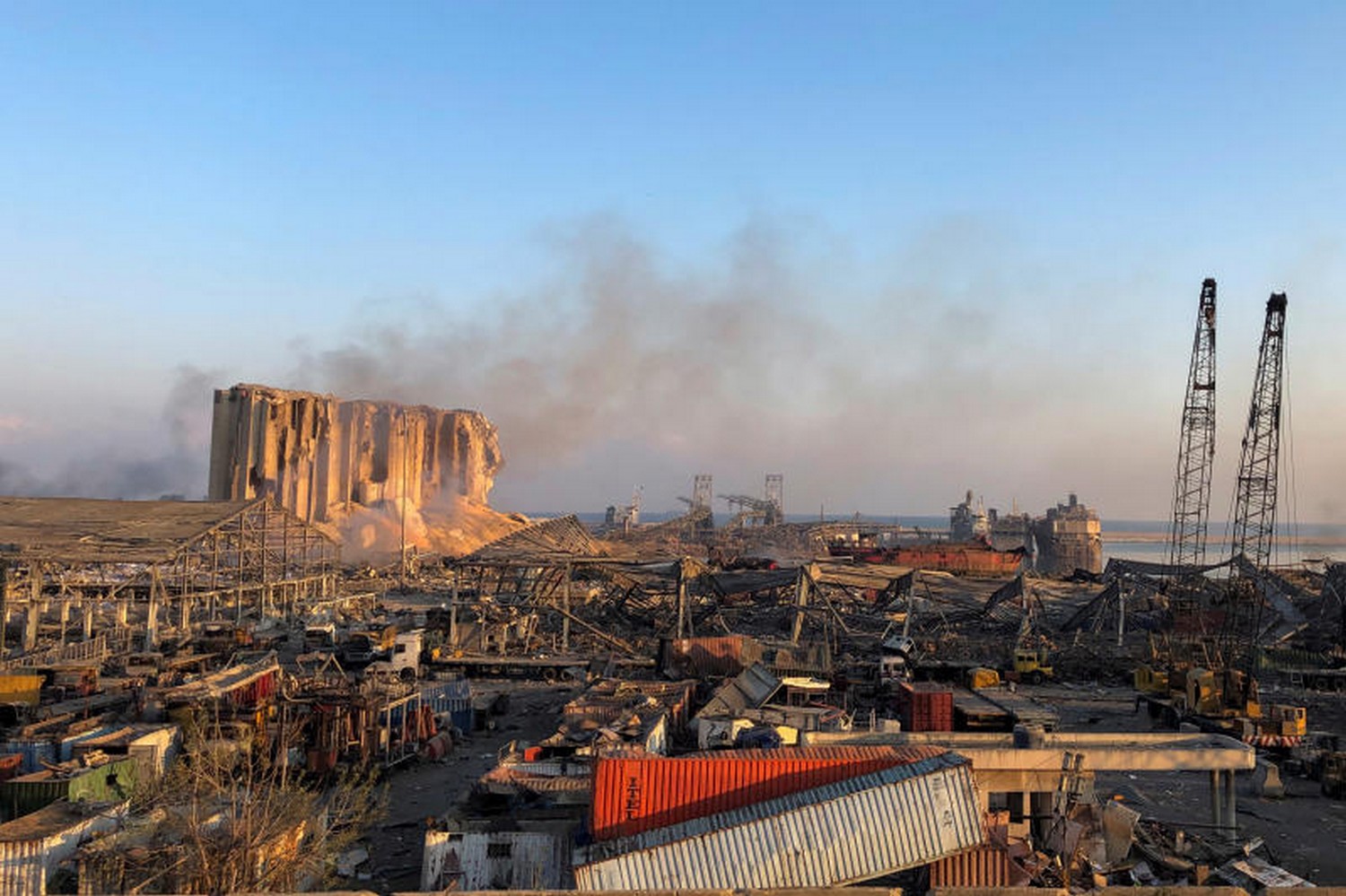 The aftermath at the site of Tuesday's blast in Beirut's port area, Lebanon.(Photo: Reuters)

General Security chief Abbas Ibrahim said the material had been confiscated years earlier and stored in the warehouse, just minutes from Beirut's shopping and nightlife districts.

A soldier at the port, where relatives of the missing scrambled for news of their loved ones, told AFP: "It's a catastrophe inside. There are corpses on the ground. Ambulances are still lifting the dead."

A woman in her twenties stood screaming at security forces, asking about the fate of her brother, a port employee.

"His name is Jad, his eyes are green," she pleaded, to no avail as officers refused her entry.

"It was like an atomic bomb," said Makrouhie Yerganian, a retired schoolteacher in her mid-70s who has lived near the port for decades.

"I've experienced everything, but nothing like this before," even during the country's 1975-1990 civil war, she said.

"All the buildings around here have collapsed."

AFP correspondents across the city saw shop and apartment windows blown out and streets covered with broken glass.

Photos posted online showed damage to the inside of Beirut airport's terminal, nine kilometres from the explosion.

Hospitals already struggling with the country's coronavirus outbreak were overwhelmed by the influx of wounded people and the country's Red Cross called for urgent blood donations.

'We saw the mushroom'

As the national defence council declared Beirut a disaster zone, Diab appealed to Lebanon's allies to "stand by" the country and "help us treat these deep wounds".

Condolences poured in from across the world with Gulf nations, the United States and even Lebanon's arch foe Israel offering to send aid. France also promised to send assistance.

AFP video footage showed areas of near-complete devastation, with cars flipped onto their roofs, warehouses flattened and survivors drenched from head to toe in their own blood.

"We heard an explosion, then we saw the mushroom," said a Beirut resident who witnessed the second deafening explosion from her balcony in the city's Mansourieh district.

"The force of the blast threw us backwards into the apartment." 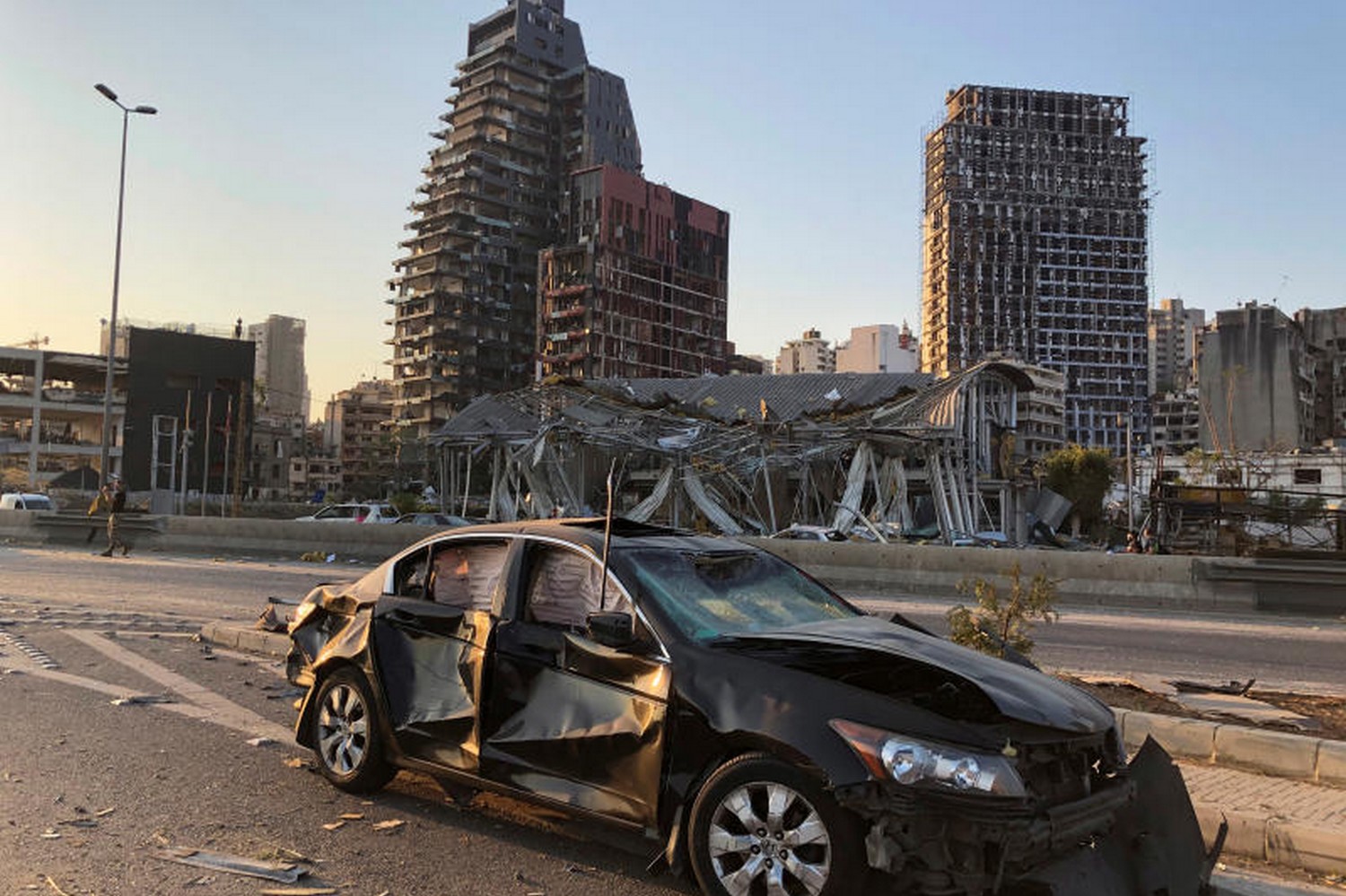 A damaged vehicle and buildings near the site of Tuesday's explosions in Beirut's port area, Lebanon. (Photo: Reuters).

An AFP correspondent at the scene minutes after said every shop in the Hamra commercial district had been damaged, with entire storefronts destroyed and many cars wrecked.

A huge blaze sent up black smoke from the port area, as helicopters dumped water on burning buildings.

A ship moored off the port was on fire, and the blasts also damaged a vessel deployed with United Nations peacekeeping force UNIFIL and injured some of its personnel.

Hundreds shared their shock and grief on social media.

"Buildings are shaking," tweeted one resident, while another wrote: "An enormous, deafening explosion just engulfed Beirut. Heard it from miles away."

The explosions hit a country already reeling from its worst economic crisis in decades.

The local currency has plunged, and businesses have shuttered en masse, as poverty and unemployment have soared at an alarming rate.

Charity Save the Children said "the incident could not have occurred at a worse time".

A woman who was participating in a demonstration against the Feb 1 military coup was shot dead on Saturday in Monywa in central Myanmar, local media reported.

Auckland locked down after 1 case found