Protesters hold signs as they take part in a demonstration against the military coup in front of the Indonesian embassy in Yangon, Myanmar on Wednesday. (AFP photo)

Myanmar's foreign minister visited Thailand on Wednesday in the first visit abroad by a senior Myanmar official since the military seized power in a coup early this month.

The junta representative's visit comes as Indonesia is pushing for a special foreign ministerial meeting of the 10-nation Association of Southeast Asian Nations to discuss the Myanmar situation.

Wunna Maung Lwin was appointed by the military to replace Aung San Suu Kyi as foreign minister. Suu Kyi, who doubled in that capacity while being Myanmar's de facto leader, remains in detention following the coup.

The ouster of the elected government has sparked daily demonstrations across the Southeast Asian nation, with protesters demanding that Suu Kyi and other detained political figures be released. A general strike on Monday shut many businesses.

Indonesia said Wednesday it was in talks with both sides in Myanmar's political crisis and its foreign minister may visit to help find a solution, but she had no plans for an immediate trip.

The statement came after a leaked Myanmar government document showed Indonesian Foreign Minister Retno Marsudi was to visit the coup-hit nation on Thursday. 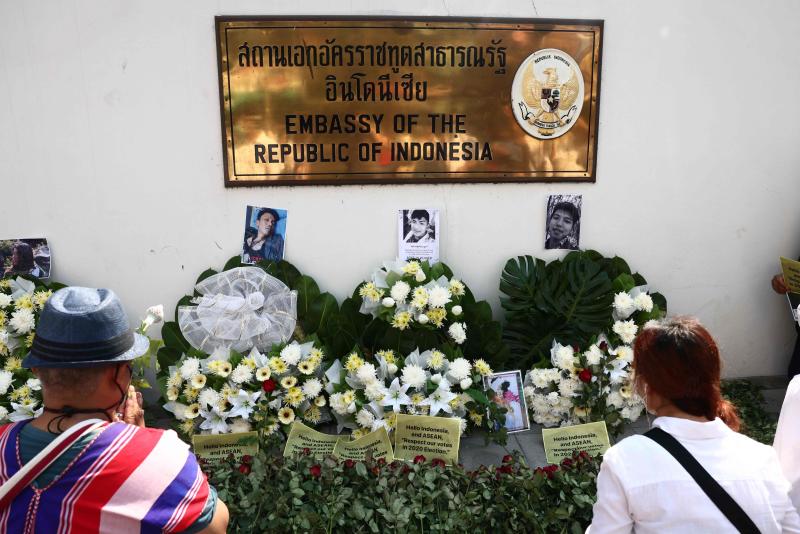 Myanmar migrants living in Thailand gather for a demonstration remembering protesters killed while rallying against the military coup in their home country, and calling for the results of the 2020 Myanmar election to be upheld, outside the Indonesian embassy in Bangkok on Tuesday. (AFP photo)

The trip was not confirmed by Indonesia -- a key diplomatic player among Southeast Asian nations -- and it said Wednesday that no visit had been scheduled.

But it left open the possibility of a later trip by Marsudi, who was still expected to visit Myanmar for a special meeting of foreign ministers from the Association of Southeast Asian Nations (Asean).

The timing of that meeting has yet to be announced.

"After taking into account current developments and following the observations of a number of Asean countries, this is not the ideal time to conduct a visit to Myanmar," Foreign Ministry spokesman Teuku Faizasyah told reporters in Jakarta.

"(But) Indonesia is also committed to keep communicating with all parties in Myanmar."

Faizasyah later told AFP: "We're open to the visit as an option, but we have to carefully decide (its timing)".

Marsudi would have been the first foreign envoy to visit Myanmar since a Feb 1 military-led coup.

The Indonesian foreign minister said Indonesia is conducting "intensive" talks with both the Myanmar military and the opposition civilian government to "contribute to problem-solving in Myanmar."

"We ask for everybody to use restraint and not resort to violence ... to avoid casualties and bloodshed," Retno told reporters after the meeting with the Thai and Myanmar foreign ministers.

Myanmar authorities have ratcheted up their use of force against a massive and largely peaceful civil disobedience campaign for the return of Suu Kyi.