‘Better to walk through a minefield’: victims of Burma Army speak
World

‘Better to walk through a minefield’: victims of Burma Army speak

Shwe Yote Hlwar, 5, holds a portrait of her father, Zwe Htet Soe, 26, who was shot and killed while protesting, during his funeral in Yangon, Myanmar, March 5, 2021. The military and its brutal practices are an omnipresent fear in Myanmar, one that has intensified since the generals seized full power in a coup last month. (Photos: The New York Times)

The soldiers from Myanmar’s army knocked on U Thein Aung’s door one morning last April as he was having tea with friends, and demanded that all of them accompany the platoon to another village.

When they reached a dangerous stretch in the mountains of Rakhine state, the men were ordered to walk 100 feet ahead. One stepped on a land mine and was blown to pieces. Metal fragments struck Thein Aung in his arm and his left eye.

“They threatened to kill us if we refused to go with them,” said Thein Aung, 65, who lost the eye. “It is very clear that they used us as human land mine detectors.”

The military and its brutal practices are an omnipresent fear in Myanmar, one that has intensified since the generals seized full power in a coup last month. As security forces gun down peaceful protesters on city streets, the violence that is commonplace in the countryside serves as a grisly reminder of the military’s long legacy of atrocities.

During decades of military rule, an army dominated by the Bamar majority operated with impunity against ethnic minorities, killing civilians and torching villages. The violence continued even as the army ceded some authority to an elected government in a power-sharing arrangement that started in 2016.

The next year, the military drove more than 700,000 Rohingya Muslims out of the country, an ethnic cleansing campaign that a United Nations panel has described as genocidal. Soldiers have battled rebel ethnic armies with the same ruthlessness, using men and boys as human shields on the battlefield and raping women and girls in their homes.

The generals are now fully back in charge, and the Tatmadaw, as the military is known, has turned its guns on the masses, who have mounted a nationwide civil disobedience movement.

The crackdown widened Monday in the face of a general strike, with security forces seizing control of universities and hospitals and annulling press licenses of five media organizations. At least three protesters were shot dead.

More than 60 people have been killed since the Feb 1 coup, an increasingly bloody crackdown reminiscent of when the military crushed pro-democracy protests in the past.

“This is an army with a heart of darkness,” said David Scott Mathieson, an independent analyst who has long studied the military’s practices. “This is an unrepentant institution.”

Brutality is ingrained in the Tatmadaw. It came to power in a 1962 coup, saying that it had to safeguard national unity. For decades, it has fought to control parts of the country, inhabited by ethnic minority groups, that are rich in jade, timber and other natural resources.

During the past three years, the Tatmadaw has waged war intermittently against ethnic rebel armies in three states, Rakhine, Shan and Kachin. The most intense fighting has been in Rakhine, where the Arakan Army, an ethnic Rakhine force, is seeking greater autonomy.

Civilians are often casualties in these long-running conflicts, as 15 victims, family members or witnesses in these three states attested in interviews with The New York Times.

Six men described how they were injured by land mines or gunfire when soldiers forced them to risk their lives. Several women recounted being raped by soldiers, while others recalled husbands and sons who never returned after soldiers took them away.

The Times was connected to the victims by local rights groups that had documented their accounts, gone to the locations, interviewed witnesses and broadly corroborated the events. Rights groups have also reported on these general practices. 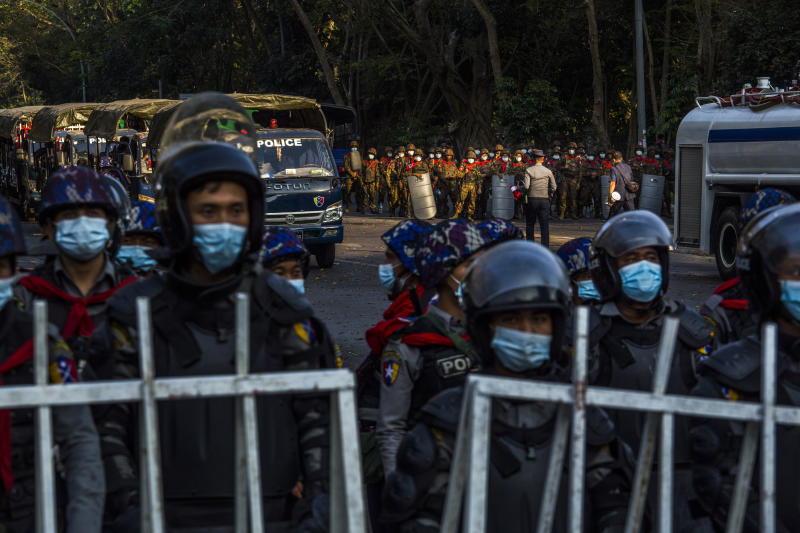 Police and military forces stand by, as tens of thousands of people gather on University Avenue Road to protest against the military's seizure of power, in Yangon, Myanmar on Tuesday.

The people who spoke with The Times detailed a pattern of abuse, in which soldiers forced civilians to serve as porters under the threat of death. Men and boys were ordered to walk ahead of the soldiers in conflict zones, often being used as human shields.

In October, Sayedul Amin, a 28-year-old Rohingya man, was fishing in a pond near his village, Lambarbill, in Rakhine state when about 100 soldiers arrived. He said they rounded up 14 men, including him, to carry sacks of rice and other food. Several who refused were badly beaten.

“We were ordered to walk in front of the soldiers,” he said. “It seems that they wanted us to shield them if anyone attacked.”

They had been walking less than an hour when shooting began, he said. He never saw who fired at them. He was hit by two bullets. A 10-year-old and an 18-year-old were killed in front of him, shot so many times in the face and head that they were hard to recognise.

The soldiers, he said, left the bodies for villagers to bury. 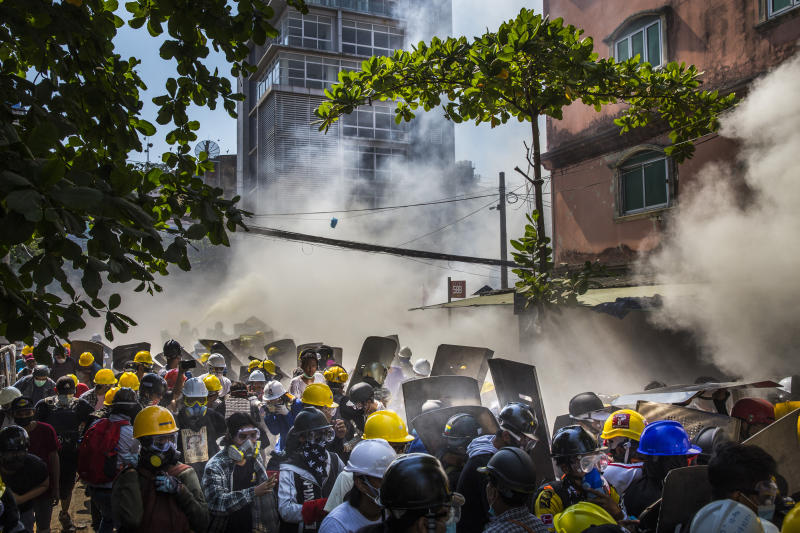 Police used tear gas, sound grenades and rubber bullets to crack down on the demonstrations in Yangon, Myanmar on Monday.

The Tatmadaw has forced at least 200 men and boys in Rakhine state to serve as battlefield porters and human shields in the past three years, according to U Than Hla, a member of the board of directors of Arakan CSO Network, a human rights coalition. Of those taken, 30 are known to have died and at least 70 are missing. Half were under 18.

Such practices have long been common in Kachin and Shan states, human rights groups say. But there is no similar data there from the same period.

Women face their own horrors. While sexual violence by the Tatmadaw often goes unreported, rape was systematic and widespread during the ethnic cleansing of the Rohingya, Human Rights Watch found. The same fate befalls women of other ethnic groups in conflict areas.

“The Myanmar military is violating human rights in many ways,” said Zaw Zaw Min, founder of the Rakhine Human Rights Group. “Women are raped, villages are burned down, property is taken and people are taken as porters.”

In June, when soldiers arrived in U Gar village in Rakhine state, Oo Htay Win, 37, said she hid in her house with her four children and newborn granddaughter. That night, the infant’s cries betrayed their presence to four soldiers, who entered the house. They gave her a choice: have sex with them or die. For the next two hours, three soldiers raped her while the fourth stood guard.

Oo Htay Win, her daughters and the baby slipped out the back door in the morning and took refuge in the city of Sittwe, where she now lives. She said her husband, who had been away, abandoned her after learning of the rape.

Though most victims of rape by soldiers stay silent, she brought criminal charges. After the soldiers confessed, they were tried, found guilty and sentenced to 20 years.

“I hate these three soldiers for destroying my life,” she said. “I have lost everything because of them.”

The convictions were a rare victory in a country where the military is seldom held accountable by civilians. And few victims receive compensation, even when they suffer permanent injuries and large financial losses. If they do, it’s minimal.

In the western part of Rakhine state, where traveling by river is common, the Tatmadaw often commandeers private boats to ferry troops and supplies. In March of 2019, U Maung Phyu Hla, 43, a boat owner from Mrauk-U Township, said soldiers forced him to take troops up the Lay Myo River to fight Arakan Army forces.

On the seventh trip upriver, they came under heavy fire. Shot in the thigh, Maung Phyu Hla said he slipped into the water and swam to a nearby village, where residents rescued him. An officer later gave him a token payment of about $350, a fraction of his losses and medical expenses.

“Who dares to complain?” he asked. “The answer is no one.”

Some villagers try to escape the conflicts, only to get caught up in violence anyway.

In March 2018, U Phoe Shan’s family and other villagers were fleeing from fighting in Kachin state in northern Myanmar. They were headed to a camp for displaced people when they encountered Tatmadaw forces on the road.

Phoe Shan, 48, said the soldiers ordered him to walk at the head of a group of about 50 troops through a forested area. Fifteen minutes into the woods, he said, he stepped on a mine. He was hospitalized for three weeks with wounds to his legs.

“If we protest, we may be shot dead,” he said. “It’s better to walk through a minefield.”

For the victims of these atrocities, life rarely returns to normal. Loved ones who have been taken never return home. Those who suffer crippling injuries find it difficult to work.

In Shan state in eastern Myanmar, U Thar Pu Ngwe, 46, who had been pressed into service, was struck in the leg by shrapnel when a soldier stepped on a mine.

He now walks with difficulty, and it takes him three times as long to go anywhere, he said. He has had to reduce the amount of land he farms, cutting his income by more than half.

“That incident changed my life,” he said. “I was a happy man but not anymore after that.”

He urged the Tatmadaw to stop using civilians in battle. “If you want to fight,” he said, “just do it on your own.”

SHANGHAI: China's central bank vowed on Friday to crack down on illegal activities of cryptocurrency trading, banning overseas exchanges from providing services to mainland investors via the internet.