A protester carrying a sword runs along a street during the military crackdown on demonstrations against the Feb 1 coup in Yangon on Tuesday. (Photo: STR/AFP)

YANGON: Plumes of smoke rose above a part of Myanmar's biggest city that has turned into a battle zone, with burning barricades and security forces firing at unarmed anti-coup protesters to enforce martial law on Wednesday.

Traumatised residents have fled the industrial neighbourhood in Rangoon that has become one of the flashpoint sites in a nationwide uprising against the military's coup nearly seven weeks ago.

The junta has increasingly deployed heavier force to quell the demonstrations, with more than 200 protesters reported to have been killed in the crackdown.

Sunday was the deadliest day since the coup, with a local monitoring group documenting more than 70 people killed -- the bulk of them in the industrial Hlaing Tharyar township in Rangoon that has become the battle zone.

Residents -- many of them migrant workers -- have since fled back to their home states, piling their belongs and families onto flat-bed trucks and the backs of motorbikes.

Those who stayed reported scenes akin to war.

"There was constant gunshots the entire night and we didn't get to sleep," one resident told AFP, adding people were worried about even walking on the streets for fear of getting targeted by security forces.

"Currently there are very few people out on the streets."

They has also erected barricades made out of tyres, wood, sandbags and bamboo poles.

Some of those barricades were burnt, leading to heavy black smoke rising above the mostly deserted streets.

Some protesters threw petrol bombs at the security forces, but otherwise appeared defenceless as they hid behind makeshift shields.

In a residential area of a neighbouring township, video footage verified by AFP showed volleys of gunfire going non-stop for roughly 15 seconds.

Information on arrests and violence have been trickling out of the conflict areas on social media -- the flow slowed due to the junta's throttling of mobile data.

Much of Myanmar has not been able to use their mobile internet since the early hours of Monday.

The country is also placed under a nightly internet shutdown for eight hours.

More than 200 people have died in anti-coup unrest, according to the Assistance Association for Political Prisoners, a local monitoring group. 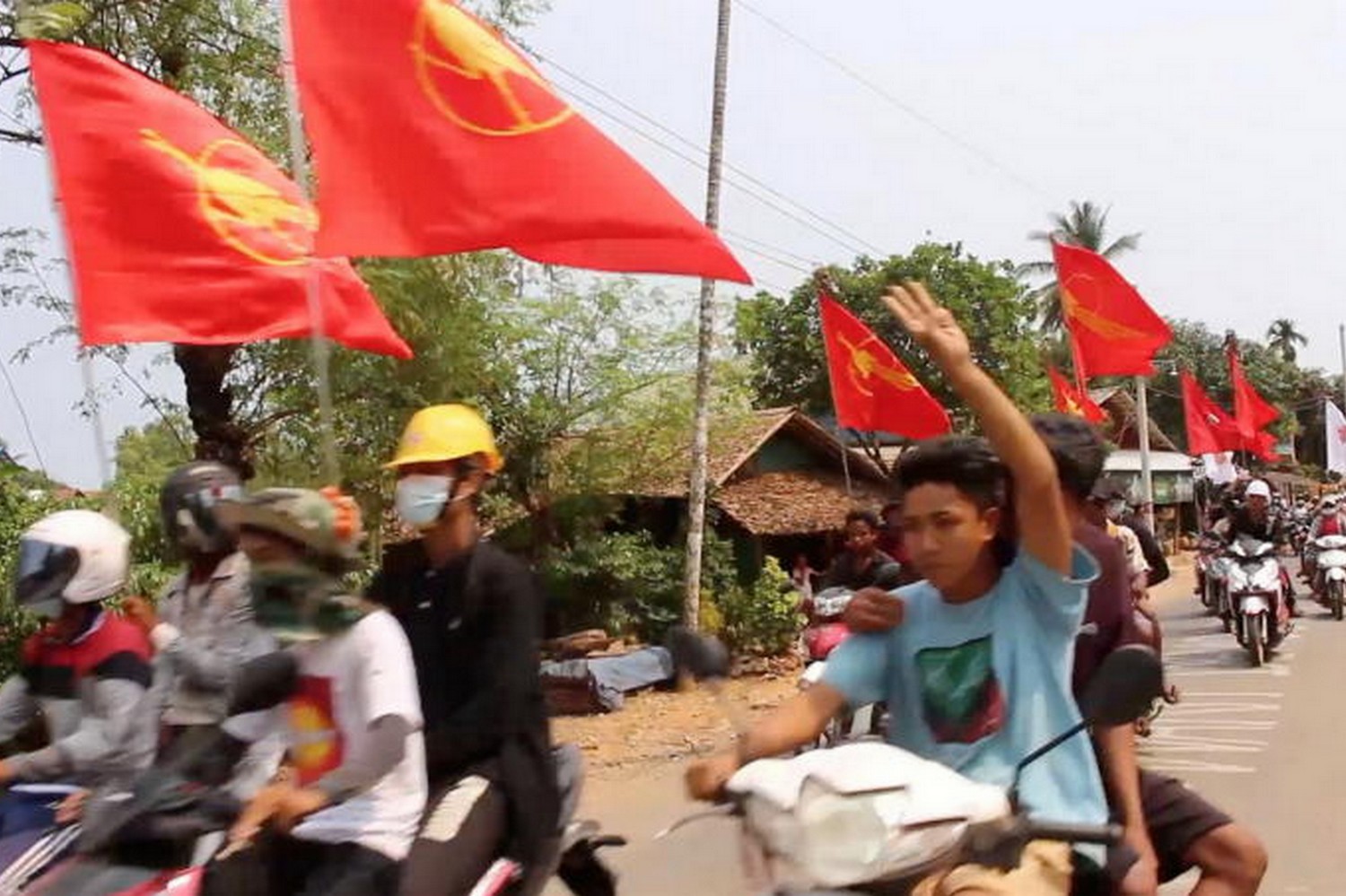 Protesters fly the flags of the National League for Democracy (NLD) as they ride their motorcycles in Dawei district, Myanmar, on Tuesday. (Still image from a video, courtesy Dawei Watch/Reuters)

The United Nations on Tuesday again condemned the deaths in Myanmar, adding that it was worried of reports of torture and deaths of those in custody.

"The death toll has soared over the past week in Myanmar, where security forces have been using lethal force increasingly aggressively against peaceful protesters," UN rights office spokeswoman Ravina Shamdasani told reporters.

"Deeply distressing reports of torture in custody have also emerged."

The office had determined that "at least five deaths in custody have occurred in recent weeks," she said, adding that "at least two victims' bodies have shown signs of severe physical abuse indicating that they were tortured."