A handout picture released on Wednesday shows a part of the Taiwan-owned MV Ever Given, a 400-metre-long and 59-metre wide vessel, lodged sideways and impeding all traffic across the waterway of Egypt's Suez Canal. (Suez Canal Authority/Handout via REUTERS)

CAIRO: A giant container ship ran aground in the Suez Canal after a gust of wind blew it off course, the vessel's operator said Wednesday, bringing marine traffic to a halt along one of the world's busiest trade routes.

A photo posted Tuesday showed the Taiwan-owned MV Ever Given, a 400-metre-long and 59-metre wide vessel, lodged sideways and impeding all traffic across the waterway as excavators struggled to free it.

"The container accidentally ran aground after a suspected gust of wind hit it," ship operator Evergreen Marine Corp told AFP.

"The company has urged the shipowner to report the cause of the incident and has been in discussions with relevant parties including the canal management authority to assist the ship as soon as possible."

Bloomberg reported it had caused a build-up of more than 100 ships seeking to transit the canal.

"There was a grounding incident," Alok Roy, fleet director of BSM Hong Kong, the Ever Given ship manager, told the news agency.

The canal, which links the Mediterranean to the Red Sea, was opened to navigation in 1869, and was expanded in 2015 to accommodate larger ships.

Shipping monitors MarineTraffic showed a map with large clusters of vessels circling at both ends of the canal, in the Mediterranean north off Port Said, and in the north of the Red Sea.

In the canal itself, the map showed at least six tug boats on either side of the stuck Ever Given.

Instagram user Julianne Cona posted a photo of the grounded ship from the Maersk Denver, now also stuck behind the Ever Given. 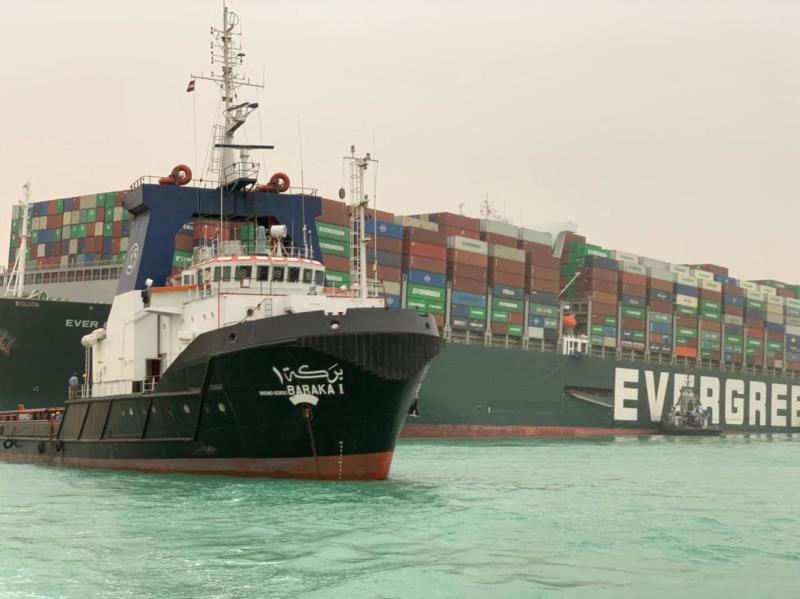 "Ship in front of us ran aground while going through the canal and is now stuck sideways," she wrote. "Looks like we might be here for a little bit."

Shipping website Vessel Finder said the ship was bound for Rotterdam in the Netherlands, and it was unclear why the vessel had stopped moving.

"Tug boats are currently trying to re-float the vessel," Leth Agencies, which provides crossing services to clients using the canal, said on Twitter.

The Suez Canal is one of the world's most important trade routes, providing passage for 10 percent of all international maritime trade.

Nearly 19,000 ships passed through it last year carrying more than one billion tonnes of cargo, according to the Suez Canal Authority (SCA).

It has been a boon for Egypt's struggling economy in recent years, with the country earning $5.61 billion in revenues from the canal in 2020.

President Abdel Fattah al-Sisi unveiled plans in 2015 for an expansion designed to reduce waiting times and double the number of ships using the canal daily by 2023.

In February, Sisi ordered his cabinet to adopt a "flexible marketing policy" for the canal in order to cope with the economic downturn caused by the coronavirus pandemic.

Egyptian authorities are yet to comment on the tanker incident.

Container ships account for more than half of the canal's total traffic, with some of them being among the largest in the world reaching a capacity of up to 23,000 TEU (twenty-foot equivalent unit).

Most of the cargo travelling from the Gulf to Western Europe is oil.

In the opposite direction, it is mostly manufactured goods and grain from Europe and North America headed to the Far East and Asia.

The journey between ports in the Gulf and London, for example, is roughly halved by going through the Suez -- compared to the alternate route via the southern tip of Africa.