At least 90 killed on Myanmar 'day of shame'
World

At least 90 killed on Myanmar 'day of shame'

A still from a video taken on Saturday shows protesters watching as smoke rises from a burning barricade during a demonstration against the military coup in Thaketa township in Yangon. (AFP Photo/Anonymous Source Via AFPTV)

Security forces killed more than 90 people across Myanmar on Saturday in one of the bloodiest days of protests since the military coup last month, news reports and witnesses said.

The lethal crackdown came on Armed Forces Day, attended by representatives of eight countries including Thailand.

At a parade in the capital Nay Pyi Taw, Senior General Min Aung Hlaing, the junta leader, said the military would protect the people and strive for democracy.

State television had warned on Friday that protesters risked being shot "in the head and back". Despite this, demonstrators against the Feb 1 coup came out on the streets of Yangon, Mandalay and other towns.

The Myanmar Now news portal said 91 people were killed across the country by security forces. The deaths, if confirmed, would bring the number of civilians reported killed since Feb 1 to around 430.

“Today is a day of shame for the armed forces,” Dr Sasa, a spokesman for CRPH, an anti-junta group set up by deposed lawmakers, told an online forum.

"They are killing us like birds or chickens, even in our homes," said Thu Ya Zaw in the central town of Myingyan, where at least two protesters were killed. "We will keep protesting regardless. … We must fight until the junta falls."

"This 76th Myanmar Armed Forces Day will stay engraved as a day of terror and dishonour," the European Union delegation to Myanmar said. "The killings of unarmed civilians, including children, are indefensible acts."

News reports said there were deaths in the central Sagaing region, Lashio in the east, in the Bago region, near Yangon, and elsewhere. A one-year-old baby was hit in the eye with a rubber bullet.

A boy reported by local media to be as young as five was among at least 13 people killed in Mandalay. Three people, including a man who plays in a local under-21 football team, were killed in a protest in the Insein district of Yangon, a neighbour told Reuters.

In the northeastern Shan state, security forces opened fire on university students — killing a least three — while in the tourist city of Bagan, a march through ancient pagodas turned into mayhem when one protesting tour guide was shot dead.

Meanwhile, one of Myanmar’s two dozen ethnic armed groups, the Karen National Union, said it had overrun an army post near the Thai border, killing 10 people — including a lieutenant colonel — and losing one of its own fighters.

The country’s ethnic armed factions will not stand by and allow more killings, the leader of one of the main armed groups said on Saturday.

A military spokesman did not respond to calls seeking comment on the killings by security forces or the insurgent attack on the Tatmadaw post.

“The army seeks to join hands with the entire nation to safeguard democracy,” the general said in a live broadcast on state television, adding that authorities also sought to protect the people and restore peace across the country.

“The democracy we desire would be an undisciplined one if they pay no respect to and violate the law,” he said. “Violent acts that affect stability and security in order to make demands are inappropriate.”

In an ominous warning on Friday evening, issued to the accompaniment of soothing piano music, a broadcast on state television declared: “You should learn from the tragedy of earlier ugly deaths that you can be in danger of getting shot to the head and back.”

The warning did not specifically say security forces had been given shoot-to-kill orders and the junta has previously suggested some fatal shootings have come from within the crowds.

But it showed the military’s determination to prevent any disruptions around Armed Forces Day, which commemorates the start of the resistance to Japanese occupation in 1945 that was orchestrated by Aung San Suu Kyi’s father, the founder of the military.

Aung San Suu Kyi, Myanmar’s most popular civilian politician, remains in detention at an undisclosed location. Many other figures in her party are also being held in custody.

In a week that saw international pressure on the junta ramped up with new US and European sanctions, Russia’s deputy defence minister Alexander Fomin met senior junta leaders a day before attending Saturday’s parade in the capital.

Support from Russia and China, which has also refrained from criticism, is important for the junta as they are permanent members of the United Nations Security Council and can block potential UN actions.

Defence ties between Russia and Myanmar have grown in recent years with Moscow providing training to thousands of soldiers as well as selling arms to the military.

Gunshots hit the US cultural centre in Yangon on Saturday, but nobody was hurt and the incident was being investigated, US embassy spokesperson Aryani Manring said. The United States has led criticism of the killings of protesters.

Protesters have taken to the streets almost daily since the coup that derailed Myanmar’s slow transition to democracy, despite the mounting toll.

“If they continue to shoot at protesters and bully the people, I think all the ethnic groups would not just stand by and do nothing.”

Author and historian Thant Myint-U wrote on Twitter: “A failed state in Myanmar has the potential to draw in all the big powers — including the US, China, India, Russia, and Japan — in a way that could lead to a serious international crisis (as well as an even greater catastrophe in Myanmar itself)”. 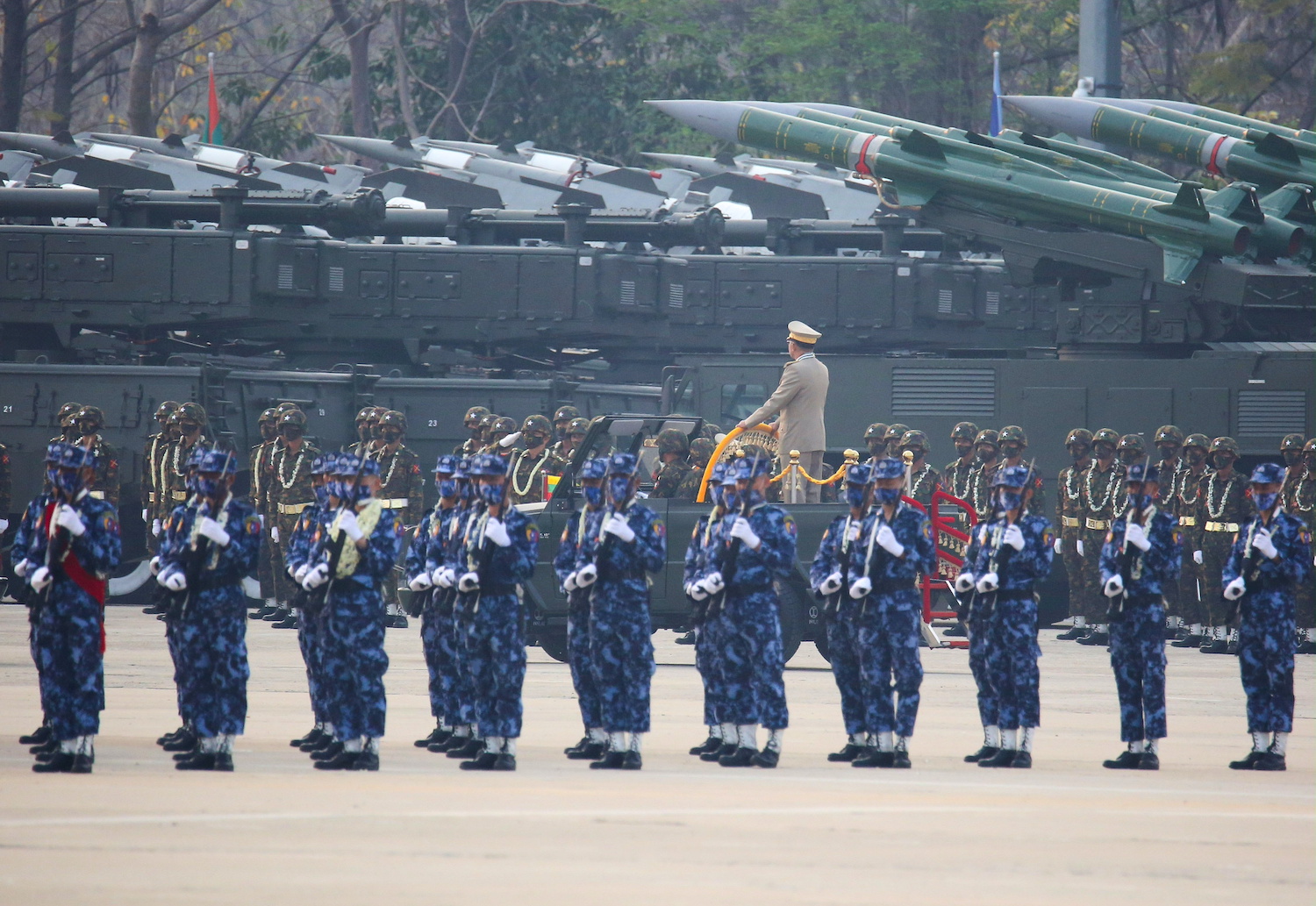 Senior General Min Aung Hlaing, who ousted the elected government in a coup on Feb 1, presides over an army parade on Armed Forces Day in Nay Pyi Taw on Saturday. (Stringer via Reuters) 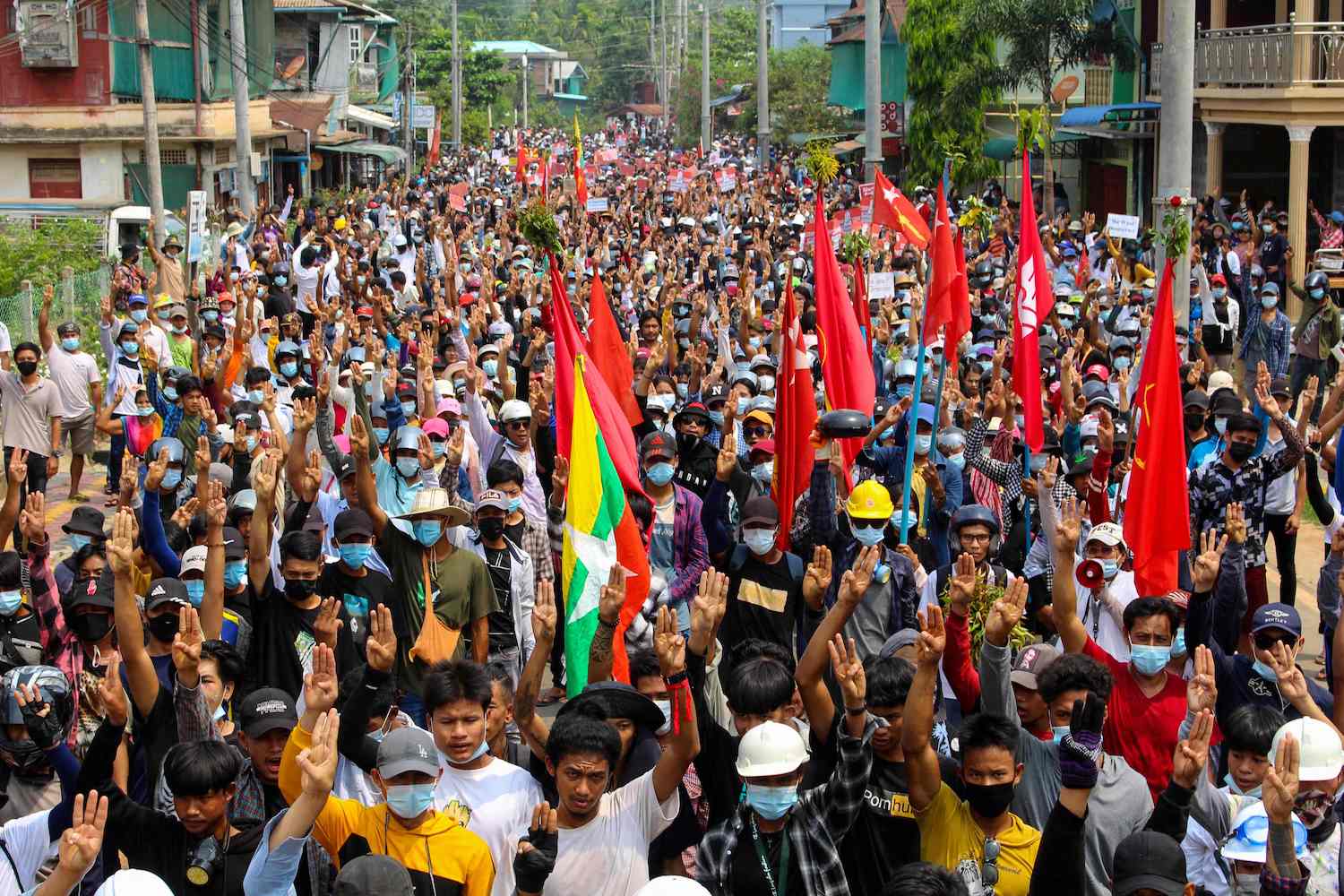 An image provided by Dawei Watch on Saturday shows hundreds of people making the three-finger salute during an anti-coup demonstration in the southern city. (Handout via AFP)