Myanmar junta chief Min Aung Hlaing (bottom right) attends a meeting of Asean leaders seeking to find a way to guide the country out of the crisis he created. (Indonesian Presidential Palace photo via AFP)

JAKARTA: Asean leaders have agreed to a five-point consensus on the crisis in Myanmar, including an immediate end to violence, according to a statement released at the end of talks held on Saturday in the Indonesian capital.

The consensus also included allowing humanitarian help in the country, releasing political prisoners and appointing a special Asean envoy for the Myanmar crisis.

Brunei, which holds the Asean chair this year, said talks among all parties concerned would “seek a peaceful solution in the interests of the people”.

The special envoy “will facilitate mediation of the dialogue process”, according to the statement posted on the Asean website.

The agreement came even as the military cracked down on anti-coup protesters on Saturday, killing at least one person in the capital Nay Pyi Taw, according to a witness.

Myanmar’s parallel National Unity Government (NUG), said it welcomed the “encouraging” news of the consensus among leaders of the 10-country bloc.

The NUG “looked forward to firm action by Asean to follow up on its decisions and to restore our democracy and freedom for our people,” Dr Sasa, its spokesman and minister of international cooperation, said in a statement.

Formed last month, the NUG includes pro-democracy figures, remnants of Aung San Suu Kyi’s ousted administration and representatives of armed ethnic groups. It says it is the legitimate authority in Myanmar but it was not invited to Saturday’s meeting.

Min Aung Hlaing, the army chief who led the Feb 1 coup, attended the talks, which were closed to the news media.

Leaders who spoke afterward expressed cautious optimism that a way forward might be found, following nearly three months of turmoil in which 740 people have been killed by security forces and at least 3,000 imprisoned.

Singapore Prime Minister Lee Hsien Loong said Min Aung Hlaing was not opposed to a visit by a delegation from Asean.

“He said he heard us, he would take the points in which he considered helpful, that he was not opposed to Asean playing a constructive role, or an Asean delegation visit, or humanitarian assistance, and that they would move forward and engage with Asean in a constructive way,” Lee said in comments reported by Channel News Asia on its website.

“We have succeeded. It’s beyond our expectation in getting the outcome from today’s meeting,” the Bernama news agency quoted him as saying.

The text of a speech delivered by Mr Muhyiddin indicated that Min Aung Hlaing heard some pointed criticism during the closed-door session.

“There is an echo of distress among Asean member states to learn, on a daily basis, what is unfolding in Myanmar,” the Malaysian premier was reported to have said. “Many around the world want an explanation and we are finding it increasingly tough to explain.”

“The deplorable situation in Myanmar must stop immediately.”

Indonesian President Joko Widodo reiterated his position that the junta must release all political prisoners if any progress toward peace is to be made.

Diplomats and government officials who asked not to be named said many Asean leaders came into the talks wanting a commitment from Min Aung Hlaing to restrain his security forces.

“This is what Myanmar must avoid: geographical, political, social and national disintegration into warring ethnic parts,” said Philippines Foreign Secretary Teddy Locsin on Twitter. “Myanmar on its own must find peace again.”

Small protests outside the Asean Secretariat headquarters in Jakarta were dispersed by security personnel. (story continues below) 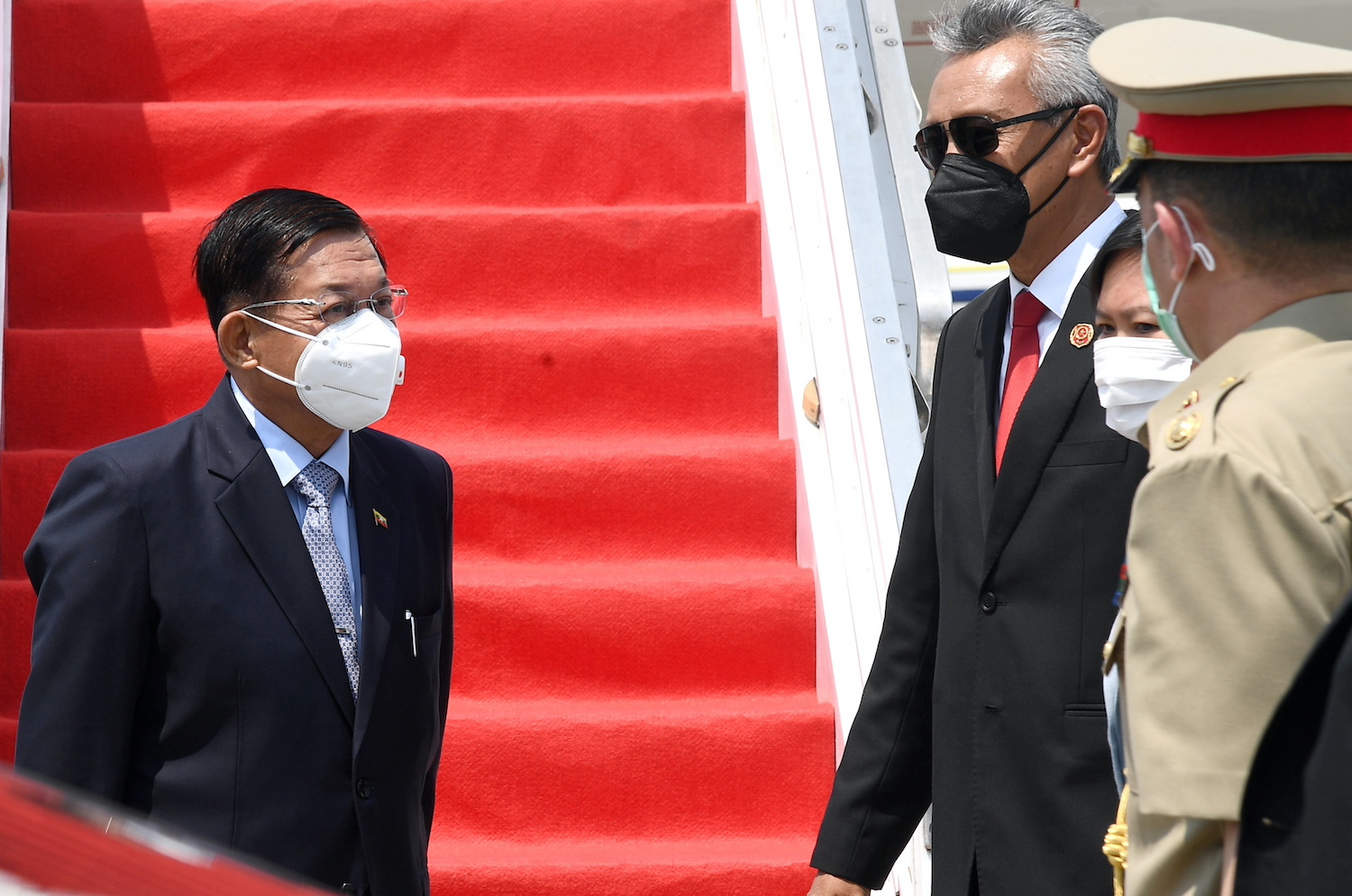 “Meetings that contribute to a solution to the deepening crisis in Myanmar are welcome,” the latter said in a statement released earlier on Saturday.

“(But) meetings that exclude the people of Myanmar but include murderer-in-chief Min Aung Hlaing … are unlikely to be helpful.”

The lawmakers called on the junta to “stop murdering civilians”, release more than 3,000 political prisoners and return power to the country’s democratically elected government.

“The crisis initiated by a murderous and unrepentant Myanmar military has engulfed the country, and will cause severe aftershocks — humanitarian and more — for the entire region,” the rights group Amnesty International said ahead of the meeting.

Asean leaders said they had agreed on a plan with Myanmar's junta chief on Saturday to end the crisis in the violence-hit nation, but he did not explicitly respond to demands to halt the killing of civilian protesters. (Reuters video)

“The Indonesian authorities are duty-bound to investigate Senior General Min Aung Hlaing and other Myanmar military officials who may join his delegation to Jakarta.”

Few analysts were expecting major breakthroughs from the meeting, saying instead it represented a chance to bring Myanmar’s military to the table and pave the way for a possible resolution.

“We have to be realistic here. I don’t think the summit is going to bear out a full-blown plan on how to get Myanmar out of the conflict,” said Mustafa Izzuddin, senior international affairs analyst at Solaris Strategies Singapore.

“But rather I think it will start the conversation and perhaps lay the parameters as to how a resolution could be found.”