People queue outside a bank to withdraw cash in Yangon on Thursday. (Reuters Photo)

If you need cash in Myanmar, you have to get up early. Queues start forming outside banks at 4am, where the first 15 or 30 customers are given a plastic token that will allow them to enter the bank when it opens at 9:30 and withdraw cash.

If you don’t get a token, you either have to queue for hours for the few functioning cash dispensing machines outside or go to black-market brokers who charge big commissions, according to more than a dozen people who spoke to Reuters.

The cash crisis is one of the most pressing problems for the people of Myanmar after the Feb 1 military coup. The central bank, now run by a junta appointee, has not returned some of the reserves it holds for private banks, without giving any reason, leaving the banks short of cash.

The banks themselves have been closed or open only intermittently as many staff have gone on strike to protest against the coup. Meanwhile, internet outages make online transactions difficult and international transfers have largely stopped working.

That presents problems for local residents and small businesses as they try to navigate an economy rapidly crumbling under the country’s new leaders and the collapse of tourism. The Burmese kyat has dropped some 20% in value since the coup.

“It’s now very difficult to operate a business,” said Hnin Hnin, an entrepreneur in her mid-20s who supplies shampoo and bedsheets to high-end hotels. “Traders don’t accept bank transfers now. They want cash. So we need to find the cash.”

As a result, Hnin Hnin, who agreed to be identified only by a part of her name to discuss sensitive matters, has been one of the thousands of people queuing daily in front of the few functioning cash machines in major cities. Some people band together in groups of five, she said, so one person can take out money for the whole group.

She has also been forced to figure out ways to pay her suppliers overseas, by making an agreement to swap money with a partner holding cash in an account in Thailand. Under the agreement, the partner gives Hnin Hnin access to her Thai baht account, so she can pay suppliers in Thailand, and Hnin Hnin pays her back with physical kyat notes in Myanmar.

The central bank and the junta did not respond to requests for comment. Reuters put questions to Myanmar’s four largest private banks, including Kanbawza Bank and CB Bank. They also declined to respond.

It is now almost impossible to get hold of US dollars or other overseas currency at regular exchange centres in Yangon, a dozen people told Reuters. Black-market traders will take online transfers in exchange for physical notes in various currencies, they said, but add a commission of up to 10%.

Myanmar’s private banks were in trouble long before this year’s coup, at least partly because of their habit of lending money to well-connected customers who rarely bothered to pay them back, at least four bankers, including then-deputy central bank governor, told Reuters in 2017.

The coup and the protests against it now mean there is no functional banking system, according to Richard Horsey, an independent political analyst specialising in Myanmar.

“You have a three-pronged hit to the banking system,” said Horsey. “The pre-existing problems with the banks, which will be all the more difficult to resolve now; you have the economic impact of the coup which has produced a virtual hard stop to the economy without any kind of ability by the regime to manage that or inject stimulus; and then you have the banking sector strike itself.”

People want to withdraw cash now to buy food and other essentials, said Horsey, and also because they fear the banking system will collapse.

The cash crisis is the most immediate sign of much deeper economic problems facing Myanmar, some experts said.

The United Nations Development Programme said last month that Myanmar faces economic collapse due to the combined effect of the new coronavirus and the coup, which in its worst-case analysis could put nearly half the country’s 54 million people into poverty, compared to about a quarter in 2017.

“If the situation on the ground persists, the poverty rate could double by the beginning of 2022,” said UNDP in its report. “By then, the shock from the crisis will have resulted in significant losses of wages and income, particularly from small businesses, and a drop in access to food, basic services and social protection.”

Millions are expected to go hungry in the coming months, the United Nations’ World Food Programme said in an analysis published in April.

Some workers have trickled back to resume their jobs at banks in the past few weeks, but financial analysts see no immediate alleviation of the cash shortage.

In Yangon, the country’s commercial capital, an egg and cooking oil trader who identified herself as Khin told Reuters the flow of eggs, oil and other agricultural commodities had slowed substantially and was no longer sufficient, forcing her to raise prices by 25%.

While groceries are available in markets and in shops, some country analysts said they worry that farmers will not have access to seeds or credit to buy them before the monsoon planting season around June.

“Farming in rural areas has already slowed down and the impact will be huge in the next season,” said Khin. “Beans suppliers and chicken farm owners aren’t sure if they can start another cycle.”

The commercial chain has been grinding to a halt, a major rice trader who works with hundreds of Myanmar farmers told Reuters. That trader said he lacks the cash to buy rice from farmers, which means in turn the farmers do not have money to buy equipment or pay workers to produce the rice.

Many of the private banks’ loans were collateralised against real estate in Yangon, where property prices have collapsed since the coup, according to local economic analysts.

Private banks in Myanmar are required to deposit a certain percentage of their customers’ money with the central bank, as a way of protecting savings. Two bankers told Reuters their banks had deposited more than is required, but were denied permission by the central bank to withdraw any surplus, leaving them short of cash to dispense to customers.

A banker at a major Myanmar bank said the closure of branches in the first two months after the coup prevented a run on the banking system with a rush to withdraw savings. “It was a good thing that the branches haven’t been open,” said the executive. “If the branches were open, we wouldn’t have enough cash to pay out.” 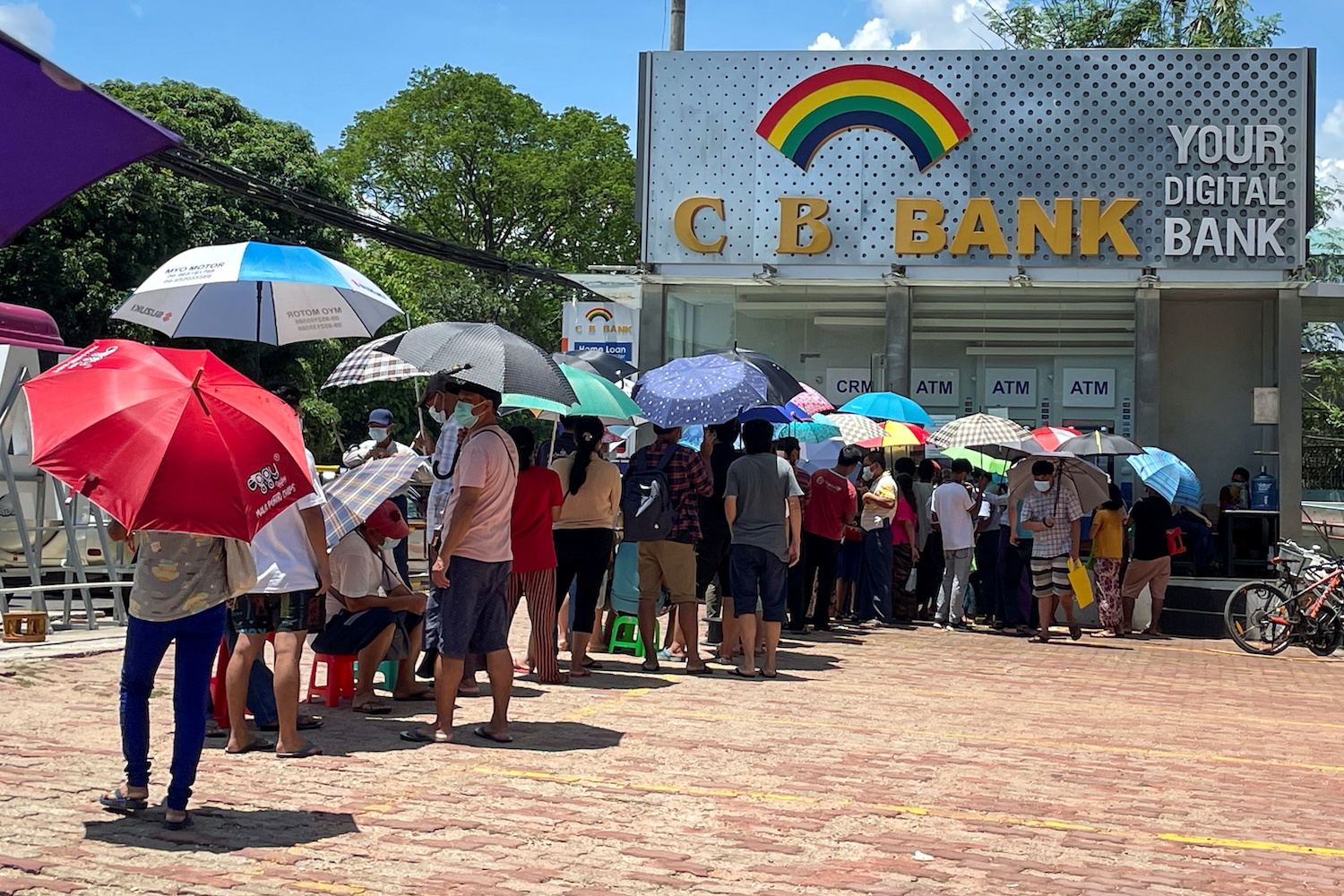 Queues start forming as early as 4am at some banks. (Reuters Photo)