'Apple Daily' may be shut on Wednesday
World

Copies of Next Digital's Apple Daily newspapers are seen at a newsstand in Hong Kong on May 17. (Reuters photo)

Earlier, an adviser to jailed owner Jimmy Lai told Reuters it would forced to shut "in a matter of days" after authorities froze the company's assets under a national security law,

The closure of Apple Daily would undermine the former British colony's reputation as an open and free society and send a warning to other companies that could be accused of colluding with a foreign country, media advocacy groups said.

Next Digital, publisher of the top-selling 26-year-old newspaper, would hold a board meeting on Monday to discuss how to move forward after its lines of credit were frozen, the adviser, Mark Simon, said.

"We thought we'd be able to make it to the end of the month. It's just getting harder and harder. It's essentially a matter of days," he told Reuters by telephone from the United States.

Vendors had tried to put money into the company's bank accounts but had been rejected, he said.

The newspaper would stop publication on June 26 if a board meeting on Friday decided to stop operations, an internal memo seen by Reuters showed.

Apple Daily management could not be reached for comment on Monday.

The newspaper said on Sunday the freezing of its assets had left it with cash for "a few weeks" for normal operations.

Chief editor Ryan Law, 47, and chief executive Cheung Kim-hung, 59, were denied bail on Saturday after being charged with collusion with a foreign country.

Three other executives were arrested on Thursday when 500 police officers raided the newspaper's offices, drawing condemnation from Western countries, global rights groups and the UN spokesperson for human rights.

Those three are still under investigation but were released from police detention.

Hong Kong officials have repeatedly said that media freedom and other rights will remain intact but national security is a red line.

Security Secretary John Lee told a news conference on Thursday the police operation against the Apple Daily was aimed at those who use reporting as a "tool" to endanger national security and did not target the media industry as a whole.

China's Foreign Commissioner's Office said in a statement on Thursday the national security law protected press freedom and warned "external forces" to "keep their hands off Hong Kong". The office said press freedom cannot be used as a "shield" for those who commit crimes. 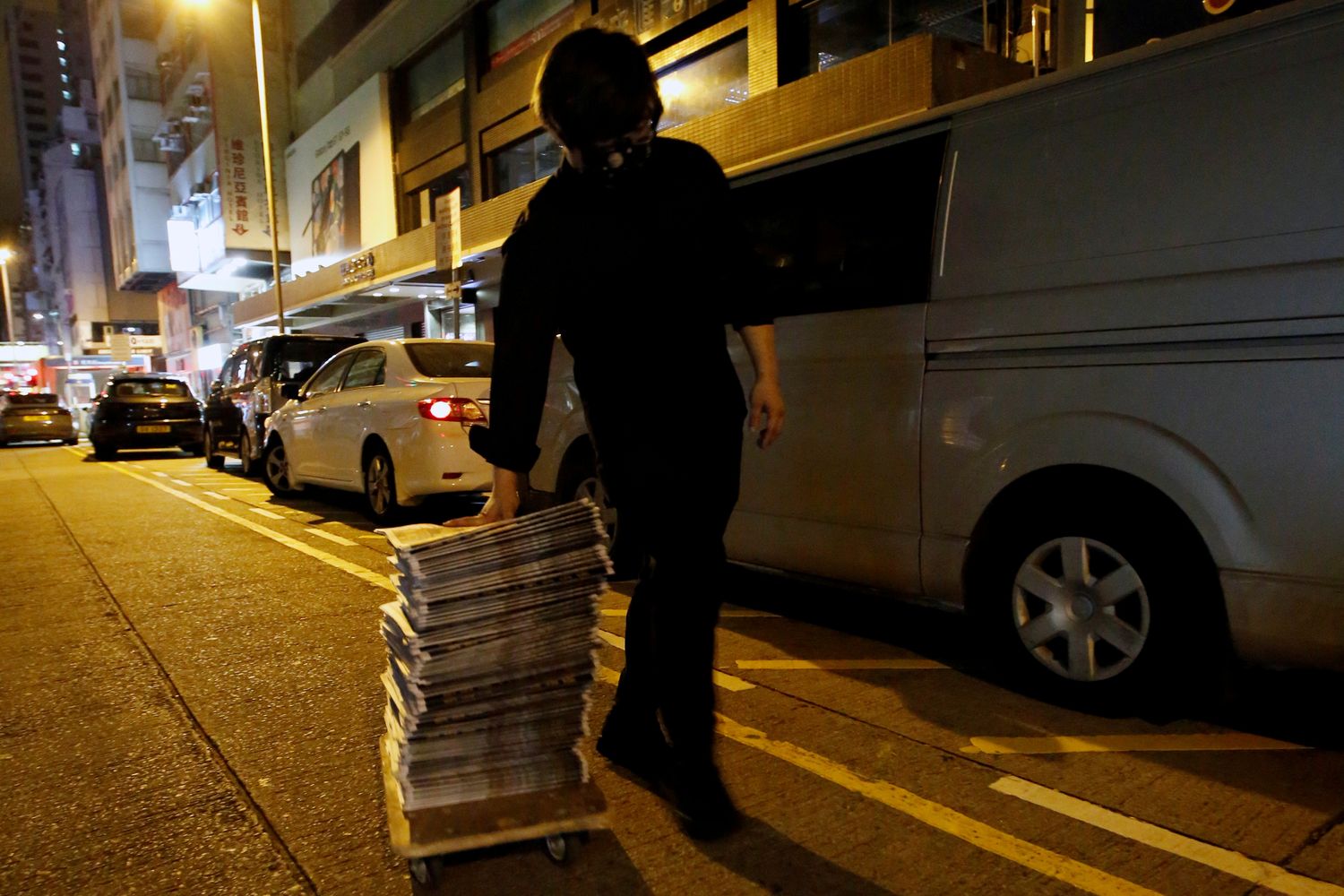 A supporter of Apple Daily newspaper wheels a stack of the June 18 edition he purchased from a newspaper seller, after police raided the newspaper's newsroom and arrested five executives the day before, in Hong Kong early on Friday. (Reuters photo)

In May, Reuters reported exclusively that Hong Kong's security chief had sent letters to tycoon Lai and branches of HSBC and Citibank threatening up to seven years' jail for any dealings with the billionaire's accounts in the city.

A Hong Kong-based spokesperson for Citibank said at the time the bank did not comment on individual client accounts. HSBC declined to comment.

Authorities are also prosecuting three companies related to Apple Daily for alleged collusion with a foreign country and have frozen HK$18 million ($2.3 million) of their assets.

Simon told Reuters it had now become impossible to conduct banking operations in the global financial hub as authorities had "criminalised" any activities with the company's accounts.

"We can't bank. Some vendors tried to do that as a favour ... and it was rejected."

Reuters could not determine the banks where Apple Daily vendors had tried to deposit funds only to have their transactions rejected.

Apple Daily said on Sunday it planned to ask the government's Security Bureau to unfreeze the assets of the three companies. If that did not work, it may challenge the decision in court, it said.

The paper has come under increasing pressure since owner and Beijing critic Lai, who is now in jail, was arrested under the national security law last August and has since had some of his assets frozen.

A source with direct knowledge of the board's discussions said an application had been made to the Security Bureau to ask Hong Kong security chief John Lee to unfreeze the assets to allow essential payments to staff and suppliers.

The company has about 600 journalists, according to Simon.

"Our staff are now just worried about personal safety," he said.

Police have said dozens of Apple Daily articles were suspected of violating the national security law, the first case in which authorities have cited media articles as potentially violating the legislation.

Simon and the source said their understanding was that about 100 articles were under scrutiny.

"After all this is said and done, the business community is going to look up and recognise that a man's company was gutted and stolen by a communist regime in Hong Kong," he said.

NAKHON RATCHASIMA: A construction camp in the Nava Nakorn Industrial Promotion Zone in Sung Noen district has been ordered sealed off for one month after 90 workers there were found to have Covid-19.

NAKHON RATCHASIMA: A couple dumped an 80-year-old man they called "father" at a temple in Bua Lai district and drove off, and he was later confirmed to be infected with Covid-19.

US, China leave room to talk after contentious meetings