Sealand: the 'micronation' defying the UK and Covid
World

Sealand: a hulking metal-and-concrete platform in the North Sea that has been run as an independent micronation in defiance of the UK government for the last 54 years.

"We have zero Covid cases," Liam Bates, one of the self-declared "princes" of Sealand, declares proudly.

"At the moment I think we're one of the only countries in the world that can actually say that," he told AFP.

Sealand, a former anti-aircraft platform built atop two hollow concrete towers, had been due to be demolished after World War II since it was outside UK waters. When that did not happen, Bates' grandfather, Roy, a businessman with ventures in fishing and pirate radio, took over and declared independence.

The Principality of Sealand -- motto "E Mare Libertas" (From the Sea, Freedom) -- was born in 1967, with its own constitution, a national flag and even a national anthem.

Since then the windswept former fortification has survived an attempted "coup", a collapsed data storage venture and a catastrophic fire.

With its black-red-and-white flag flying, Sealand still has a piratical air.

Engineer Joe Hamill, 58, winches up visitors in a wooden swing, as they tightly grip the ropes.

On board, the first formality is a Sealand passport stamp. Close up, Sealand looks reassuringly shipshape with new decking and neatly stored tools, paints and tins of hot dogs.

The kitchen has pot plants and china plates while the rooms are decorated with wallpaper, rugs and classic books, including Thomas Hardy's "Far From the Madding Crowd".(continues below) 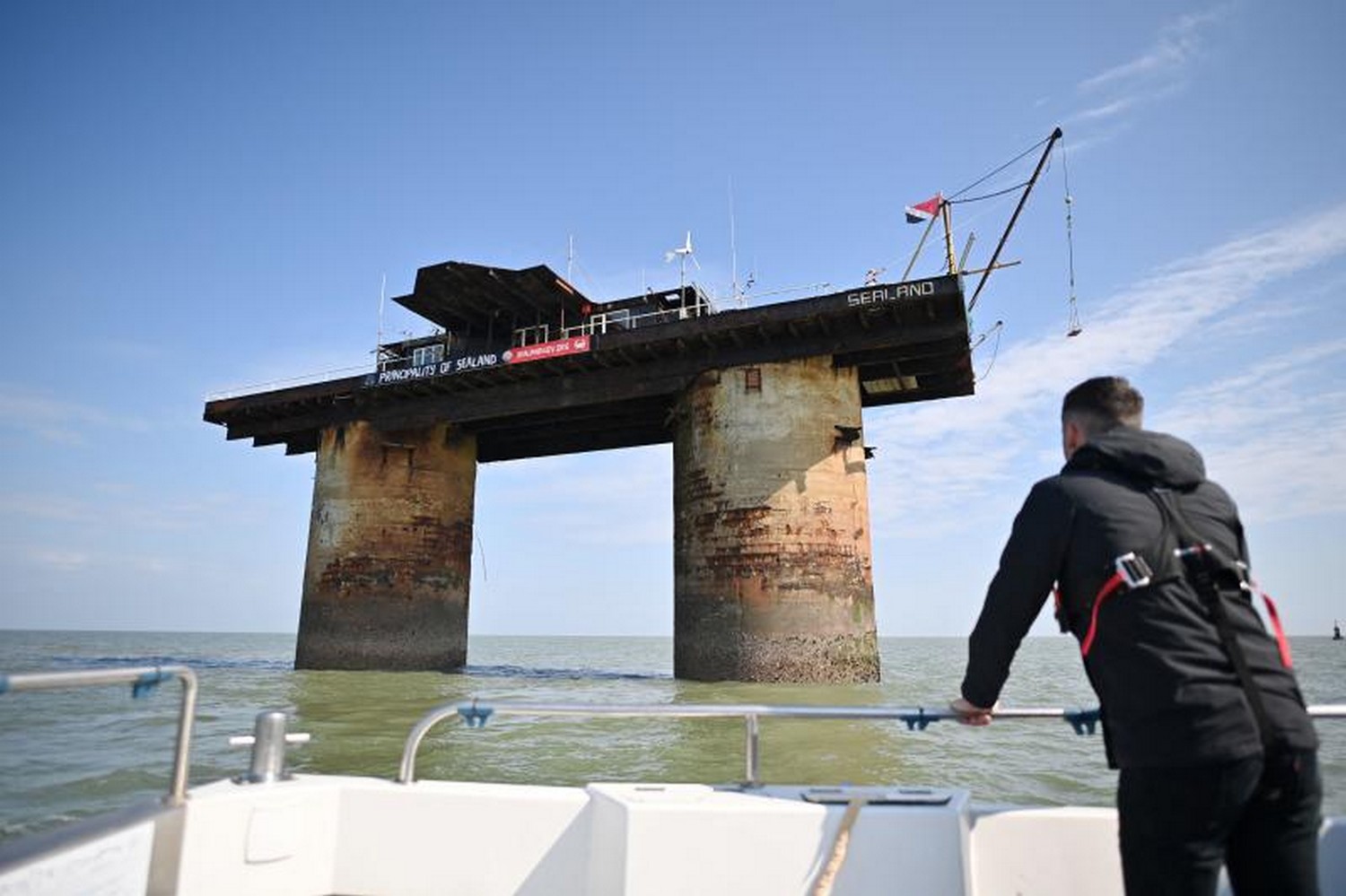 Prince Liam Bates looks towards the Principality of Sealand, about 11 kilometres off the coast of southeast England. (AFP)

Liam, now 33, has been visiting since he was three and springs onto the swing seat with practised ease. He focuses on the day-to-day operations, while his elder brother, James, runs the family's cockle fishing and canning business.

Their father, Prince Michael, is recovering from surgery and "slowing down a bit," he says. Since he has an American fiancee and an elder brother, Liam jokes that he is Sealand's "Prince Harry".

Sealand does not pay UK tax and the "whole point... is freedom of whatever you want, really: like religion, expression, any kind of orientations," he added.

While the Bates only visit, the platform is maintained by two men on two-week shifts: Hamill and 66-year-old Michael Barrington, head of homeland security. During lockdown, Hamill said he volunteered to spend two 11-week periods here on his own, winching up supplies from a boat.

By the end, "I think my mental state was actually going a bit", says the Londoner, who used to work in insurance. "It was pure isolation." (continues below) 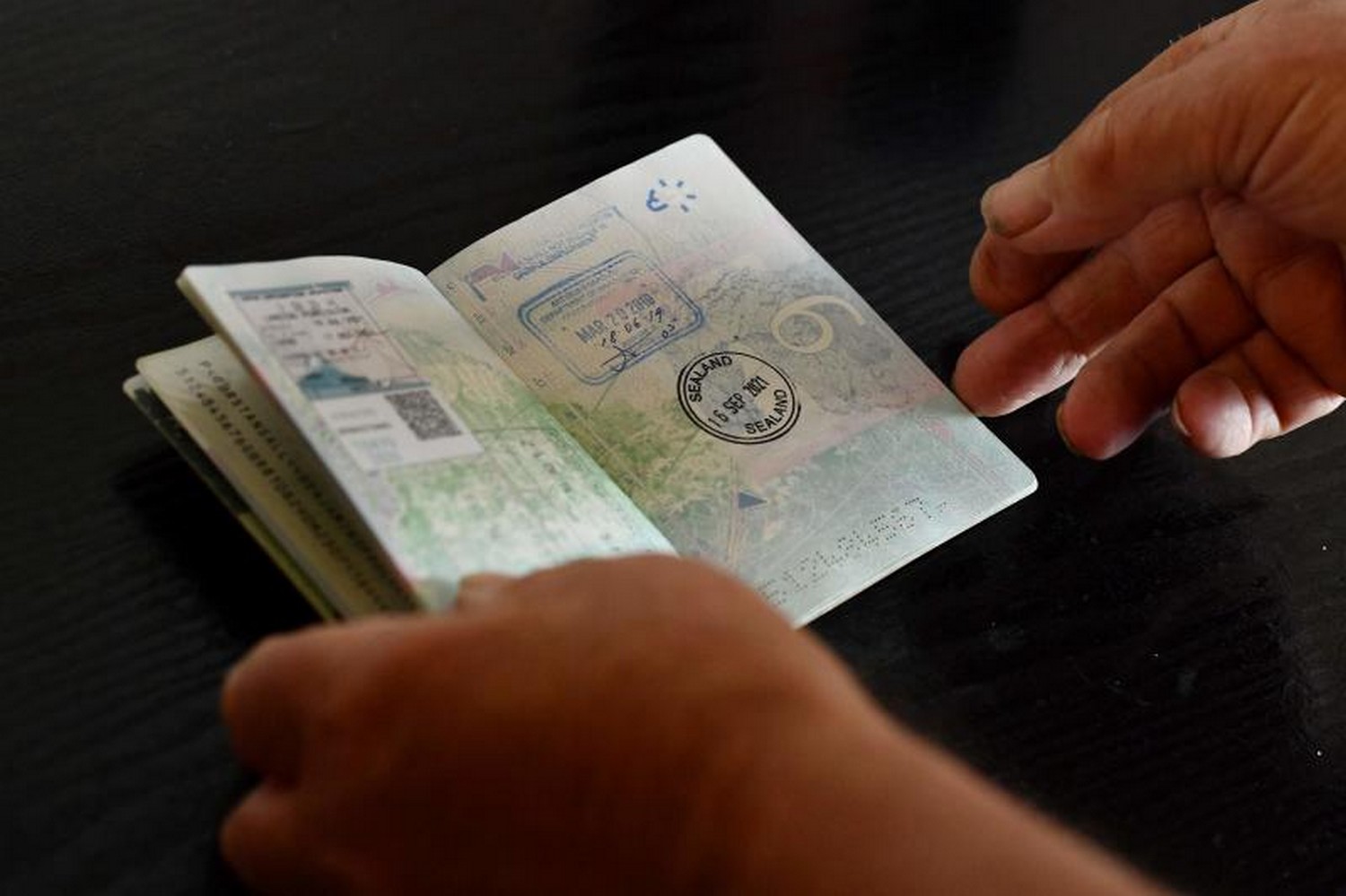 Chief Engineer and Head of Homeland Security Michael Barington stamps the passport of a visitor to the Principality of Sealand on Sept 16.

At least Sealand is far more comfortable than in its early days, the men say. Wind turbines and solar panels have replaced the old diesel generators, one of which caught fire in 2012, causing extensive damage.

Rooms inside the concrete towers include a multi-faith chapel, a recreation room with a pool table and gym equipment and a meeting room with a whiteboard. Some are below the waterline and there is a constant sound of sloshing water. Barrington, who first came to Sealand 33 years ago after working on pirate radio stations, calls it "a big man cave".

There's little trace of Sealand's WWII origins, beyond a painted sign about pumps. Liam Bates said that most was ripped out in the early 2000s, when US entrepreneurs tried to set up a data haven in the towers. It became "a victim of the dot.com bubble," he says, while servers remain in one room "as part of our national history".

He still sees the future of Sealand as digital, with plans to launch a cryptocurrency, though he gives few details.

A small prison cell with an iron bedstead once housed the state's only prisoner in 1978 during "the great coup of Sealand". After a dispute with Roy Bates, a German businessman sent mercenaries to storm the platform while he was away.

Roy Bates and his son Michael recaptured Sealand in a dawn raid in a helicopter and released the mercenaries but held the businessman's lawyer, accusing him of treason. He was eventually freed after a German diplomat came out to investigate

This is not the only violent episode in Sealand history: in 1967 the Bates fought off a boarding party from Radio Caroline, a popular pirate radio station, throwing down Molotov cocktails.

In 1968 Roy and his son Michael were tried for weapons offences after firing on passing ships, but the court ruled the fort was outside British jurisdiction.

"My dad (Michael) taught us to fire guns and all that sort of stuff," says Liam, who is cagey about whether there are weapons on board now. "We're equipped to protect ourselves because obviously we've been attacked in the past," he says.

Since 1987, the platform has been legally in British waters, although the UK is not actively trying to claim it back.

"I think they like to pretend we don't exist, and just hope that one day we'll pack up and leave," said Liam. "Which of course is never going to happen".