A photo posted on Facebook by Viliami Uasike Latu, Tonga’s Minister for Trade and Economic Development, shows destruction along the western beaches of Tonga’s main island of Tongatapu, following the eruption of the Hunga Tonga-Hunga Ha’apai volcano on a Jan 15. (Courtesy of Viliami Uasike Latu via AFP)

The government said drinking water was the priority, and a national emergency team had already distributed 60,000 litres of water to residents. A desalination plant on a New Zealand naval ship that arrived on Friday, capable of producing 70,000 litres a day, has started drawing seawater from Tonga’s harbour.

Residents who had lost homes on outlying islands when a tsunami reaching up to 15 metres crashed over the South Pacific archipelago would be relocated to the main island, Tongatapu, because of water and food shortages, the Tongan prime minister’s office said in a statement distributed to Tongan officials.

Volcanic fallout on the surface of the ocean was damaging boats and making marine transport between the islands challenging, and domestic flights were suspended, it said.

Ash fall and the tsunami had affected 84% of the population, and inter-island communications remain an “acute challenge” with limited satellite and radio links, it said.

Burials were held earlier in the week for a Tongan man and a woman who had died when the tsunami hit the outlying Ha’apai islands. The official death toll is three. A field hospital has been set up on Nomuka Island after the health centre there was swept away.

Faka’iloatonga Taumoefolau, the coordinator for the project to rebuild Tonga’s parliament, said the restoration of international money transfer services, for limited hours on Saturday, was important for people to be able to buy essential goods.

“Tongans have demonstrated their resilience in this calamity and will get back on their feet,” he said, speaking to Reuters from Tongatapu.

More naval vessels from Australia, New Zealand and Britain are en-route to Tonga to deliver aid. Two aid flights, from Japan and New Zealand, arrived on Saturday with humanitarian supplies, after two flights from Australia on Friday evening.

The Tongan government has implemented a strict Covid-19 policy that means people, including aid workers, cannot enter the country unless they have undergone a three-week isolation period. Over the past two years the country has reported only one Covid-19 case and no deaths.

Aid deliveries have been contactless, with pallets quarantined for 72 hours after arrival at the airport before being distributed by Tongan authorities. One Australian aircraft returned to Brisbane midflight on Thursday after being notified of a Covid-19 case among the crew.

An aid delivery expected from China would also be contact-less to prevent the spread of Covid-19, the government said.

Taumoefolau said Tonga had done a good job in avoiding a pandemic outbreak, recording only one case so far, and the border policy would not hinder aid reaching communities.

“It is doable to get the aid in without compromising efforts on keeping Covid out,” he said.

An Australian navy vessel, HMAS Adelaide, was expected to arrive in Tonga on Wednesday with more bulk water and a 40-bed field hospital, Australia’s minister for international development and the Pacific, Zed Seselja, told reporters in Canberra on Saturday.

The Tongan government was doing “an extraordinary job on the ground”, he said.

Australia and New Zealand were coordinating an international aid effort with support from Britain, France, the United States, Fiji and Papua New Guinea, he said, and the Tongan government had asked for support to be paced so the small airport was not overwhelmed.

Asked by reporters about China’s aid programme in the Pacific, Seselja said: “We welcome offers of support from anyone, including the Chinese government”. (story continues below) 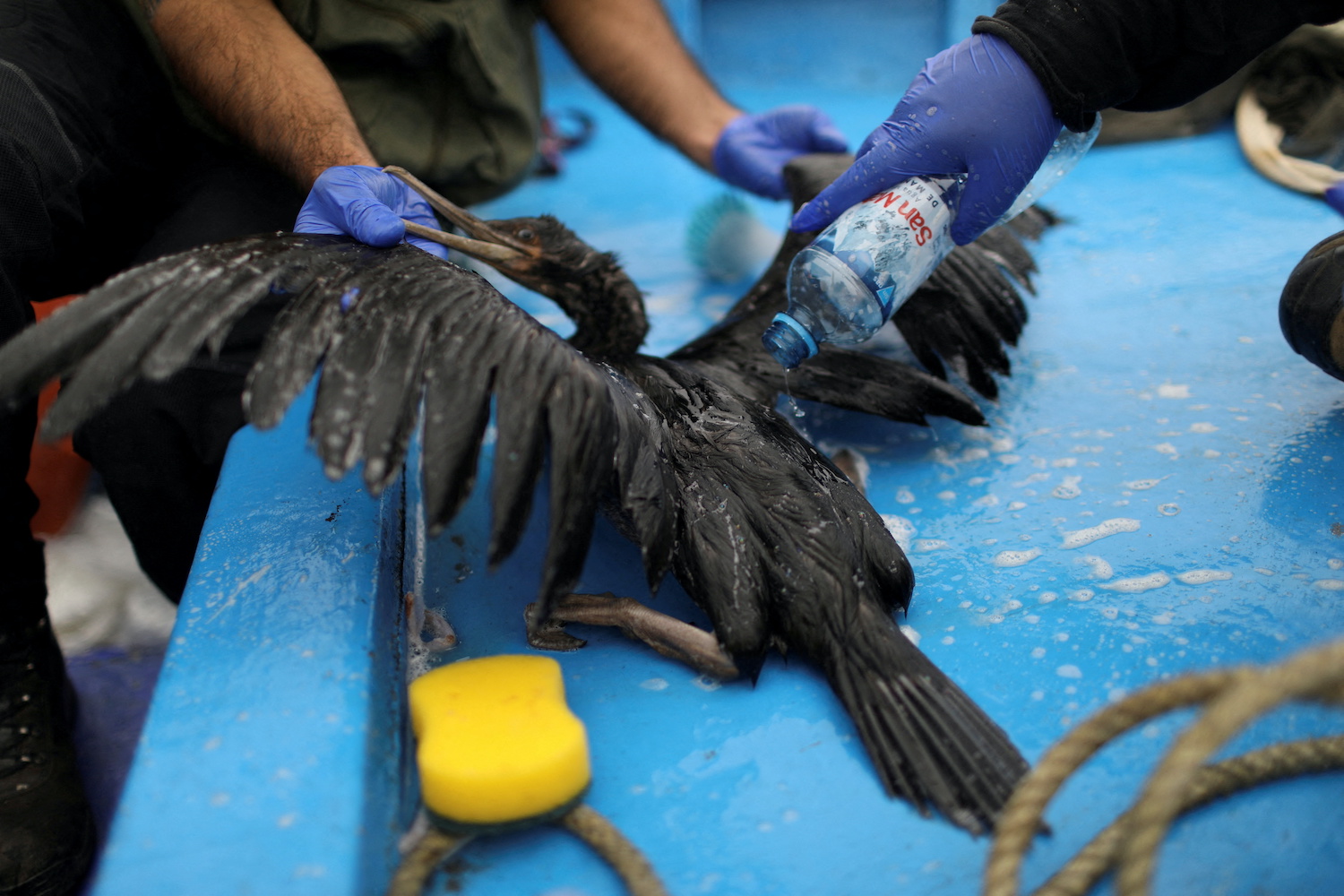 Biologists in Ancon, Peru work on a bird affected by an oil spill caused by abnormal waves triggered by the massive underwater volcanic eruption thousands of kilometers away in Tonga. (Reuters Photo)

Sione Hufanga, the resident United Nations country coordination specialist, told Reuters that the agency is assisting the government in relief work as more people arrive at shelters and seek food and other supplies.

“Almost all crops in the country have been badly affected. Farmers have lost their homes and livelihood,” he told Reuters by phone from Tonga’s capital, Nuku’alofa. “The country will be heavily relying on aid food for some time.”

The agricultural sector contributed nearly 14% of Tonga’s GDP in 2015-16 and represented over 65% of exports.

An estimated one cubic kilometre of material blasted from the volcano, and experts expect Hunga Tonga-Hunga Ha’apai to remain active “for weeks to months”.

“Tonga’s people are going to need sustained support responding to a disaster of this scale,” Hufanga said.

“The people of Tonga are still overwhelmed with the magnitude of the disaster.”

The government said it was “deeply appreciative to the international community” for its assistance, which included US$8 million in funding from the World Bank and US$10 million from the Asia Development Bank.

Reliance, a repair ship due to reconnect the undersea cable that links Tonga to international telecoms networks, left its Port Moresby mooring and was expected in Tonga on Jan 30, according to Refinitiv data on shipping movements.

The vessel was expected to arrive “in the next few days” to repair the fibre-optic cable, the Tongan government said.

In the meantime, some communications have been established, although the mobile network provider Digicel said the high number of calls to the island was producing delays.