An image obtained from social media shows a fire after shelling at a residential area in Mariupol on Thursday. A major evacuation of the port city of 450,000 began on Saturday morning. (Twitter @AyBurlachenko via Reuters)

Officials in the Ukrainian port city of Mariupol, surrounded by Russian forces, on Saturday delayed an evacuation of the civilian population, accusing Moscow’s troops of breaking a ceasefire.

“Due to the fact that the Russian side does not adhere to the ceasefire and has continued shelling both of Mariupol itself and its environs and for security reasons, the evacuation of the civilian population has been postponed,” city officials said in a statement on social media.

Authorities in Mariupol, a city of about 450,000 people on the Azov Sea, were scheduled to begin the evacuations at 0900 GMT (4pm Thailand time), after Russian forces agreed on a ceasefire to set up a “humanitarian corridor” to allow civilians to leave the fighting.

The Red Cross was to guarantee the temporary ceasefire, with as many as 200,000 people expected to leave the besieged city over the next few days.

“We ask all Mariupol residents to disperse and head to places where they can shelter. More information about the evacuation will be posted soon,” municipal officials wrote on Saturday afternoon.

“At the moment, negotiations are under way with Russia to establish a ceasefire and ensure a safe humanitarian corridor.”

The Russian defence ministry later accused Ukrainian nationalists in Mariupol and Volnovakha — a town of 20,000 people near the rebel centre of Donetsk — of blocking Ukrainians from leaving toward Russia.

It also said it had respected the ceasefire and accused Ukrainian forces of shoring up defences during the halt in fighting.

The ministry said the location of the humanitarian corridors and exit points had been determined in agreement with Ukrainian authorities, according to Russian news agencies.

Mariupol Mayor Vadim Boychenko said on Saturday that his city was under “blockade”. Pro-Russian separatist forces and the Russian military said the town was surrounded.

The capture of Mariupol, a port city of 450,000 people on the Azov Sea, could enable Russian troops coming from annexed Crimea to connect with the forces of separatist-controlled Donbas.

The ceasefire announcement came as Moscow sought to gain control of the narrative about the invasion, even as it steps up military pressure on a number of Ukrainian cities.

Russia on Friday blocked Facebook and some other websites and passed a law that gives authorities much stronger powers to crack down on independent journalism as it seeks to silence criticism of its invasion.

The latest move by Moscow has prompted the BBC, Bloomberg and some other foreign media to suspend reporting inside the country.

Moscow’s attack on Ukraine, the biggest on a European state since World War II, has created over 1.2 million refugees, led to a barrage of sanctions and fears of a global economic hit and wider conflict in the West unthought-of for decades.

Fighting was raging in Ukraine as Russian troops besieged and bombarded cities in the second week of an invasion that has isolated Moscow, which calls its attack is a “special operation” to capture individuals it regards as dangerous nationalists.

Kyiv, in the path of a Russian armoured column that has been stalled outside the Ukrainian capital for days, came under renewed assault, with explosions audible from the city centre. Europe’s biggest nuclear power plant had also been seized.

President Vladimir Putin’s actions have drawn almost universal condemnation and many countries have imposed heavy sanctions as the West balances punishment with avoiding a widening of the conflict.

Fighting back in the information war, Russia’s parliament passed a law imposing a prison term of up to 15 years for spreading intentionally “fake” news about the military.

“This law will force punishment — and very tough punishment — on those who lied and made statements which discredited our armed forces,” said Vyacheslav Volodin, the chairman of the Duma, Russia’s lower house of parliament.

Russia is blocking Facebook for restricting state-backed channels, as well as the websites of the BBC, Deutsche Welle and Voice of America.

The BBC, Bloomberg News and other foreign media said they would temporarily suspend the work of their journalists in Russia while they assessed the situation.

In further evidence of the impact of international sanctions and the isolation of Russia, the flag carrier Aeroflot said on Saturday that it was suspending all international flights beginning from Tuesday.

An Aeroflot statement cited new "circumstances that impede the operation of flights”, noting that all domestic routes would continue unchanged as well as flights to neighbouring Belarus.

As the battle between Russia and the West escalates on a number of fronts, the United States has warned the conflict in Ukraine is a threat to the rules-based order.

But at a meeting on Friday, NATO allies rejected Ukraine’s appeal for no-fly zones, saying they were increasing support but that stepping in directly could make the situation worse.

“We have a responsibility … to prevent this war from escalating beyond Ukraine because that would be even more dangerous, more devastating and would cause even more human suffering,” said NATO Secretary-General Jens Stoltenberg.

Putin said on Saturday that any country that sought to impose a no-fly zone over Ukraine would be considered by Moscow to have entered the conflict.

"Any movement in this direction will be considered by us as participation in an armed conflict by that country," the Russian leader said during a meeting with Aeroflot employees.

Ukrainian President Volodymyr Zelensky slammed the Nato response as “weak” and “confused”. “It was clear that not everyone considers the battle for Europe’s freedom to be the number one goal,” he said.

He is scheduled to participate in a Zoom call with the US Senate later on Saturday Washington time.

A humanitarian disaster is also unfolding, with more than 1.2 million people seeking refuge in western Ukraine and in neighbouring countries.

An attack on the Zaporizhzhia nuclear power plant, the largest in Europe, about 225km west of Mariupol, brought the conflict to a perilous moment.

As shells hit the area, a training building caught fire — triggering a spasm of alarm around the world before the blaze was extinguished and officials said the facility was safe.

An official at Energoatom, the Ukrainian state nuclear plant operator, told Reuters fighting had ceased and radiation levels were normal. But his organisation no longer had contact with the plant’s managers or control over its nuclear material, he said.

International Atomic Energy Agency chief Raphael Grossi said the plant was undamaged from what he believed was a Russian projectile. Only one of its six reactors was working, at around 60% of capacity.

Russia’s defence ministry also said the plant was working normally. It blamed the fire on an attack by Ukrainian “saboteurs” and said its forces were in control.

The plant and adjacent territory were now being guarded by Russian troops, Moscow’s envoy to the United Nations said. (Story continues below) 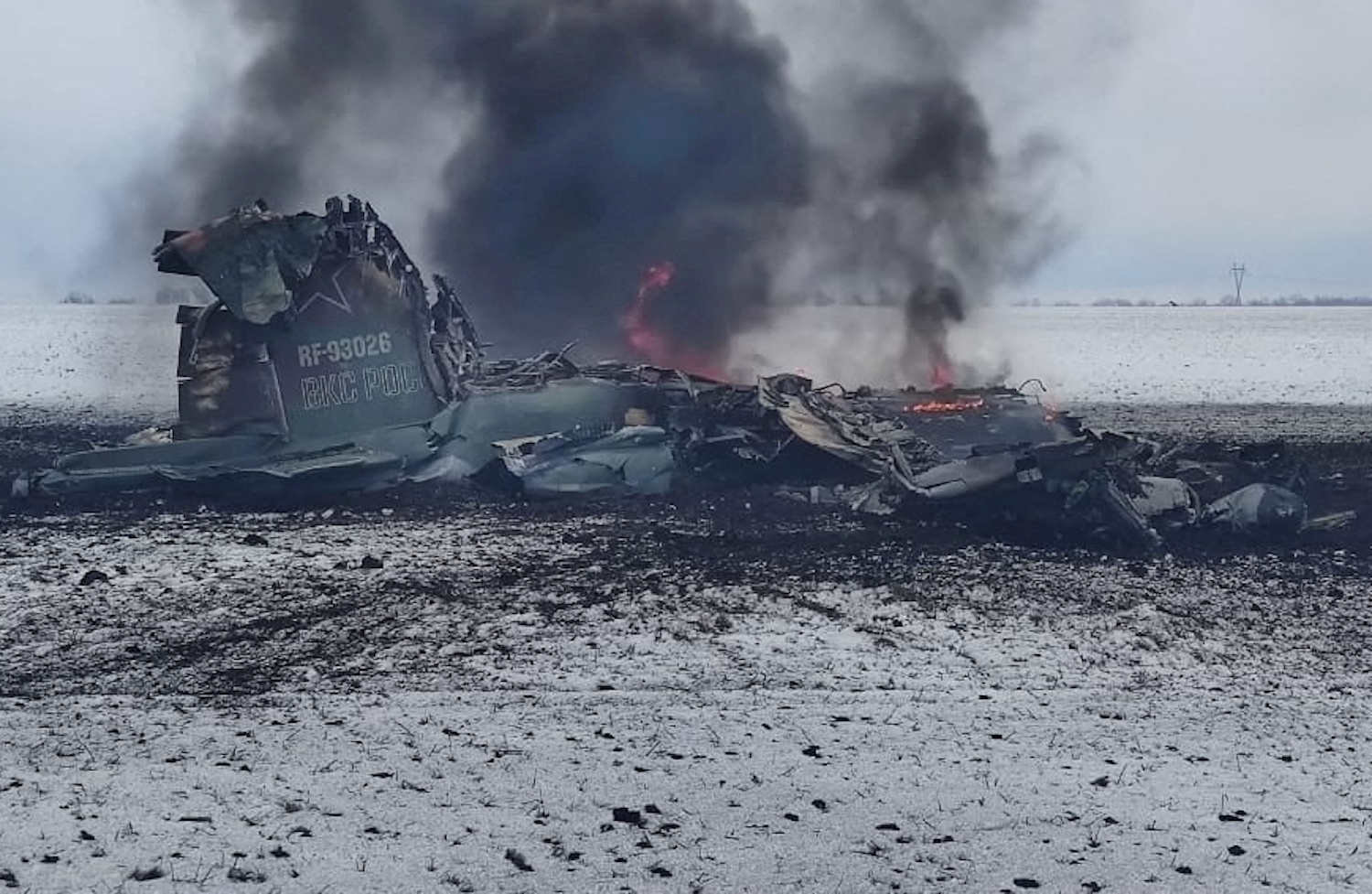 The wreckage of what Ukrainian military officials said is a Russian Air Force assault aircraft is seen in a field outside the town of Volnovakha in the Donetsk region of Ukraine in a picture released on Friday. (Joint Forces Operation/Handout via Reuters)

Moscow denies targeting civilians in Ukraine and says its aim is to disarm its neighbour, counter what it views as NATO aggression and capture leaders it calls neo-Nazis.

Ukraine and its Western allies call that a baseless pretext for a war to conquer a country of 44 million people.

The United States is weighing cuts to imports of Russian oil and ways to minimize the impact on global supplies and consumers as lawmakers fast-track a bill that would ban Russian energy imports entirely.

In Kyiv’s Borshchahivka neighbourhood, the twisted engine of a cruise missile lay in the street where it had apparently been downed overnight by Ukrainian air defences.

Ukrainian presidential adviser Oleksiy Arestovych said an advance had been halted on the southern port of Mykolayiv. If captured, the city of 500,000 people would be the biggest yet to fall.

Russian forces have made their biggest advances in the south, where they captured their first sizeable Ukrainian city, Kherson, this week. Bombing has worsened in recent days in the northeast cities of Kharkiv and Chernihiv.

Ukrainians have been fleeing west, many crowding into Lviv near the Polish border.

James Elder of the United Nations children’s agency said doctors in Lviv were preparing a system to identify children in case of mass casualties.

“A green dot means fine over here, a yellow dot means critical support. They are learning a black dot means the child won’t make it,” he said.