A man walks by rows of plastic bottles of drinking water at a supermarket in Bangkok. (Photo: Varuth Hirunyatheb, Bangkok Post)

Microplastics were detected in human blood for the first time, according to a study that may indicate the potential for particles to travel to organs.

Scientists found 17 out of the 22 healthy people they took samples from had quantifiable amounts of plastic particles in their blood. Researchers said further study is needed to determine the health risks of the materials.

Microplastics are ubiquitous in the environment and can be found in marine animals to drinking water, though the World Health Organization (WHO) has said there’s insufficient information to draw firm conclusions about how toxic they are for people and more research is needed. Over 300 million tonnes of plastic are produced every year and at least 14 million tonnes end up in the ocean where they can be ingested by animals and risk entering the human food supply chain, according to the International Union for Conservation of Nature.

Some materials can take centuries to break down, and growing concerns about their pollutive impacts have spurred bans on single-use plastic bags. But the pervasive presence of synthetic products in modern life -- from water bottles to takeaway containers and clothing -- underscore the challenges of regulating and limiting their use.

The study, funded by the Dutch National Organisation for Health Research and Development and Common Seas, a group working to cut plastic pollution, was published in the journal Environment International on Thursday. The researchers adapted existing techniques to detect and analyse particles that were as small as 700 nanometres in size.

Researchers targeted five common plastics including polyethylene terephthalate, also known as PET and used in bottles, and polyethylene, which is used in food packaging. The team used steel needles and glass tubes to avoid contamination.

The results support the hypothesis that human exposure to plastic particles results in absorption of particles into the bloodstream, but further study is needed to assess the impacts of exposure and whether it is a public health risk, the study said. 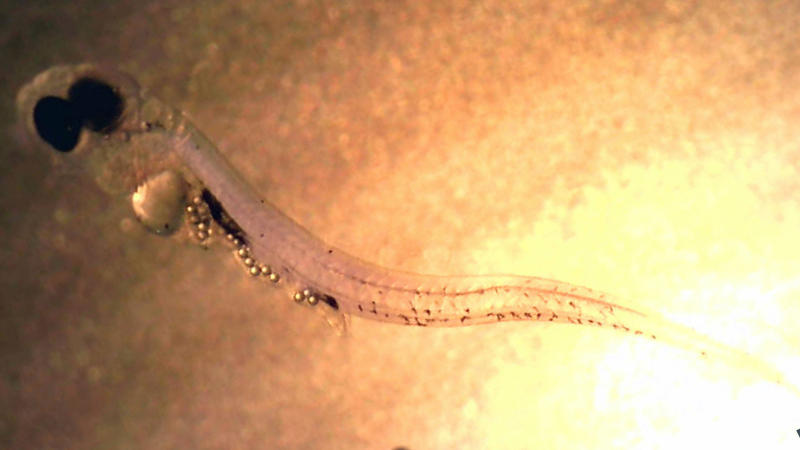 Larval perch that has ingested microplastic particles in this undated photo. (Photo: Reuters)