Smoke from a missile strike rises above Ukraine's strategic Black Sea port of Odessa early on Sunday, as Kyiv warned that Russia was trying to consolidate its troops in the south. (Photo: Bulent Ulent Kilic/ AFP)

KYIV, Ukraine: Latest developments in the Russian war on Ukraine.

Missile strikes rocked Ukraine's strategic Black Sea port Odessa on Sunday morning, but the army said there were no casualties.

"High-precision sea and air-based missiles destroyed an oil refinery and three storage facilities for fuel and lubricants near the city of Odessa," the Russian defence ministry said

Russian troops left scenes of devastation in the city of Bucha, just outside Kyiv, where nearly 300 people have been buried in a mass grave, mayor Anatoly Fedoruk told AFP.  The heavily shelled city is littered with corpses, with 20 bodies in civilian clothing strewn across a single tree-lined street.

"All these people were shot, killed, in the back of the head," Fedoruk said.

"Up to today, 11 heads of local communities in the regions of Kyiv, Kherson, Kharkiv, Zaporizhzhia, Mykolaiv and Donetsk are in captivity," she said in a video message posted on her Telegram account.

"We are informing the International Committee of the Red Cross (ICRC), the UN, all possible organisations, just like for the other civilians who have disappeared."

Ukrainian President Volodymyr Zelensky accused Russian soldiers of planting mines and other booby traps as they withdraw from northern Ukraine. "They are mining the whole territory. Mining houses, equipment, even the bodies of people who were killed," he said in a video address on Saturday.

"Russia is prioritising a different tactic: falling back on the east and south," according to a Ukrainian presidential adviser. (continues below) 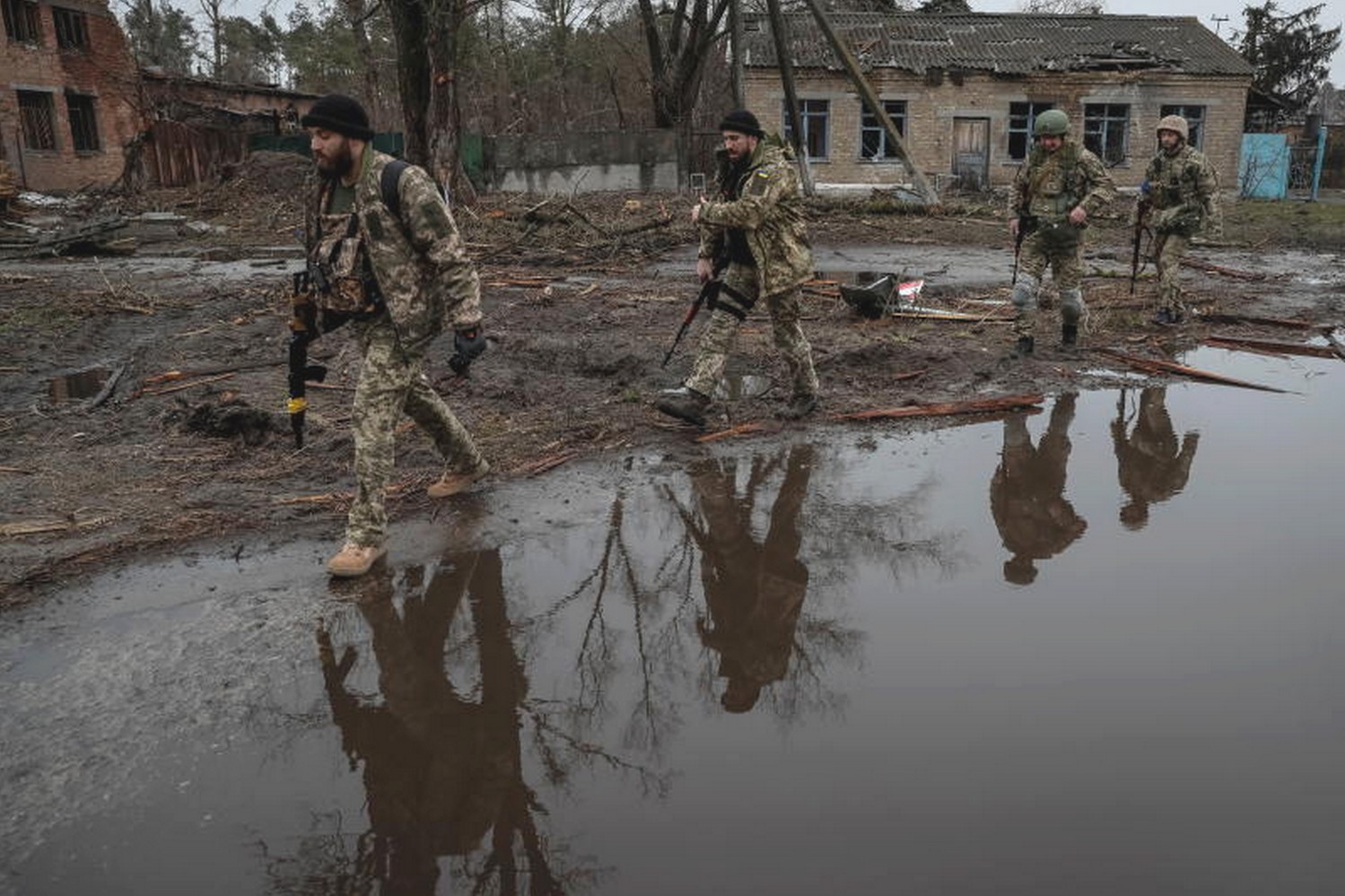 Ukrainian soldiers patrol a street near the village of Kozarovychi, in Kyiv region, on Saturday. (Photo: Gleb Garanich/ Reuters)

The Red Cross said its team left for the besieged southern port of Mariupol Saturday for a fresh evacuation effort.

Ukrainian photographer Maks Levin has been found dead near Kyiv after going missing more than two weeks ago, the government saids. Prosecutors said he was "unarmed" and "killed by servicemen of the Russian Armed Forces with two shots from small firearms".

Ukraine's top negotiator in peace talks with Russia said Moscow had "verbally" agreed to key Ukrainian proposals, raising hopes that talks to end fighting are moving forward. Russia said later there was no progress justifying a meeting of the two leaders.

Russian police detained 211 people at protests against Moscow's military operation in Ukraine, according to OVD-Info, an NGO.

Pope Francis called for a "shared response" to "the growing migration emergency", adding that he was still considering a visit to Kyiv.

A top UN official was to fly to Moscow on Sunday, and then on to Kyiv, to try and secure a "humanitarian ceasefire" in Ukraine..

Both Russia and Ukraine had agreed to meet Martin Griffiths, the UN's under-secretary-feneral for humanitarian affairs, Antonio Guterres said.