A Mexican navy vessel patrols the Gulf of California as part of efforts to save the critically endangered vaquita porpoise from extinction.

SAN FELIPE, Mexico: Mexican naval vessels, spotter planes and conservationists are patrolling the upper Gulf of California in a race against time to save the world's rarest marine mammal from extinction.

Mexico's navy and the environmental organization Sea Shepherd are working together to prevent the vaquita porpoise -- which counts Leonardo DiCaprio among its celebrity defenders -- disappearing forever.

The species is critically endangered, due to illegal gillnets used to catch totoaba, a large fish whose swim bladder can fetch thousands of dollars in China thanks to its supposed medicinal properties.

The navy stepped up surveillance in January amid criticism from the United States that Mexico was not doing enough to protect the vaquita, the smallest porpoise on the planet.

The deployment came after researchers sighted eight specimens of the mammal -- known as the "panda of the sea" for the distinctive black circles around its eyes -- between October and November.

There are estimated to be fewer than 20 individuals left in a small area in the Gulf of California, the only place in the world where the vaquita is found, according to Sea Shepherd.

Navy personnel and activists from the conservation group now monitor the area every day, looking for illegal nets and preventing fishermen from approaching a "zero tolerance zone."

In the skies overhead, naval aircraft look for boats venturing into forbidden waters, in the latest phase of "Operation Miracle" -- launched by Sea Shepherd in 2015 to try to save the vaquita.

"The efforts that we've seen, specifically seen over the last three or four months, mean the vaquita has the best chance that they've had in decades," Sea Shepherd CEO Chuck Lindsey told reporters.

During a tour of the area for media, including AFP, Mexico's navy said it had recovered 70 nets so far this year, compared with 172 for all of 2021.

Gillnets form invisible barriers under the water that can span several hundred feet and trap not just totoabas but also vaquitas, whales, dolphins, sharks and sea turtles, according to Sea Shepherd.

"As we see a dramatic reduction in the illegal nets in the water, we know that the vaquita have a fighting chance," Lindsey said.

Conservationists have previously been involved in a number of violent confrontations with fishermen while working with Mexican authorities to remove illegal nets. (continues below) 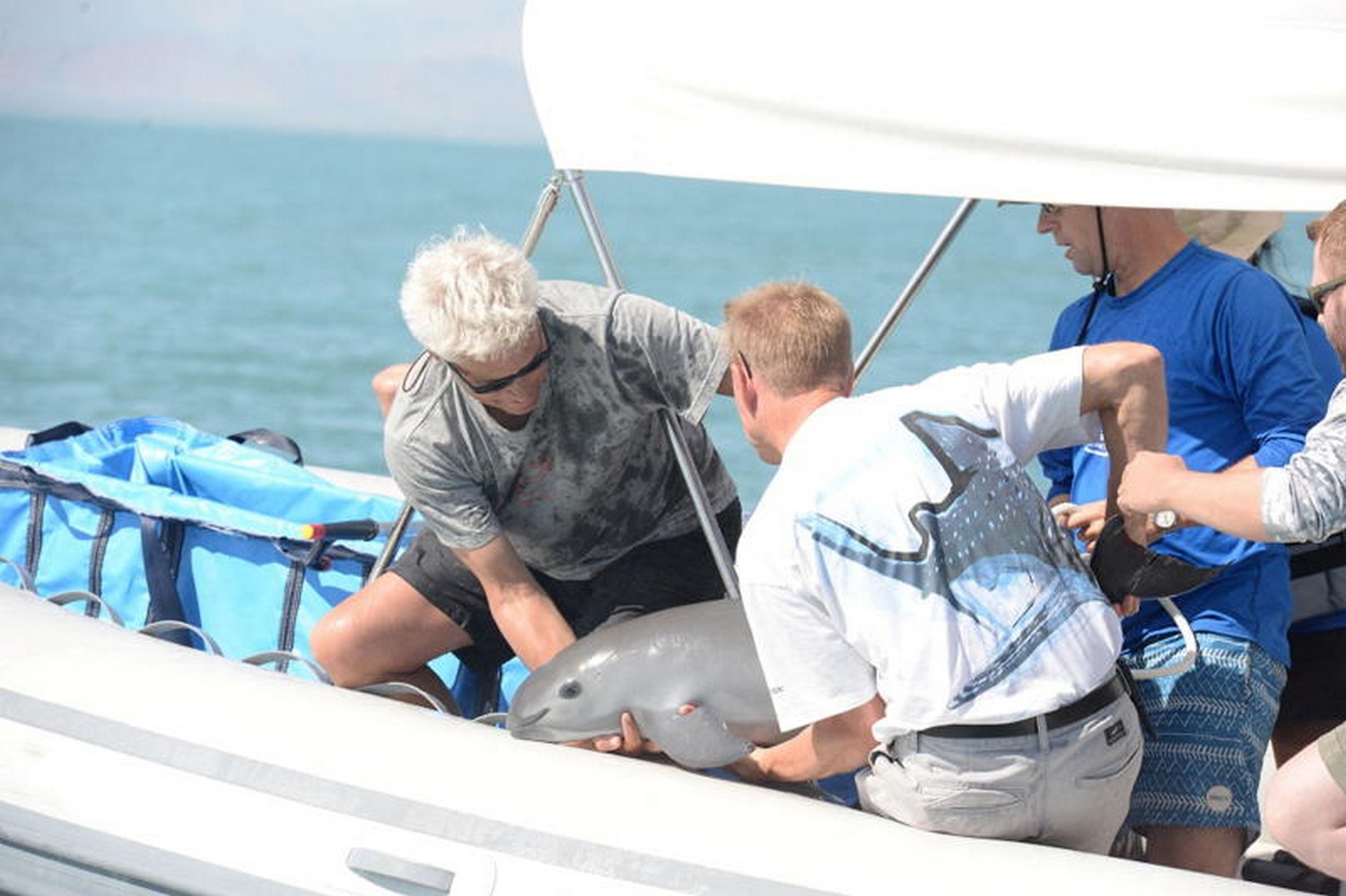 Scientists return a vaquita, a tiny stubby-nosed porpoise on the verge of extinction, into the ocean as part of a conservation project, in the Sea of Cortez, Baja California, Mexico Oct 18, 2017. (Photo: Handout/ Reuters)

It has been listed as critically endangered by the International Union for Conservation of Nature since 1996.

In 2019 UNESCO added the Gulf of California's islands and protected areas to the World Heritage in Danger list due to fears of the imminent extinction of the species.

From dawn, Mexican authorities now check that fishermen in the upper Gulf of California have the necessary paperwork, and later check their nets.

But "they should check beyond the breakwater. There are many boats that don't have permits," fisherman Roberto Lopez told reporters during an inspection.

International attention on the vaquita's plight grew after DiCaprio in 2017 asked his millions of social media followers to sign a petition calling on Mexico's then-president Enrique Pena Nieto to do more to protect the porpoise.

Last August, the Hollywood star accused President Andres Manuel Lopez Obrador's government of abandoning the vaquita, "effectively ensuring that the remaining 10 or so porpoises will die in gillnets."

Saving the vaquita has also become a source of diplomatic friction.

In February, the United States requested consultations with Mexico under a North American free trade pact on efforts to protect the species.

It was the first time a government has invoked the environmental provisions of the United States-Mexico-Canada Agreement, which took effect in July 2020.

Without a resolution, the move from the Washington could lead to imposition of tariffs, although US officials said at the time that it was premature to discuss punitive action.

In the meantime, the Mexican navy promises round-the-clock protection for the vaquita.

"The work that the navy has done, as in other places, is to protect the environment. We're doing that here every day," Admiral Luis Javier Robinson told AFP.

Former actress and model Linda Khathancharoen died on Sunday after a 15-year battle against cancer. She was 66.