Priests pray at body bags in a mass grave in the garden surrounding the St Andrew church in Bucha on April 7, amid Russia's military invasion launched on Ukraine. (Photo: AFP)

The United Nations General Assembly voted to suspend Russia from the UN Human Rights Council over its conduct in Ukraine, although dozens of nations abstained despite the Ukrainian ambassador’s pleadings to defend “the innocent lives lost” in the two-month war.

The rare move Thursday to suspend Russia was backed by 93 nations and opposed by 24. It’s the first time such an action was backed at the UN since Libya was suspended during the final months of Moammar Qaddafi’s rein in 2011. 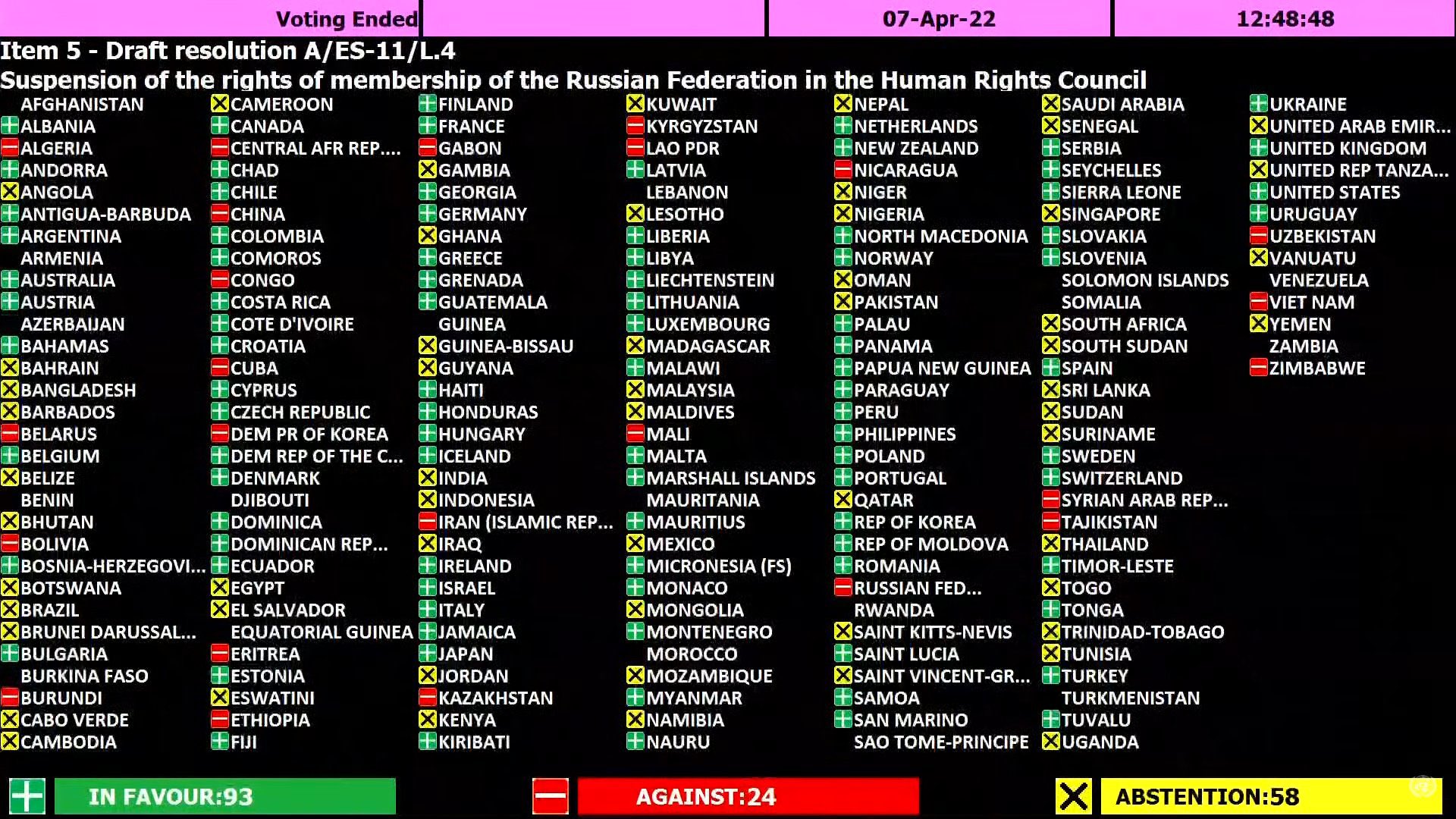 Yet unlike previous condemnations that received overwhelming support, Thursday’s proposal garnered 58 abstentions as countries including Brazil, Thailand, India and Mexico said they wanted to see the results of an independent probe of alleged atrocities completed before a decision on Russia’s membership was made.

Ukraine’s UN envoy, Sergiy Kyslytsya, said the vote would be a defining moment for the global organisation, which he has criticised for not doing enough to stop Russia’s invasion.

Voting to suspend Moscow “is not an option, it is a duty,” Kyslytsya said. He added that “voting no means pulling a trigger, and means a red dot” on the UN voting screen. “Red as the blood of the innocent lives lost.”

Outrage at the large numbers of casualties in towns surrounding Kyiv exploded this week as Russian forces began withdrawing, with bodies of civilians left in the streets and entire neighbourhoods bombed into rubble.

President Joe Biden said in a statement that the UN action shows how “(Russian President Vladimir) Putin’s war has made Russia an international pariah” amid “horrifying” signs of “people being raped, tortured, executed --in some cases having their bodies desecrated.” Russian officials have called the imagery of atrocities fake news and said any war crimes were perpetrated by Ukrainian forces, a view that has garnered little support.

Ukrainian President Volodymyr Zelenskiy has called for Western nations to supply his military with more, and more-powerful, weaponry, as well as seeking a Nuremberg-style tribunal to investigate and prosecute war crimes.

While nations such as North Korea, Iran, Belarus and Syria predictably spoke up in opposition to the UN measure, the abstentions from dozens of other countries mean the lack of “yes” votes -- 82 -- was far higher than previous tallies condemning Moscow’s actions.

Many nations abstaining signalled they thought the vote was a rush to judgment with a probe that started late last month just underway.

Speaking before the vote, Mexico’s President Andres Manuel Lopez Obrador criticised the UN, saying it should have served as a peace broker between Russia and Ukraine and calling for greater diplomacy to end the war. Talks between Kyiv and Moscow have so far been inconclusive.

“How will we resolve the conflict of Russia with Ukraine if there is no intermediary?” Lopez Obrador said at a press briefing in a speech from Mexico. “Isn’t that what the UN is for?” he asked.

Saudi Arabia’s envoy to the UN called the suspension escalatory, while Chinese Ambassador Zhang Jun said the move would lead to “politicisation or instrumentalisation of human rights issues.”

China -- which faces international criticism over its policies in Xinjiang and Hong Kong -- opposes “the selective and confrontational approaches as well as double standards on human rights issues” and opposes “exerting pressure onto other countries in the name of human rights,” Zhang said.

Thursday’s resolution was initiated by US ambassador Linda Thomas-Greenfield this week as evidence poured in from the town of Bucha, in the outskirts of Kyiv, of random killing of civilians.

“We cannot let a member state that is subverting every principle we hold dear continue to participate in the Human Rights Council,” Thomas-Greenfield said on Wednesday in a lecture at the National Defense University. “The UN must be central to our efforts in holding Russia accountable and helping those fleeing this senseless violence.

Where cheers still ring out for Putin