Filipino children whip a flagellant in front of a church in the Philippines on March 24, 2016. (File photo: AFP)

Catholic zealots in the Philippines whipped their backs bloody and raw on Good Friday, as the fervently religious country marked Easter with gruesome displays of faith.

Scores of men -- their faces covered -- walked barefoot as they flogged themselves with bamboo whips under a blazing sun near the capital Manila, while others carried wooden crosses as they were beaten, in a ritual frowned upon by the Church.

Roy Balatbat, his skin still bearing fresh wounds from a public flailing on Thursday, walked for about a kilometre, striking himself and stopping to prostrate in prayer on the hot ground.

"It's punishing but if you have a wish, you will endure the pain," Balatbat, 49, told AFP in Hagonoy municipality, Bulacan province.

"I have been doing this for 30 years since I was a young man. My devotion is that I will only stop when I can't do it anymore."

While most devotees in the mainly Catholic nation spend Good Friday at church or with family, others go to these extreme lengths to atone for sins or seek divine intervention.

Before the grisly flogging begins, the men's bare backs are deliberately punctured to make them bleed.

Veterans of the gory spectacle display scars of previous whippings, while others endure the punishing act for the first time.

"I inflict the wound to the penitents, if there's not much blood coming out, they'll ask for another one so their sins would be forgiven," Reynaldo Tolentino, 51, explained.

"They won't feel the pain when they're doing the penitence as long as they are sincere in doing it."

Good Friday is also usually marked by crucifixion re-enactments in a city north of Manila, but the event was cancelled for the third year in a row due to Covid-19.

About a dozen Catholics regularly have themselves nailed to wooden crosses as penance for their sins. The event attracts thousands of tourists.

"We do not encourage acts of self flagellations and crucifixions," said Father Jerome Secillano, executive secretary of the Catholic Bishops Conference of the Philippines' public affairs committee.

"The suffering and crucifixion of Christ is already enough to save humanity," he told AFP, adding devotees should instead "confess their sins".

The Philippines has lifted most Covid-19 restrictions after a sharp fall in infections and rising vaccination rates.

But the health department warned Thursday of a possible surge in cases as Filipinos dropped their guard and mingled more freely. 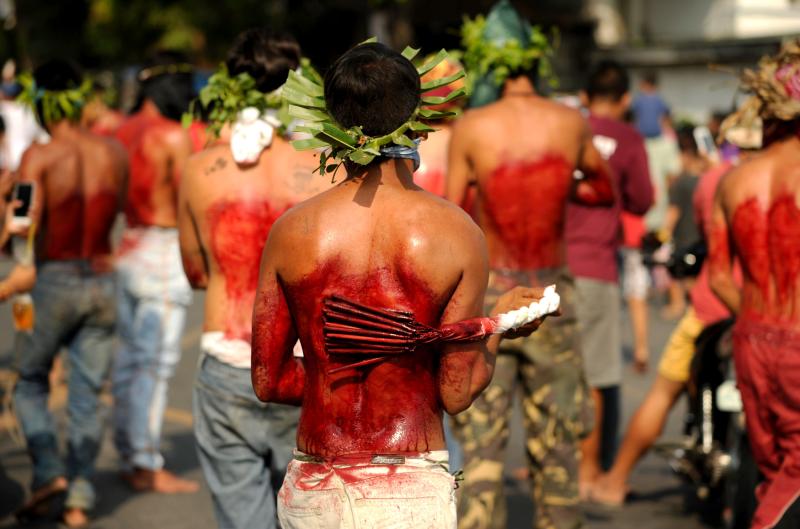 Participants whip their bloodied backs with bamboo as part of their penitence during the re-enactment of the crucifixion of Jesus Christ for Good Friday celebrations ahead of Easter in the village of San Juan, Pampanga, north of Manila on March 25, 2016. (File photo: AFP)