US to host Asean leaders in mid-May
World

US to host Asean leaders in mid-May

Prime Minister Prayut Chan-o-cha and other Asean leaders appear in a video conference on the Covid-19 pandemic on April 14, 2020. (File photo: Government House)

United States President Joe Biden will meet in mid-May with the leaders of Southeast Asian nations, with a likely focus on the rising power of China, the host country announced on Saturday.

The summit, originally scheduled for March, "will demonstrate the United States' enduring commitment to Asean," White House press secretary Jen Psaki said in a statement, referring to the Association of Southeast Asian Nations.

"It is a top priority for the Biden-Harris Administration to serve as a strong, reliable partner in Southeast Asia," the statement said.

The summit, originally set for March 28 and 29 before being delayed without a new date, will now take place on May 12 and 13.

The meeting was postponed amid reports that the leaders of some Asean members had scheduling conflicts, and as the Ukraine crisis continued to deepen.

The US has long said that strengthening its ties to Asia was a foreign policy priority.

On March 29, Biden met at the White House with a key Asean member, Prime Minister Lee Hsien Loong of Singapore, and said he wanted to ensure that the region remains "free and open" -- a reference to what the US sees as attempts by rising power China to dominate international trade routes.

Biden had participated in a virtual summit with Asean leaders in October.

In that summit, Psaki noted in her statement, Biden announced initiatives to expand US engagement with Asean on Covid-19, climate change, economic growth and more.

A tense competition with China has become one of the greatest foreign policy challenges for the US, though other issues -- the chaotic withdrawal from Afghanistan and the war in Ukraine -- have demanded more urgent attention.

The US statement Saturday did not make clear whether the leaders of Myanmar would in fact attend. The administration has accused that country's military leaders of perpetrating a "genocide" against the Rohingya minority.

Asean has sought -- in vain so far -- to find a diplomatic solution since the military took power there in a 2021 coup. 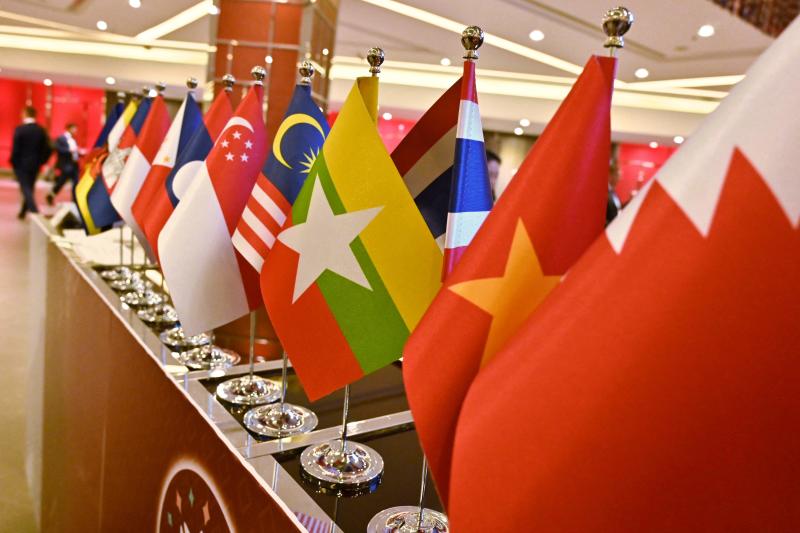 In this file photo taken on Nov 4, 2019, the national flags of the various countries attending the 35th Asean Summit are displayed in Bangkok. (File photo: AFP)