In this picture taken on Oct 13, 2020, Rohingya refugee Julekha Begum, who got married through IMO, a video-call application to "Abdu Hamid" (a pseudonym), a Rohingya hotel worker in Malaysia, cries at her makeshift shelter at Kutupalong Rohingya refugee camp in Ukhia. She was told it would take five days to smuggle her to Malaysia to meet the husband she barely knows. Instead, she spent two months marooned at sea in the hold of a fishing boat with 500 others. (Photo: AFP)

KUALA LUMPUR: Six Rohingya refugees from Myanmar, including two children, have died after being hit by vehicles on a Malaysian highway as hundreds fled an immigration detention centre where a riot broke out early on Wednesday, officials said.

A total of 582 Rohingya escaped the Sungai Bakap temporary immigration detention camp in northern Penang state by breaking down doors and barrier grills, though 362 have since been re-arrested, the immigration department said in a statement.

Malaysia, which does not recognise refugee status, has long been a favoured destination for ethnic Rohingya fleeing persecution in Myanmar or refugee camps in Bangladesh.

Since 2020, however, thousands have been rounded up and housed in crowded detention centres as part of what Malaysian authorities say are efforts to stop the spread of Covid-19.

Police said they were still investigating the cause of Wednesday's riot, while authorities searched for the remaining detainees who had fled.

Two men, two women, a boy and a girl were killed after being hit by vehicles while trying to cross a highway some 8 kilometres (5 miles) away from the detention camp, Kedah state police chief Wan Hassan Wan Ahmad told reporters in a live-streamed press conference.

Prior to the riot, the camp held 664 Rohingya refugees, including 137 children. 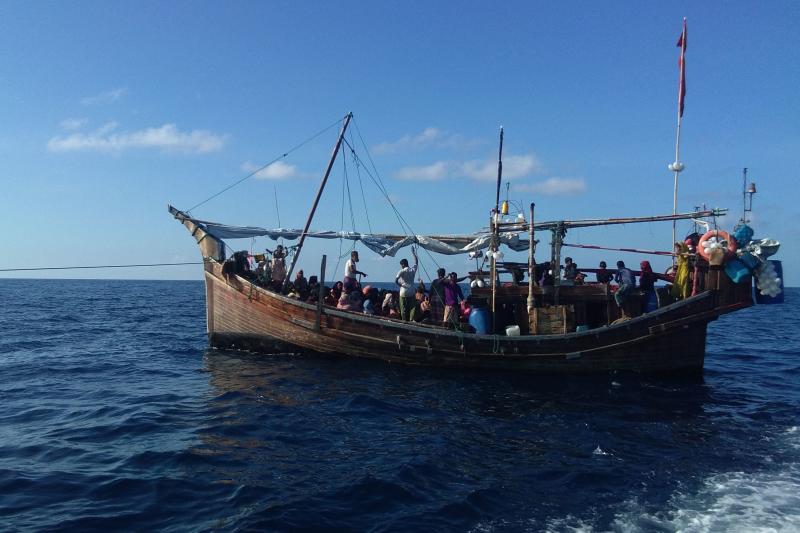 This photo taken on Dec 27, 2021, shows a wooden boat transporting Rohingya refugees after it was intercepted in the waters off Bireuen, Aceh province and were denied refuge in Indonesia. (Photo: AFP)