Russia to 'move away from dollar, lean less on imports'

A Ukrainian Sukhoi Su-25 releases decoy flares as it provides an air support to Ukrainian troops on the ground during the battle near Yampil, eastern Ukraine, on Wednesday. (Photo: AFP)

Months into an invasion that failed in its short-term aim of capturing Kyiv, Moscow is now intensifying operations in Ukraine's eastern Donbas region.

But the Russian minister told China's official Xinhua news agency that the "special military operation... is proceeding strictly according to plan".

China has avoided condemning Russia's invasion of Ukraine and defends its firm friendship with Moscow, with state media often echoing the Russian line on the war.

"If the US and Nato are really interested in resolving the Ukraine crisis, then first of all, they should wake up and stop supplying the Kyiv regime with arms and ammunition," Lavrov said.

The Kremlin had previously called Western arms deliveries to Ukraine a threat to European security.

In his interview with Xinhua published Saturday, Lavrov said that Russia can "retool" its economy to guard against potential "unlawful hostilities".

He added that the sanctions-hit country will focus on moving away from the US dollar and lean less on imports, while boosting its tech independence, Xinhua reported.

Moscow has pursued a "de-dollarisation" policy for several years, calling on partners such as China and India to conduct payments in other currencies.

Since the invasion, Western nations have imposed sanctions that largely cut Russia's financial sector off from the global economy.

Ukrainian prosecutors say they have pinpointed more than 8,000 war crimes and are investigating 10 Russian soldiers for suspected atrocities in Bucha, where dozens of bodies in civilian clothes were found following Moscow's retreat. 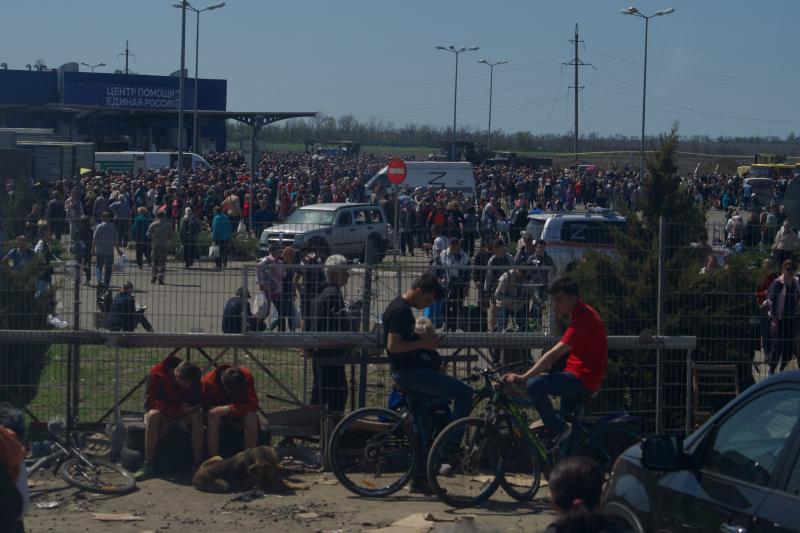 People gather to receive humanitarian aid at the parking lot of a store in the city of Mariupol on Friday, amid the ongoing Russian military action in Ukraine. (Photo: AFP)

A time for mourning