A monk receives alms during a gathering to mark the Buddha's birthday in Mandalay on Saturday. (AFP Photo)

MANDALAY: Thousands of monks celebrated the birth of Lord Buddha at a junta-organised event in Myanmar's second-largest city on Saturday, highlighting a division in the clergy since last year’s military coup.

Since the coup that ousted civilian leader Aung San Suu Kyi, more than 1,800 people have died in a brutal military crackdown on dissent, according to a monitoring group.

Some monks have joined street protests opposing the power grab, while other religious leaders have defended the military junta.

Ahead of the religious observance, a group of Mandalay monks opposed to the coup urged other holy men not to participate in the junta-organised event.

“They are ogres, but they pretend to be human beings,” the Sangha Mandalay monk group said in a Facebook post.

“They have bloody hands. … It is time for our Buddhist monks to oppose this food donation event.”

The last time the event was held in 2019, prior to pandemic disruptions, an estimated 30,000 monks attended.

Government officials and representatives from a military-linked political party hosted the religious ceremony near a former royal palace on Saturday — the day coinciding with a full moon.

Lined up in long rows of chairs, 10,264 monks in crimson and saffron robes listened to prayers, chanted and filed past officials and their family members to collect rice and cash donations.

Mandalay monk Ugga Nyana insisted participation in ceremony was not a political statement, and the clergymen came in the name of love.

“We are coming to this ceremony just to think of peace for people and our country,” he told AFP.

“There is nothing in my mind about political party issues.”

A monastic code prohibits some 300,000 of the clergy in Myanmar from voting or taking part in political demonstrations.

But monks in the Buddhist-majority country are seen as having supreme moral authority, and at times have rallied opposition to military regimes that ruled Myanmar for 50 years before its decade of democracy.

The 2021 coup exposed factions in the monkhood, with hardline nationalist senior clerics supporting the military, which they believe is staving off what they say is a slow Islamic takeover — despite Muslims making up less than five percent of the population.

Myanmar’s military is accused of committing genocide against the mostly Muslim Rohingya minority in 2017. Since then, about 740,000 people have fled to neighbouring Bangladesh to escape the violence.

Buddha’s birthday is celebrated in other parts of Asia — including India, Sri Lanka, Laos, Thailand and Cambodia.

On Saturday, devotees in Yangon visited the famous Shwedagon Pagoda to mark the day as nuns in pink robes prayed.

Many poured water on a Maha-Bodhi tree at the pagoda and some released captive fish and birds to accrue good karma. 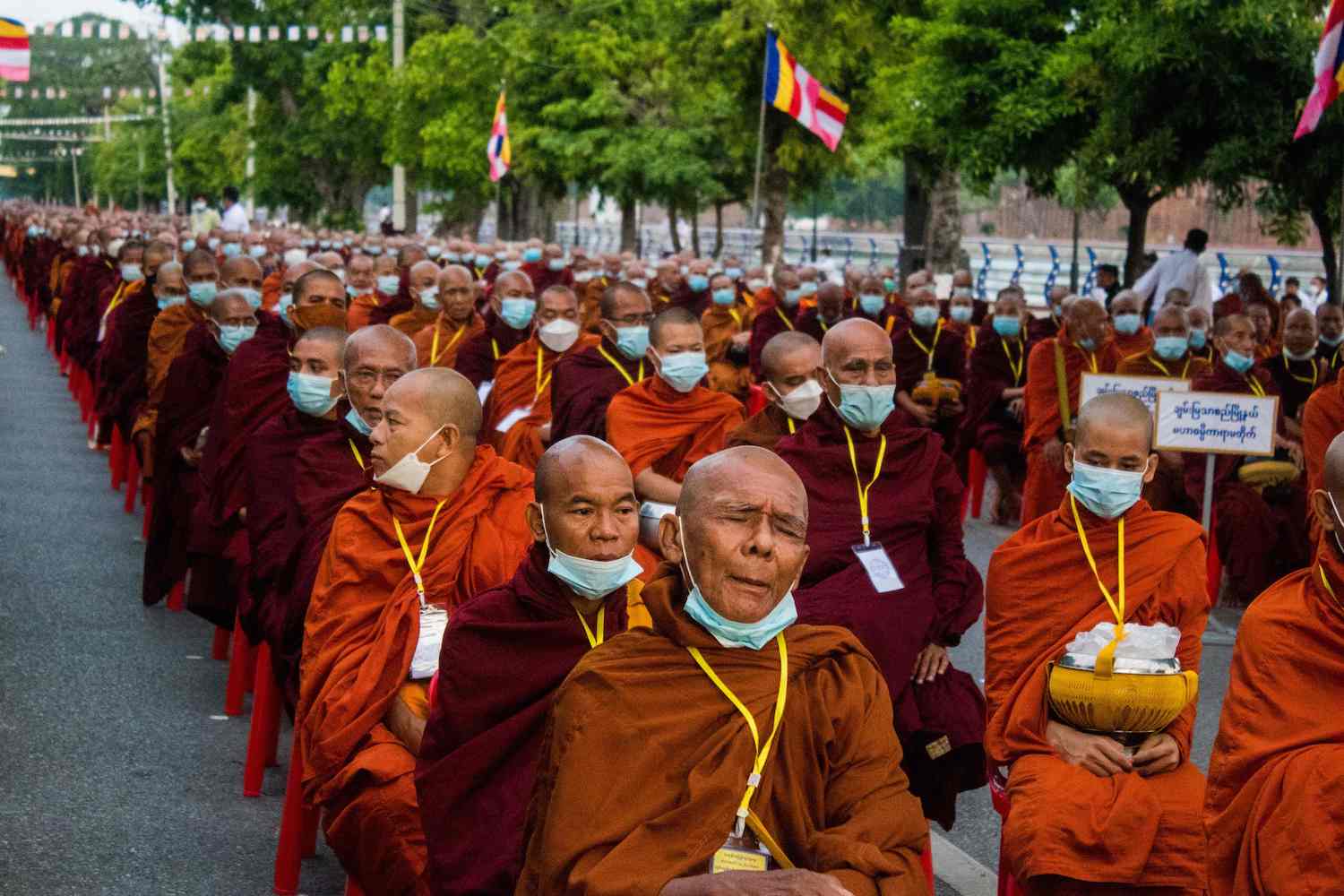 Monks line up to receive alms during a junta-organised gathering to mark the birthday of Lord Buddha near the former royal palace in Mandalay on Saturday. (AFP Photo)

Japan will next month double its limit on foreign arrivals to 20,000 a day, the top government spokesperson said on Friday.