A Warsaw housing complex built in the 1970s and rented by Russia was reputed to be a nest of spies. The city's government has seized the site and pledged to hand it over to the Ukrainian community

above and below right The abandoned former Soviet diplomatic housing complex in Warsaw. photos:  MAIEK NABRDALIK/nyt

Soviet diplomats moved out of the hulking Warsaw housing compound more than 30 years ago. But some Russians stayed behind, sheltering until the early 2000s behind a fence topped with barbed wire from a city that, with the collapse of their empire, had suddenly become hostile territory -- and an important intelligence target.

A mouldering, Russian pulp fiction paperback left behind inside the now derelict property, perhaps provides a clue to the preoccupations of the Russians who lived in the compound that was notorious since its heyday in the 1980s as a nest of spies: Game on a Foreign Field.

"It was always called Spyville and yes, many of these guys were spies," the mayor of Warsaw, Rafal Trzaskowski, said. 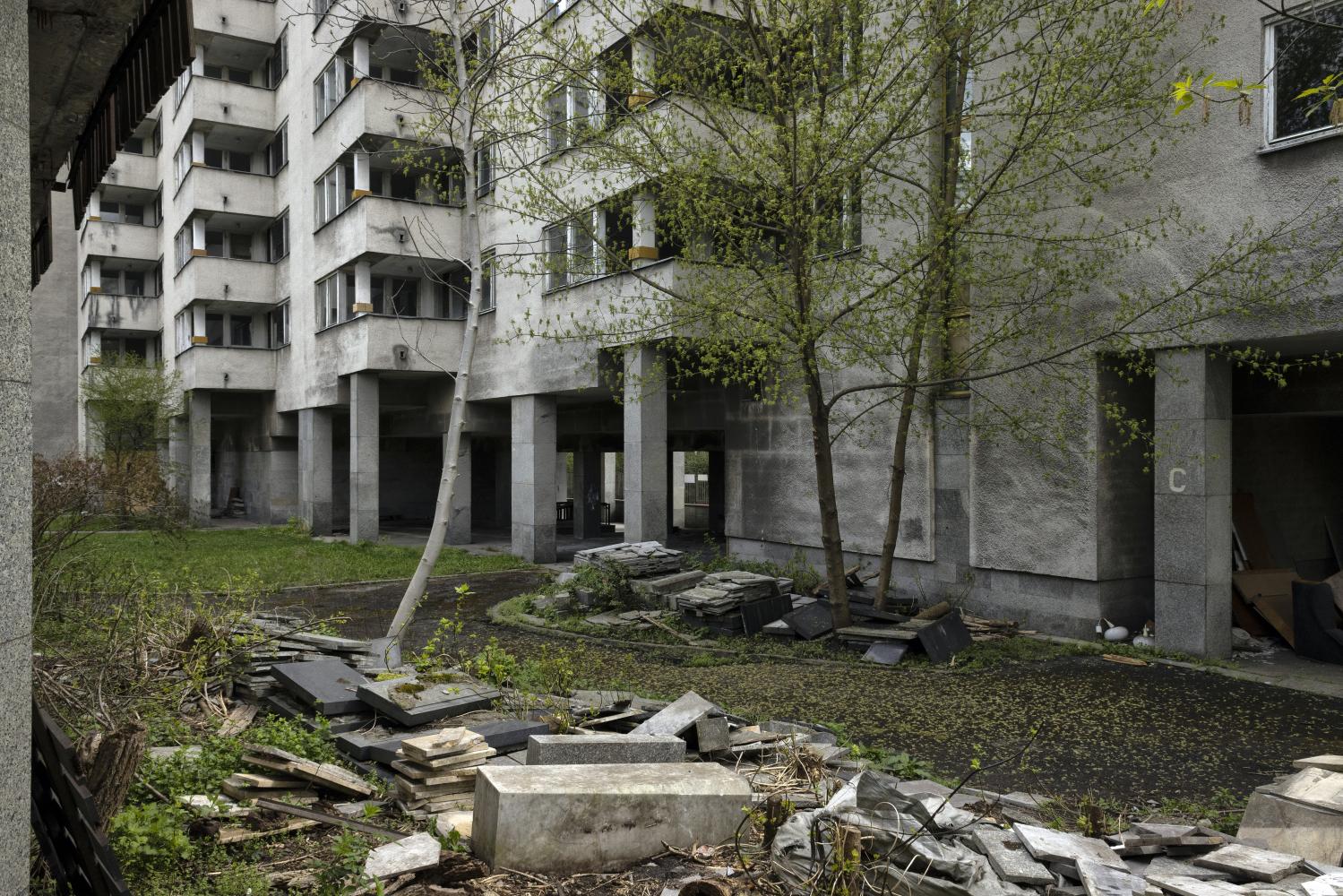 'Spyville' was officially emptied of diplomats and their families when the Soviet empire crumbled in the late 1980s, but some Russians continued to live there until the early 2000s. MAIEK NABRDALIK/nyt

Fed up by Russia's refusal to relinquish the property despite court rulings that it no longer had rights to the site, the mayor last month grabbed it back, declaring that he wanted it for Ukrainians instead.

The number of Russian diplomatic personnel in Warsaw, he said, has been falling for decades, accelerated by the recent expulsion of 45 suspected spies.

"They didn't need such a big infrastructure but they wanted to keep the premises," he said. "That is why we have been fighting with them to get it back."

Built in the late 1970s to house Soviet Embassy staff when Poland was still a member of the Warsaw Pact and a seemingly obedient communist satrap, "Spyville" was officially emptied of diplomats and their families when the Soviet empire crumbled in the late 1980s but stayed in Russian hands. 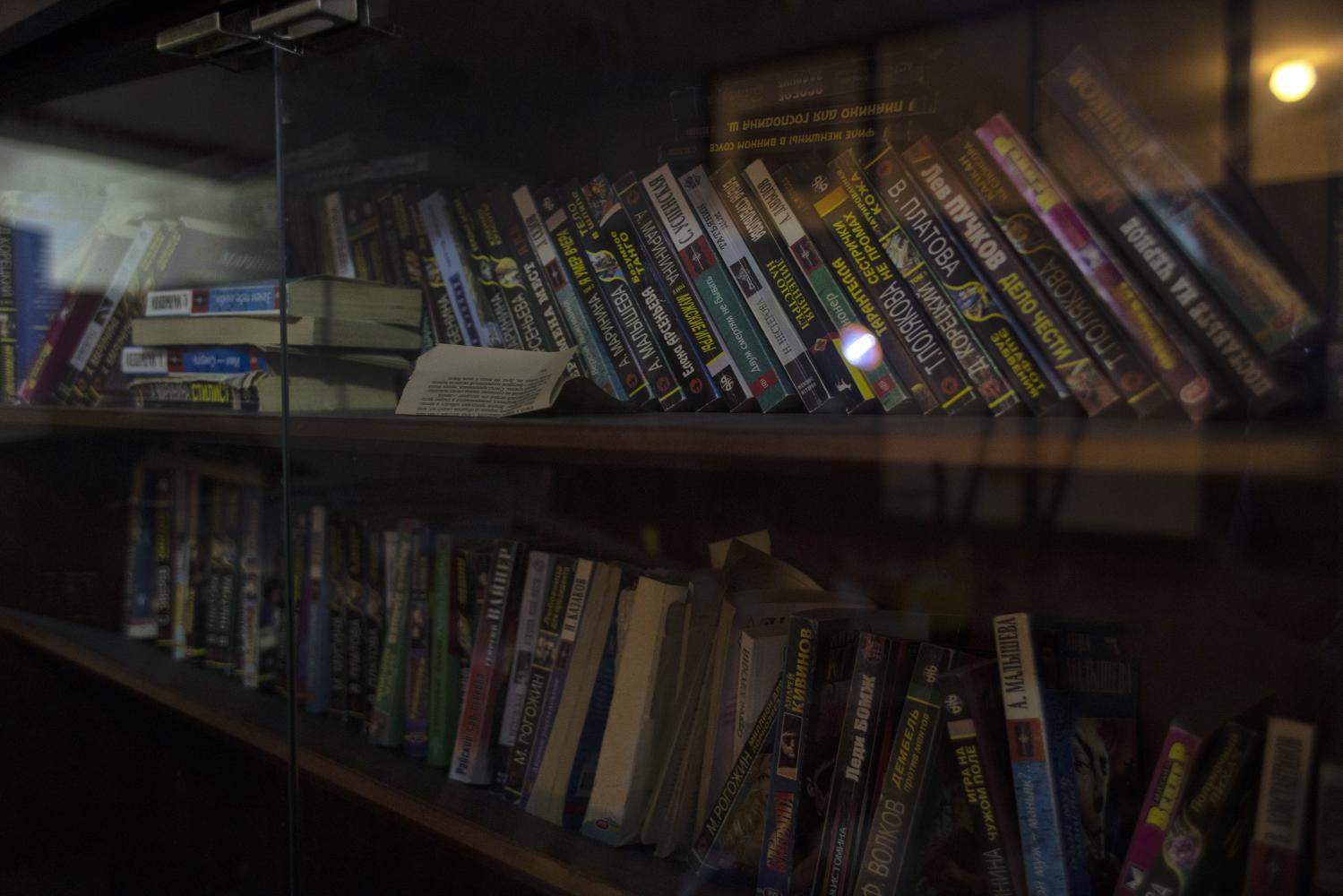 A louche nightclub -- open only to Russians and their guests -- operated there for a time but the compound, a cluster of concrete blocks around a fetid pond, has mostly been associated with espionage.

Polish urban explorers who sneaked into the property found Russian newspapers from as late as 2005, long after the Russians had supposedly left, reinforcing the compound's reputation as a haven for undercover skulduggery.

A place of mystery and decay, it was also a small and deeply unwelcome outpost of the "Russian World", a territorial and ideological concept dear to President Vladimir Putin of Russia.

Mr Putin used the concept to try to justify his invasion of Ukraine, asserting that the country was an inalienable part of Russia. But the idea that Russia has an inviolable right -- for linguistic, historical, legal or other reasons -- to control bits of foreign land, extends far beyond Ukraine to myriad places that the Kremlin views as its own.

During his first years in power, Mr Putin followed the example of his predecessor as Russia's president, Boris Yeltsin, and surrendered foreign outposts that no longer served any clear purpose or were too expensive to maintain. These included a listening post in Cuba and a naval base in Vietnam. Since then, however, Mr Putin has set a very different course, pushing for the return of lost property, including the Cuban spy post he gave up in 2001, a graveyard containing czarist-era Russian graves on the French Riviera, a church in Jerusalem and other sites he views as belonging to Russky mir, or the Russian world.

At the same time, he has resisted giving up anything that Russia still controls abroad, frustrating Japanese efforts to negotiate at least the partial return of islands seized by Moscow at the end of World War II and obstructing Polish demands, backed by court decisions, for the return of "Spyville".

Frustrated by Moscow's refusal to hand over the Warsaw property, which Russia rented under a Soviet-era agreement, Mr Trzaskowski last month entered the compound for the first time, helped by a locksmith armed with metal shears and an electric saw, along with the Ukrainian ambassador and a court-appointed bailiff.

"Spyville is now passing into our hands," the mayor declared.

Security guards hired by the Russian Embassy and an embassy representative put up no resistance. Moscow's ambassador in Warsaw, Sergei Andreev, later complained to Russian state media that the mayor had illegally "occupied" a diplomatic site.

The mayor had merely enforced court decisions in 2016 and again last month, all ignored by Moscow, that voided Russia's claim. The Russians insist they have honoured the terms of the lease; the Poles say they have not.

"The courts passed a judgment that the property was rented out by the Polish state and that the lease had ended. If you are renting a property and not using it for almost 20 years, that of course means that you don't need it anymore," the mayor said.

Russia, as the successor state of the Soviet Union, inherited more than 20 Warsaw properties that had been given or leased to Moscow during the communist era. One of these, which Moscow also tried to hang onto, now houses the Ukrainian Embassy.

But the biggest of these, other than a vast, collonaded embassy building that looks like a palace, is Spyville, located just 1.6 kilometres from the embassy in the south of the city.

"For Russia it is symbolic," the mayor said. "They just push and shove over questions of a symbolic nature, asserting their importance in Warsaw and in Poland."

He added: "This is all a legacy of Soviet times. The biggest embassy properties in Warsaw are those of the Russian Federation and the Chinese, simply because in the communist times they were getting the best plots of land." 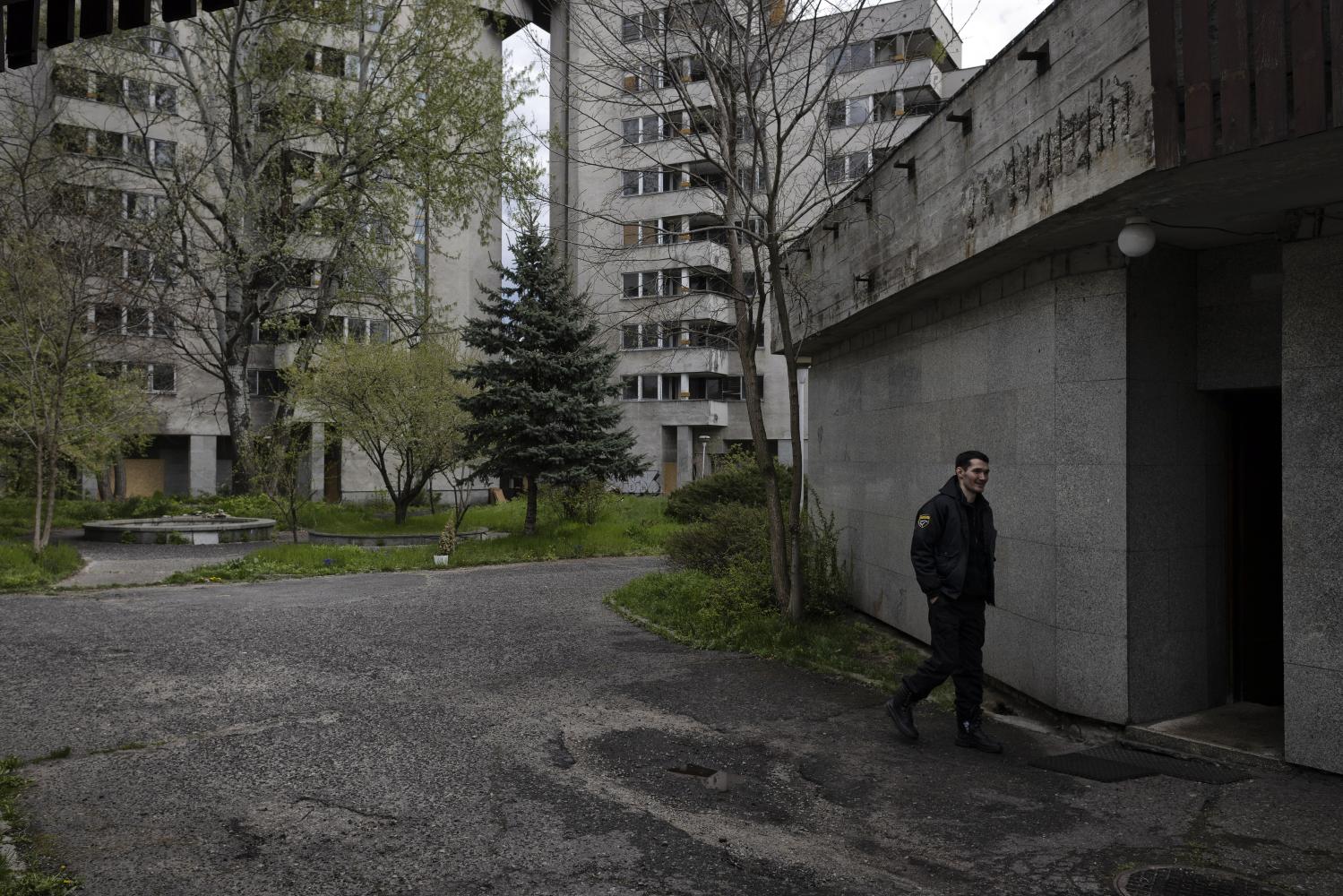 Poland, he added, has no designs on buildings owned by Russia, only property that was rented to Moscow "under very favourable conditions for obvious reasons" at a time when the Soviet Union had tens of thousands of troops stationed in the country to enforce its will.

Krzysztof Varga, a Polish writer and journalist who grew up near the former Soviet housing complex, said the place has been known as Spyville for as long as he can remember.

"The whole district contained many buildings that belonged to the Russians," he said, recalling that KGB agents working in an office nearby used to hang out at a restaurant in the neighbourhood.

Because there were so many Russians in the area nobody bothered much about Spyville, he said. "Everybody knew it was the Russkis and that was it."

But what the Russians were doing there was never clear, particularly after Soviet diplomats left and a nightclub, Club 100, opened on the premises, leading to complaints, according to one Polish media outlet, "of loud parties with more Kalashnikovs than guests" and frequent police raids. 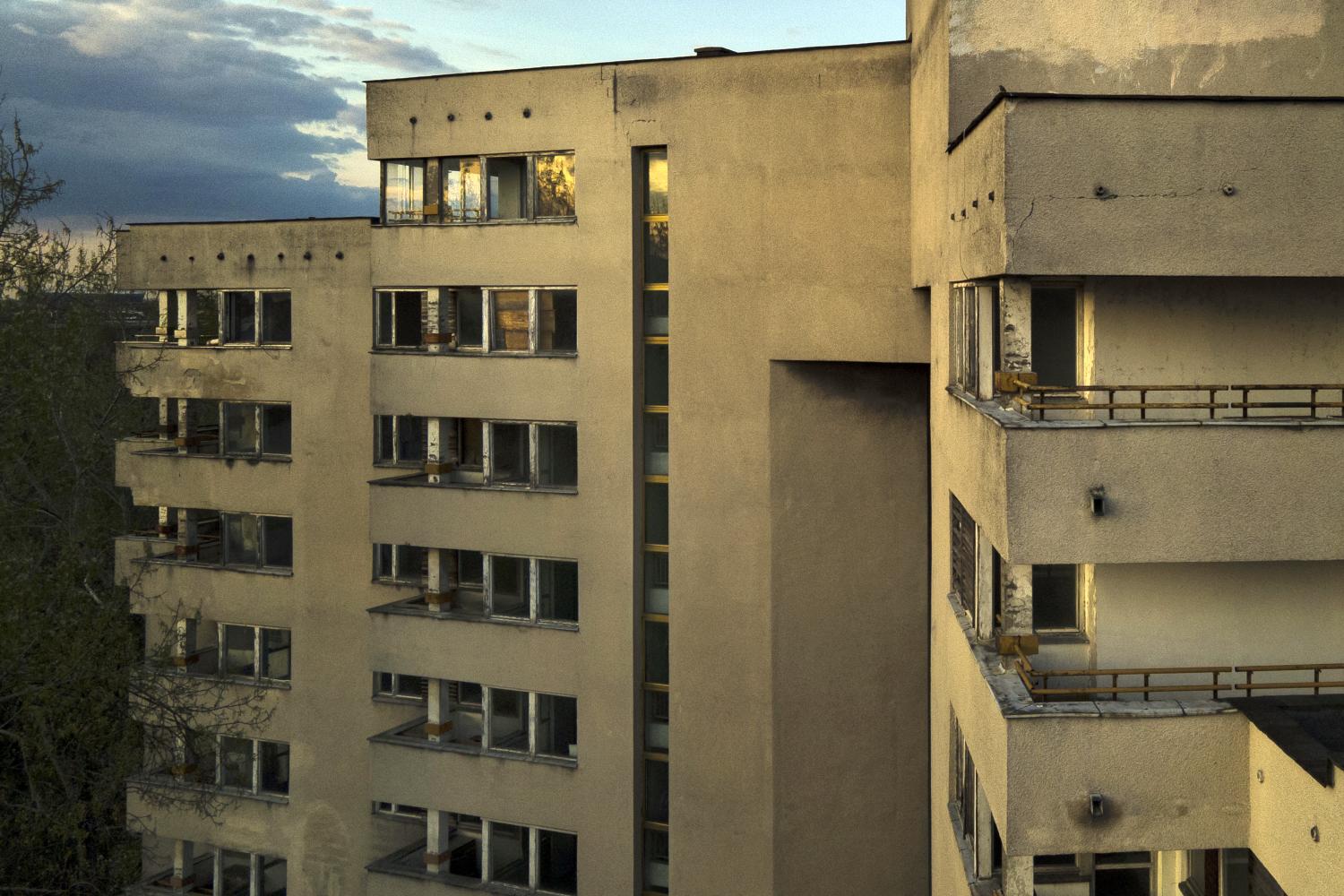 The mayor said he has no idea what was going on inside the compound. "Somebody was using the building at the start of the century for a few years but we could not check because we could not even enter without a court order," he said.

Club 100, long closed, stands across an untended garden from the main residential blocks, a row of concrete, modernist style buildings faced with marble at their base.

They combine late Soviet aspirations for luxurious living -- spacious apartments with balconies, glass-faced cabinets and orange sofas from the 1970s -- with the feel of a prison thanks to stained walls, coils of barbed wire and the stench of rot and ruin.

A pile of garbage next to the entrance to Block C, sealed with a piece of particleboard, contains an old mechanical typewriter with a Cyrillic keyboard, smashed pieces of furniture and rusty metal film canisters from Mosfilm, the Soviet Union's premier film studio.

Across the pile are draped strands of film from a dark 1989 Russian fantasy thriller, To Kill a Dragon, the story of a village liberated from tyranny but unwilling to accept its newfound freedom.

The movie was banned in the Soviet Union, convulsed at the time of the film's release by angry debate over the wisdom of the country's retreat from communism, but was still shown to and, it seems, appreciated by Soviet diplomats and spies living in Warsaw.

Mr Trzaskowski said he initially planned to turn the recovered property into a shelter for refugees from Ukraine, of which Poland has taken in nearly 3 million. 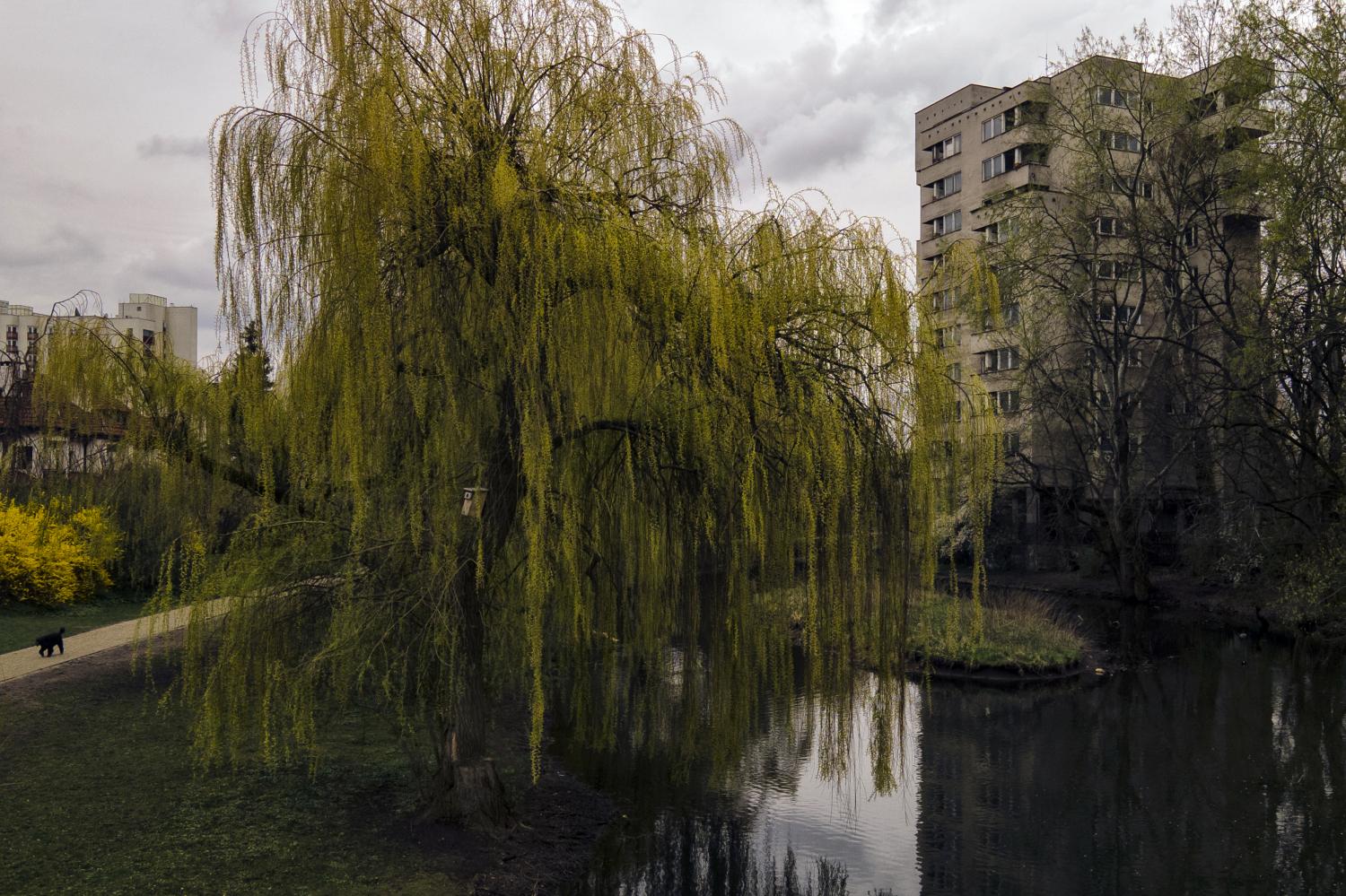 Warsaw seized the complex and turfed out its remaining Russians. MAIEK NABRDALIK/nyt

But he found Spyville in such a state of disrepair -- all the elevator cables had been cut and one block is structurally unsound -- that engineers now need to decide whether the buildings, the tallest of which have 11 floors, can be salvaged or need to be torn down.

Whatever is decided, Mr Trzaskowski added, "it will definitely serve the Ukrainian community" in one way or another. On that, he said, municipal authorities and Poland's central government, which otherwise agree on little and frequently fight, "are on the same page".

Another mass shooting, another US gun control debate